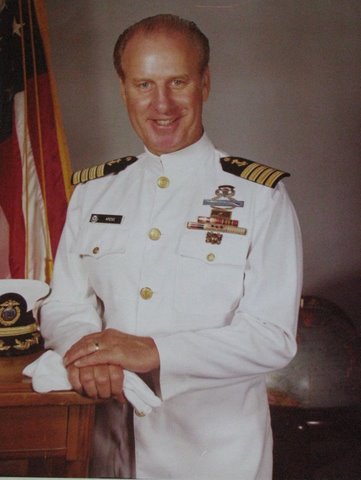 John Arens is pictured in his Merchant Marine captain’s dress uniform in the 1970s when he was attached to the U.S. Navy. Note the Combat Infantryman’s Badge on his chest and his jump wings from his service in the Rangers during the Korean War. Photo provided by John Arens

John Arens served as a teenage Merchant Mariner in World War II, become an Airborne Ranger in the Korean War, graduated from diving school in the 1960s, spent 11 years as a Navy SCUBA diver in the Arctic before skippering a Navy spy ship during the Cold War and completed his 40-year military career as the captain of a fast transport ship during “Operation Desert Storm” in 1991.

Arens, who is 83, lived with his wife, Dorothy, at Sandhill Gardens Retirement Home in Port Charlotte, Fla. says he is still fit for his age.

John Arens is a remarkable guy.

John Arens is pictured in the water in his wet suit off Tooley, Greenland in 1970 practicing diving under the ice with a buddy. Photo provided

Like when he went back to sea in 1965 after trying an unsuccessful venture as a small businessman.

“I was 39-years-old and went to work for the Military Sealift Command. They were looking for an Arctic SCUBA diver,” he said. “They asked me if I thought I could complete the Navy’s Diving School in Key West. I told them ‘Why wouldn’t I make it? I’m an Airborne Ranger.’

”At the diving school, Navy Seals were our teachers and they were unmerciful to us,” the old salt recalled 45 years later. “The lieutenant at the gate in Key West said, ‘Sir, you’re 39-years-old. You won’t last a week in this school.’

“A Class-A Navy Seal at the diving school take one look at me and screamed, eyeball-to-eyeball, ‘Sir, I have permission to drown you, sir!’

“He proceeded to try and drown me. He made a big mistake, because I could hold my breath longer than he could,” Arens recalled. After graduating, the Seal who had given me a bad time when I first showed up said, ‘You’re 39-years-old and you made fools out of all of us.’”

A polar bear stretches to get closer to a bunch of crewmen aboard a ship in the Arctic. Arens uses the picture to show school children when he talks to them about his time as a Navy diver in the Arctic. Photo provided

Arens, who was still technically in the Merchant Marines but attached to the Military Sealift Command, was assigned to a ship headed for the Arctic as a Navy SCUBA diver. He helped reopen ports every summer along the “Dew Line”—the string of satellite tracking stations across the top of the world protecting the U.S. from incoming enemy missiles.

“Our job was to hook-up all the buoys connected to the underwater fuel pipeline taken out during the winter by the ice. My whole career in the Arctic was making sure these fuel lines were ready to used when the ports reopened in the summer,” he said

“We resupplied the U.S. airbases with fuel from Goose Bay, Labrador all the way up to Tooley, Greenland above the Arctic Circle,” Arens explained. “When a tanker came into the harbor and anchored it pulled in the line attached to the buoy that was hooked to a flexible fuel line they connected to the ship and began pumping their cargo ashore.”

In 28-degree water it was cold, dangerous work. The divers had to keep an eye out for polar bears that might mistake them for seals, one of the carnivore’s favorite meals. There were also leopard seals and killer whales they had to watch out for, too. 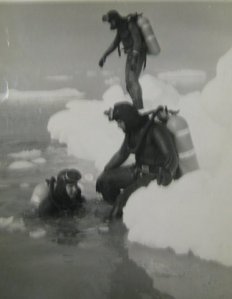 On April 2, 1962 John Arens and a bunch of other recruits graduated from the Navy’s Diving School in Key West. He’s the guy behind the diving tanks on the right. Photo provided

Although they dove in less than 75 feet of water, most of the time, it could be treacherous. Visibility was a problem at times and Arens would train his divers on the deck of their ship with masks taped over so they couldn’t see what they were doing.

“The divers wore thick gloves when they were underwater. They had to learn to operate while wearing these gloves and inserting big bolts into a pipeline they were connecting in zero visibility,” he said.

While diving with a new recruit, Arens got trapped on the bottom in a tangle mass of discarded buoy cables. It was a scary situation.

“The guy who went down with me was on his first dive. I told him to stay 20-feet above me while I went down to check out the jumble of wires on the bottom,” he said. “I got underneath the jumble and all the wires fell on me. It took me 20-minutes to dig myself out with the knife we always carried strapped on our right leg.”

Diving in the Arctic was a summertime activity for Arens. During the winter he spent his time aboard a Navy spy ship searching for Russian submarines around the world. During the Cold War he and the spy ship, he ended up commanding, would pick up the sound of an enemy sub underwater hundreds of miles away. They could tell in an instant what ship it was from the distinctive sound its propeller made. He had little to say about these activities.

When “Operation Desert Storm” came along in 1991 the Navy called up a number of retired captains including Arens.

“I got a call from Sealift Command, the voice on the other end asked me if I would skipper the largest ship used in Desert Storm—the 946-foot transport USNS Antares. It kicks up a rooster tail when running at full speed—32 knots,” the caller said. He added, “We need you now!”

“Wait a minute, I’ve got to ask my wife if I can go to sea again,” he recalled with a chuckle. He made one trip to Saudi Arabia with a ship full of Abram tanks and equipment and came home by way of Germany.

John Arens joined the Merchant Marines at 17 at the end of World War II. He made a couple of voyages  in a freighter filled with thousands of gallons of high test aviation gasoline before the shooting stopped. That was the start of a military career that would span four decades and encompass three service branches.

“Everyone knew the German sub skippers were told to torpedo the tankers because they were carrying the fuel. We carried 150,000 barrels of aviation gasoline,” the 83-year-old Port Charlotte, Fla. resident explained. “They called us ‘Zippo Lighters’ because of what happened if a German torpedo struck our ship. We’d go up in a ball of flames just like a ‘Zippo.’

Sixty years after the incident, Arens is still sore about what happened to him when the Korean War broke out in the summer of 1950.

“By then I was third officer aboard a tanker when the captain called me into his office aboard ship and told me he had some good news and bad news for me,” he recalled. ‘Give me the good news, first I told him.

“’You get to go home. The bad news is you’ve been drafted into the Army,’ the captain said. In those days, serving in the Merchant Marines didn’t negate your military obligation.

“When I walked into my draft board back home the woman in charge said to me, in front of a bunch of other people, ‘So you’re the Draft Dodger we’ve been looking for!’” I tried to explain to her I had been aboard ship serving in the Merchant Marines when my draft notice arrived at home. She didn’t buy my explanation.

“I had to present my records to the FBI to prove I wasn’t a draft dodger. They said my records showed I was at sea and everything was alright. The FBI told me to report back to my draft board and carry on,” he said.

Arens found himself in the Army a short while later. After graduation from boot camp he and two buddies were sent to a repo depot in Korea.

“I happened to see this wounded guy wearing a black beret while we were in Tokyo waiting to go to war. I walked up to him and said, ‘I didn’t know the French were fighting in Korea.’ He looked at me and said, with a Southern accent, ‘I’m not French I’m from Alabama.’

They struck up a conversation and found out the fellow with the beret was an Airborne Ranger. The injured warrior told the trio if they were willing to jump out of an airplane without any prior training he could probably get them into the Rangers. They agreed to give the elite airborne outfit a try.

“I figured we’d stay alive with the Rangers better than the regular Army. Furthermore, I wanted to get to the front lines and do a little fighting,” he said.

When they met their new Ranger company commander the captain asked the three soldiers, “What Airborne outfit are you men from in the States?’

“We’re not paratroopers. We don’t even know how to put a ‘chute on,” Arens replied.

“’Well what the hell are you doing here’ the captain replied. 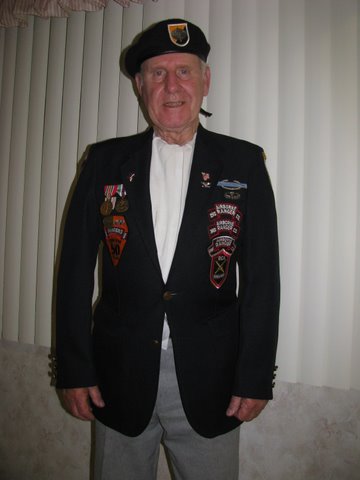 At 83 John Arens’ blue blazer is covered with medals and ribbons from the wars and military adventures he’s been involved in during his 40 year military career. He is wearing his Airborne Rangers beret he received when he served in the Army during the Korean War. Sun photo by Don Moore

“I told him we might not know much about jumping out of an airplane, but we understood he needed men right now,” Arens observed. “We’ll jump without any training if you’ll give us a try.

“We were sent to a black Ranger outfit in Korea that was qualifying their men on the parachute jump. When we told the black troops we were gonna jump without any prior training they thought we were nuts,” he said.

Before the day was done Arens and his two buddies jumped three times from the open door of a C-46 transport plane and got their airborne wings. They were officially Rangers.

He was assigned to the 187th Airborne in Japan and became a sergeant. He went to war in Korea with the 187th which was an Army unit. After the war Arens returned to the Merchant Marines.

A decade later he got a call from Military Sealift Command. They were looking for a SCUBA diver who would agree to dive in the Arctic. Since Arens had some shallow water diving experience the Navy got in touch with him.

Even though he was 39-years-old, he finished the Navy’s Diving School in Key West in 1965 and spent the next 11 years as a Navy diver in the summer in the Arctic. In winter he served aboard a spy boat tracking Russian submarines with sophisticated sonar devices.

He retired the first time from the Navy in 1987 after more than 30 years. However, when “Operation Desert Storm” broke out he was called back at 64, to run a high speed transport ship that took tanks and other equipment to the war in Iraq. Before he could go to sea he checked with his wife.

After that he called it quits.

Arens and his wife, Dorothy, lived in Sandhill Gardens Retirement Home in Port Charlotte, Fla. until her death.

This story first appeared in the Charlotte Sun newspaper, Port Charlotte, Fla. on Monday, May 10 and Thursday, May 13, 2010 and is republished with  permission.

Captain John Arens has done it all which is obvious from the emblems and ribbons on his chest. He wears the Combat Infantryman’s badge, Aviator’s Wings, Airborne Ranger’s insignia, Diver’s insignia, and ribbons that cover World War II, Korea, Vietnam, and Desert Storm. Photo by Don Moore/Punta Gorda Air Show March 25, 2012.