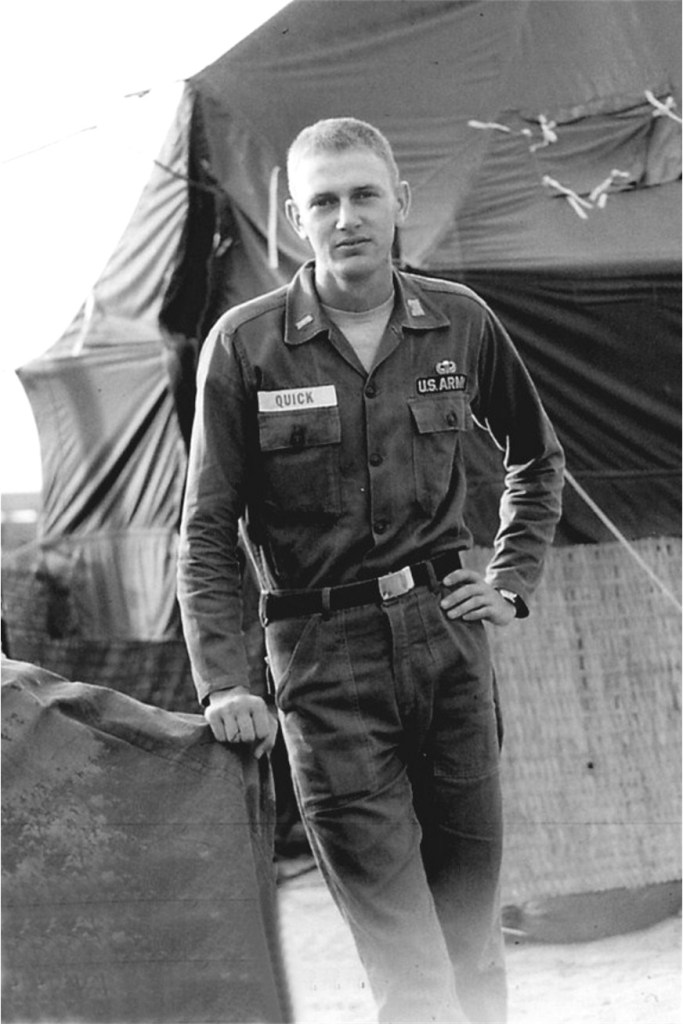 1st. Lt. Gordon Quick is pictured in Vietnam when he served with the 588th Combat Engineer Battalion attached to the 1st Division in 1965. Photo provided

Gordon Quick, who lives off Burnt Store Road south of Punta Gorda, Fla. near the county line, served in the 588th Combat Engineer Battalion in Vietnam in 1965-1966. His unit was under command control of the 1st Infantry Division—the “Big Red 1” with division headquarters and the support command located at Tây Ninh.

Quick was a platoon leader in B Company, 588th Combat Engineer Battalion located at Phouc Vinh home of the 1st Brigade of the 1st Division.

“Mostly we built latrines, mess halls and gun emplacements for the artillery, and helicopter landing pads,” the 67-year-old former 1st lieutenant said. “When the 1st Infantry guys came back from the field and saw the new facilities, you can’t believe how much they appreciated us. We hit a home run over there with the troops in the field.”

“During the year I was in Vietnam we didn’t get involved in any combat action, but we did have two men killed due to enemy action. We did perimeter guard duty next to the airstrip,” he said.

They did their duty, did it well, came back in one piece and went on with their lives. While going to Vietnam they had some crazy things happen.

“We left on the first leg to Vietnam from the airport at Richmond, Va. on a civilian charter airline. There were six or seven DC-6s—four engine prop jobs—and one Boeing 747 jet,” Quick recalled. “Our battalion commander decided it would be better if all the key personnel went on the 747 to the west coast. The idea was to have key personnel in place when the rest of the battalion arrived because the 747 was faster.’

“The brass and the 747 never got off the ground that day. It developed mechanical trouble,” he said. “Meanwhile the DC-6s were lumbering across the country headed for the west coast. However, several were delayed due to engine problems that developed en route.’

“By the time we reached the west coast it was chaos. The DC-6s were scattered all across the country and came in a day or two late. The 747 arrived in California a day or so after everybody else,” Quick said. “Our advanced planning for going to war was shot.”

Even before they took off from Richmond they suffered their first casualty.

“When we were boarding the plane, the guy in front of me, who had his rifle slung over his shoulder, was having trouble handling his duffle bag.  As we were going down the center isle of the plane, he dropped something and reached over to pick it up. At this time a stewardess who was standing nearby inquired, ‘Can I help you?’ 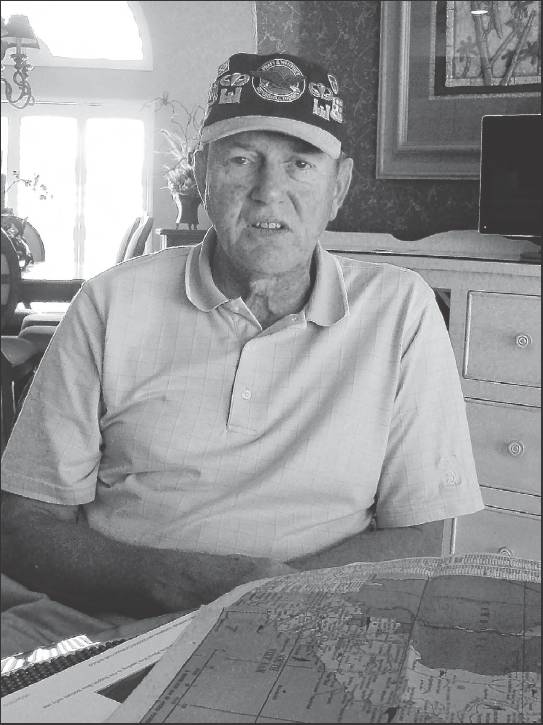 Gordon Quick wears his ball cap with his 588th unit emblem, 168th unit emblem, and airborne pin as he looks at a map of Vietnam before him on the table. Sun Photo by Don Moore

“She bent down to pick up something from the floor at the same time as the guy with the rifle slung over his shoulder. The butt of the rifle came up and hit her square under her chin and knocked her out. The stewardess was not seen the rest of the trip. She was our first casualty of war.

“When we were about to board ship and leave for Vietnam, our battalion commander got all the officers together and told us, ‘I don’t want to see any 588th unit emblems on any enlisted soldier’s cap when we get over there. Secondly, all beards and mustaches must go. This applies to all officers and enlisted. The enlisted men threw all of their 588th unit emblem pins overboard as they went under the Golden Gate Bridge on the way out.’

“We got to Vietnam and we were met on the ship by a full bird colonel who commanded the 18th Engineer Brigade. He told our battalion commander, ‘None of your enlisted men have their 588th unit emblems on their baseball caps. Aren’t you proud of your outfit?”

Quick added, “To make matters worse, the full bird colonel was wearing a long waxed handle bar mustache. It wasn’t long before our troops grew mustaches too,” he chuckled.

“Our first real job in Vietnam as combat engineers to impress the 1st Division Headquarters at Di An was to improve the drainage ditches along the roads in the Di An compound. Unfortunately, while installing a drainage ditch using a grader, we cut the main communication cable between the outside world including Saigon MACV headquarters,” Quick said. “There must have been 10,000 wires in this cable. It took several days for experts to repair it.”

The 588th B Company’s crowning achievement in Vietnam during the year he served with the battalion was refurbishing the dirt airstrip at Phuoc Vinh for the Big Red 1.

“We rebuilt the airstrip the best we could using a grader on loan from the 362nd Engineers, a CAT D-8 dozer, a pay loader, and five-ton dump trucks that we owned. We heard the airstrip had been built by the Japanese during World War II. We reduced a swale in the runway, added runway turnarounds needed for the big C-130s and C-123s that used it, and created the access roads on both sides of the runway. No fixed wing aircraft stayed overnight, in fact they never turned their engines off,” he said.

When Quick returned to the U.S. he spent his remaining service time as the battalion operations officer, 2nd Battalion, 4th Engineer Specialist Training Brigade at Fort Leonard Wood, Mo. He returned to civilian life and worked for Pratt & Whitney (P&W), manufacturer of flight and land power generating jet engines. Quick, who held a degree in metallurgical engineering from the Colorado School of Mines (’65), worked in P&W’s materials development laboratory for 37 years until he retired.

He and his wife, Linda, moved into their present home in 2004 right after Hurricane Charley devastated the area.

This story was first published in the Charlotte Sun newspaper, Port Charlotte, Florida on Thursday, June 3, 2010 and is republished with permission.

He was born in Denver, CO on October 13, 1942 to Gerald Henry and Dorothy (Snow) Quick. “Gordy” will be remembered as a wonderful husband, father, grandfather, uncle, brother and friend to many.

After graduating from the Colorado School of Mines (CSM), Golden, CO in 1965 with a degree in Metallurgy, he served in the U.S. Army as a combat engineer officer in Vietnam. He attended one semester at the University of Kansas after returning from Vietnam but left due to war protests on campus.

Gordy always said he was proud to be an American and to have served his country. Subsequently, he worked at Pratt & Whitney, East Hartford, CT as a Metallurgical Engineer for 37 years.

He and his wife Linda lived in South Windsor, CT before retiring to Punta Gorda in 2004 where Gordy served as a director of the Burnt Store Lakes Property Owners Association from 2009-2012. He also served on the golf handicap committee of the Burnt Store Golf and Activity Club where he enjoyed much of his retirement golfing with good friends in the Over-the-Hill Gang golf league.

He is survived by his loving wife Linda of 42 years, their son David (Samantha) Quick; grandsons, Gregory and Geoffrey Quick of Bellevue, WA. He is also survived by his sister Dorothy “Gerrie” Swart of Brighton, CO; brother-and sister-in-law, Michael and Joyce Jylkka of Punta Gorda, FL and many nieces and nephews. He was predeceased by his parents.

A Memorial Service will be held on Saturday September 8, 2012 at 10:00 AM at the Kays-Ponger & Uselton Funeral Home, 635 E. Marion Ave, Punta Gorda, FL 33950. In lieu of flowers, donations may be made to Tidewell Hospice, 1144 Veronica Street, Port Charlotte, FL 33952 or to the Burnt Store Golf and Activity Club (BSGAC), 24315 Vincent Avenue, Punta Gorda, FL 33955. Inurnment will be at Sarasota National Cemetery, Sarasota, Florida at a later date.