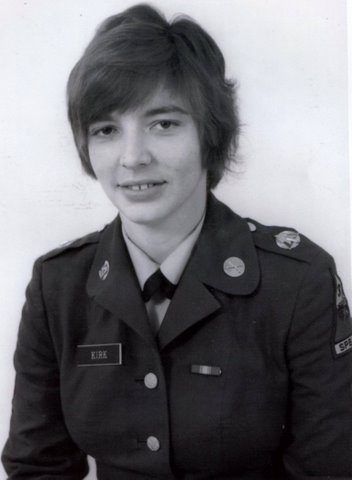 Ruth Russell is pictured in her 20s while serving as a sergeant in Germany in the late 1970s with the 3rd Armored Division Artillery.

When Ruth Russell of Charlotte Ratchets, south of Punta Gorda, joined the Army in 1973 it was still known as the Women’s Army Corps. In short, the WACs.

“Basic training for women was a little different back then. We didn’t shoot rifles on the rifle range or throw hand grenades,” she said. “We were women first and soldiers second. We weren’t allowed to smoke cigarettes while walking down the street.”

Not only that, but the lady soldiers were required to take etiquette courses in the service. Women in the military were usually file clerks, secretaries or on a medical staff.

“After training at Signal School in Fort Gordon, Ga. I was designated a Teletype operator with Morris Code capabilities. We sent Teletype messages and we could send and receive Morris Code,” she said.

“I went to the 23rd Engineering Battalion in Henau, Germany. When I handed the company clerk my orders he said, ‘Excuse me honey, you can’t be here this is a front line unit.’

“Because I was a female and this was a combat unit I was not suppose to be there. This was one of the first experiences where the Army had to deal with women in combat. There were no other women in the battalion and that made it very interesting,” she said.

“The only restroom facilities they had in the battalion were for men. Cardboard signs were put on the rest room doors that could be flipped. One side said men and the other side said women. The guys liked to play games with the sign,” Russell laughed.

After six months working for the 23rd Engineering Battalion her superiors decided to reassign to the 3rd Armored Division right across the street from where she had been working.

This was Russell’s Geneva Convention Card that all American military personnel had to carry when overseas.

“They didn’t know what to do with me either, so they made me their Race Relations and Equal Opportunity Director,” she said. “Twice a week I became the instructor on race relations and equal opportunity training that all the soldiers had to take.”

For 2 ½ years she served in this capacity in the 3rd Armored.

Race relations in the Army were lousy in the mid-70s. There was rioting in the ghettos throughout the U.S. in 1974-75.

“In the midst of all this I got married to a soldier I had met back in the States. Both of us were serving in Germany doing similar jobs on the same base,” Russell said. “I became one of the first women in the Army to have a baby and stay in the service. We lived off base over there.”

When Jasmine, their daughter arrived, Russell had to find the wife of another serviceman who would agree to look after her daughter on a moment’s notice 24-7 if duty called.

“I paid her $100 a month to take care of my Jasmine. That was a lot of money because I was only making $389 a month,” she explained. “I wanted to be a soldier and a mother. The whole thing worked well.”

About the time her first three-year tour was finished in 1976, Russell re-upped for a second four-year tour about the time she left Germany. She was reassigned to medics’ school at Fort Sam Huston, Texas where she was retrained for six months.

“I was sent to the Army hospital at West Point, N.Y. Only the best of the best got to take care of the West Point cadets,” she said. “We also took care of some of the soldiers retiring from Vietnam with missing limbs.”

Russell wasn’t at the Point long when she was assigned to the Army’s Allergy and Immunization School at Walter Reed Medical Center in Washington, D.C. She completed the training in 16 weeks.

“When I returned to West Point I became the NCO (Non-Commissioned Officer) in charge of the allergy and immunization clinic there,” she said. “I gave all the shots to cadets and dependent children at the Point as well as many of the staff members. I got an Army Commendation Medal for giving over 500,000 shots.”

“I had one interesting experience with Gen. Andrew Jackson Goodpasture, the commandant of West Point at the time. He was going overseas and he needed his shot record updated,” Russell said.

She told him he should show up at her office and she would take care of the matter.

“A couple of days later the head nurse at the hospital advised me, ‘You cannot tell the general he has to come to your office.’ 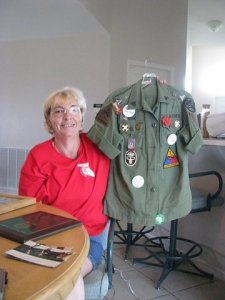 Former Army Sgt. Ruth Russell of Punta Gorda holds a shirt she wears to conventions adorned with military patches and other paraphernalia from her past service connections. Sun photo by Don Moore

“’That’s what the regulations say,’ I explained. “He sent the regulations to the general. A few days later Goodpasture sent a car and driver to Russell’s office. I was driven to his office to give him his shots.

“After we finished, the general said to me, ‘Not many sergeants would have the gumption not to fail to fill out a general’s paper work.’

“That’s why you work at West Point,” he responded. Then he saluted me.”

By 1980 Russell had moved on from the U.S. Military Academy. She had been reassigned to the 196 Aviation Battalion at Fort Bragg, N.C. as the unit’s allergy and immunization technician.

Her second hitch was up. Russell had decided to quit the Army because of the attitude of many of her male counterparts.

“The hassle with the men was a continuous everyday thing. It was totally unnecessary, but it wasn’t going to change,” she said. “Despite the conflict with some of my male associates, joining the Army was one of the best things I ever did. I got to travel, get an education and learn things I never would have learned anywhere else.”

In civilian life she has been active in military affairs since her discharge 30 years ago.

“I became involved with the Vietnam Veterans of America Association, helped build the Vietnam Wall in Washington, took part in the largest women veterans march– where 36,000 women vets marched in D.C. in 1980– I think,” she said. “Since I came here I’ve gotten involved with American Legion Post 103 in Punta Gorda. I became the post’s historian and wrote a history book about the post that won a state award from the Legion.”

When her mother moved to Punta Gorda a few years ago, Russell came down to visit. Her mom developed a serious illness and she took care of her until her death several years ago. She’s been here ever since and has no plans to leave the area.

This story was first printed in the Charlotte Sun newspaper, Port Charlotte, Florida on Monday, August, 16, 2010 and is republished with permission.