George Speidell of Port Charlotte looks at a picture of his grandfather who served in the U.S. Navy from 1900 to 1904. He is a guide and a member of the board of directors of the Military Heritage & Aviation Museum in Fisherman’s Village shopping center in Punta Gorda, Fla. where the picture is on exhibit. Sun photo by Don Moore

George Speidell was a “Snipe” aboard the USS Cushing, DD-797, during the Korean War. He worked as a throttle-man in the aft engine room on the Fletcher Class destroyer.

“I was 17 and a disenchanted junior in high school when I convinced my father and mother to let me joint the Navy in 1952,” the former 75-year-old Port Charlotte, Fla. sailor explained. “My grandfather and great-grandfather had been in the Navy and that’s where I wanted to be.”

Speidell went aboard the Cushing as a machinest’s mate. He loved it.

“In January 1953 we sailed for Korea. At 17 I was on my way to war,” the old salt said. “When we sailed into Pearl Harbor it was my first chance to view the superstructure of the Battleship Arizona. There was no memorial at that time on the Arizona.”

A few days later the Cushing accompanied a hospital ship on its way to the islands in route to Korea.

“The hospital ship took us to all the islands—Guam, Wake and Midway. The only time I was on ‘Dungaree Liberty’ the guys aboard ship played the people on shore in a baseball game while we waited for the hospital ship,” he said.

They eventually caught up with the 6th Fleet off the coast of Wansan Harbor, North Korea.

“My battle station was first loader on quad 40-millimeter antiaircraft guns. It was my job to shove a clip of shells in the 40-millimeter,” Speidell said. “I thought Korea was sub-tropical, but I found out above the 38th Parallel in the winter it could be 20 to 30 degrees below zero at sea on deck.”

On a couple of occasions the gunners aboard the Cushing chased North Korean MIG fighters away with their intense anti-aircraft fire.

“Every fourth shell in the clip was a tracer. The MIG pilots would see the tracers coming their way and they would generally turn tail and run,” he said.

One time he got to see some of the crew’s efforts to pull a pilot and the wreckage of his plane from the sea.

“The plane tried to land, but it was pretty shot up. It was then I learned how thin the skin of an airplane is. It’s like tinfoil,” Speidell said. “They brought a piece of the tail section aboard. Because I was a ‘Snipe’ in the belly of the ship I missed seeing the pilot come aboard our destroyer.”

More than 50 years later he admitted this was pretty heady stuff for a 17-year-old sailor during his first combat cruse.

“When we were close to shore we were always firing at something. The fleet was off Wansan, North Korea and we were sent into the enemy harbor. It was our job to level everything we saw on shore. The Cushing’s guns fired at enemy positions all day long,” Speidell said.

“One of the most interesting things to watch was the Battleship Missouri firing its broadside at night. When the Missouri fired all its main guns everything around the huge ship was lit up. You could see every ship in the sea that was close by,” he said.

“The scenario was that the Missouri would fire its 16-inch guns and the whole ship would rock. Then you’d here this loud boom. We could see the battleship’s shells flying over our heads. A few second later there was this tremendous blast when they hit the target. The Missouri shot shells 25 miles that were as heavy as a VW. They could put them in a man‘s pocket at that distance.”

He became the throttle-man aboard the Cushing because he was good at it. It was an important job aboard ship that took special talents that Speidell possessed.

“When you’re running at 20 knots along side an aircraft carrier talking on fuel maybe 50 feet apart, it’s very important the destroyer maintain a steady speed,” he said. “When the captain looks toward the ship’s fantail he wants to see a wake that’s going straight which means the ship is going straight.”

When the Korean War ended in July 1953, the Cushing and its sailors  made an around the world cruise to show the flag and bolster America’s image. It took almost a year and Speidell, who had turned 18 by then, became a tourist when he wasn’t aboard ship.

Their first port was at Subic Bay, Philippines. From there they went to Singapore.

“We were walking down the street in uniform in Singapore past this ornate building when suddenly this guy stepped out of a doorway and said, ‘Chaps do any of you know how to tie a slip knot?’

“He invited us into what we learned was the British Embassy. They were planning a ball and had a net full of balloons that were to drop down on the dancers, but nobody in the embassy knew how to tie the proper knot,” Speidell said “One of the guys climbed up on a ladder and tied a knot that worked.

“The Englishman offered us a drink at the embassy’s bar. We spent the rest of the afternoon there drinking free English liquor all because we knew how to tie a slip knot. I was 18 at the time and you know what happened to me,” he said with a grin.

The circumnavigation of the globe continued: We sailed through the Suez Canal to Port Siebe, where they were having a revolution, then on to Lebanon we sailed. From there we went to Turkey, where they threw a big celebration for us, and then to Algiers, Malta, Gibraltar, Italy, Spain and Greece.

They left in January 1954 and didn’t return until November to San Diego aboard the Cushing.

Since the destroyer was going to remain on the West Coast and Speidell had just gotten married and Audrey lived on the East Coast, he transferred to the Radar Pickett Ship USS Leary. His new ship was the eyes of the fleet.

After four years in the Navy, he decided to get out of the service and get some education. Speidell graduated from Brooklyn College’s electronics school. He got a job at Brookhaven National Laboratory on Long Island, N.Y. near where he grew up.

“They were under contract to the Atomic Energy Commission at the time. I spent the next 25 years working with four Nobel Laureates in high energy physics. I was in charge of the electronics shop they used,” he said. “They would accelerate protons in an elliptical orbit at the speed of light. Then they would hit a target with them. When they were hit with a beam of light they would break up. It was kind of like playing pool.”

After Speidell retired, he and Audrey bought a small RV camp ground on an island in the middle of the Susquehanna River in Pennsylvania they ran for 15 years until they sold it in 1999 and moved to Port Charlotte to retire for good.

Speidell tells his story about serving aboard a destroyer, USS Cushing, during the Korean War will one duty at the military museum. He started with the local museum before it opened its doors in the fall of 2001. Sun photo by Don Moore

He and the late Clyde Prior are the founders of the Military Heritage & Aviation Museum at Fisherman’s Village shopping center in Punta Gorda.

“I started out painting the museum’s first space in this shopping center all by myself in the fall of 2001,” he recalled. “When they had their grand opening on Dec. 7 I became a guide and shortly after that I was appointed to the board of directors. I fell in love with this job.” 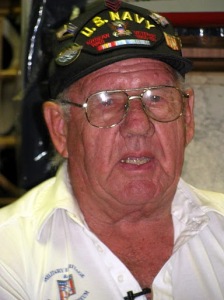 This story was first printed in the Charlotte Sun newspaper, Port Charlotte, Florida on Friday, August 20, 2010. It is republished with permission.