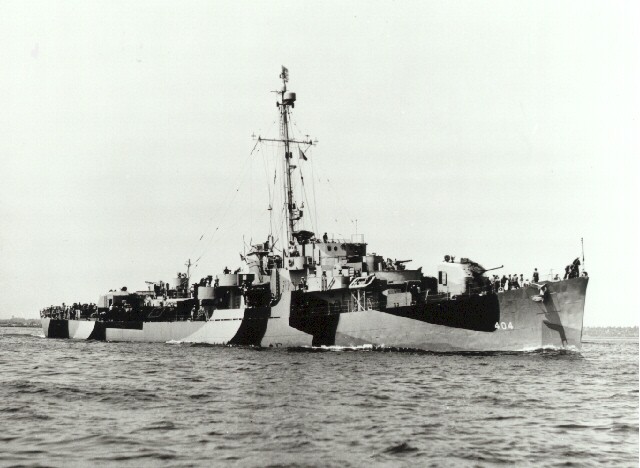 This is the USS Eversole, a destroyer escort, Boatswain’s Mate Diamond Trifilo in Sable Trace, North Port, Fla. served on during World War II. She was sunk at the Battle of Leyte Gulf, the largest sea battle in the war. Photo provided

When Boatswain’s Mate 2nd Class Diamond Trifilo went over the side of the USS Eversole, a destroyer escort, after she was struck by two Japanese torpedoes during the Battle of Leyte in World War II he was wearing nothing but his boatswain’s whistle on a chain around his neck.

The engagement in the Philippines was the largest sea battle of the Second World War. The three-day fight, Oct. 23-26, 1944, doomed the Japanese fleet and ended the emperor’s naval and air superiority in the Pacific.

What Trifilo was much aware of was the enemy still had lots of fight left in him when a pair of torpedoes severed the stern of the Eversole.

“It was 2:30 a.m. when our sonar man picked up the sound of what he thought was a Japanese submarine,” Trifilo said. “The captain thought it was an echo from a school of fish.

“A few seconds later a couple of torpedoes hit amidship. We were in Leyte Gulf all alone, even though we were suppose to be rendezvousing with Adm. Halsey’s Task Force 58. We hadn’t found the task force when we got hit,” he said.

“I was standing watch on the bridge and there was a —BOOM! BOOM! In an instant the ship’s fantail was gone and anyone on it never made it. Half our ship was gone.

“The Eversole sank so fast we didn’t have time to send a distress call. Our whale boats weren’t lowered into the water either because we sank so quickly,” the 94-year-old former sailor said. “A number of my ribs were cracked when I was thrown against the bulkhead when the torpedoes exploded upon contact with our ship. I jumped into the sea with nothing on.

“There were 150 guys who were screaming and yelling because of their injuries – floating around in water covered with thick, black fuel oil. It was enough to make you sick, all the oil and the wounded around you,” Trifilo explained.

“I was one of the last sailors off the ship. I walked off the deck into the sea because our ship was that low in the water,” he said. “Before I left the Eversole I helped cut loose one of two boarding nets hanging along the side of our DE. We tied the two nets (that were buoyant in the water) together and used them as a place to put the injured guys.

“With most of our wounded guys were on the net, the rest of the ship’s crew hung on around the edges of the net. Other guys who were behind the guys handing onto the edge of the nets hung onto to them.

“The submarine that torpedoed us surfaced. When it did it machine-gunned the surviving sailors and killed a bunch more,” Trifilo said. “Then it disappeared again. Before it went away for the last time, it left some floating mines that killed some more of our sailors who touched them and they exploded.”

At 9  the next morning they could see another ship on the horizon, but it never came close. A while later our sister ship, the USS Bull, showed up, surveyed the situation and left to find another vessel to help with the pick up; The Bull returned with the USS Whitehead, another destroyer escort.

“The Bull took us aboard while the Whitehead circled the rescue area protecting us from enemy submarines. Once aboard the Bull headed for a hospital ship where nurses were waiting to tend to our medical needs,” he said. “They cleaned the oil off us and gave those who needed it a shot of morphine. I got a red cross on my forehead because I got the morphine.

Diamond Trifilo looks at a picture of his mother, father and his seven brothers. Five of his brothers served in the navy in World War II and two more were in the navy in the Korean War. Sun Photo by Don Moore

“The guys that could walk, like me, they shipped out to a hospital. I sailed on a transport ship to a hospital in Treasure Island, Calif. When we got there each sailor was given a sea bag of clothes. We dressed up and they pinned Purple Heart medals on each one of us,” Trifilo said.

“From there I was flown by airliner from California to Chelsea Naval Hospital in Boston, about 60 miles from where I was born and grew up.,” he said. “After I recovered they told me I had two choices – I had enough points to get out of the Navy or I could stay in and they’d give me light duty. I chose to get out.

Trifilo returned to South Barre, Mass. where he grew up and went into the grocery store business with two of his seven brothers. They ended up with a chain of seven supermarkets that he was involved in until he sold out and got in the race horse business.

“How I got in the racing business, this bookie in town went broke. I gave him some money and he said, ‘Why don’t you buy a couple of my horses? It would be a great hobby for you and you could make some money.’”

That sounded like an interesting idea to Trifilo. He decided to sell his interest in the grocery store chain and invest his time and money racing horses all around the country.

“We had a lot of fun in the horse business. I hired a trainer and bought a farm near South Barre for my horses. My wife, Mary, and I spent a month each year in Florida or Louisiana racing horses at the track in Miami or New Orleans.

“When Mary died in 1986 I sold my horses and retired,” he said. “I never made any money with my horses, but I had a good time.”

For the past 25 years Trifilo has been coming to North Port for half a year. He’ll head back home to South Barre, Mass come May.

This story was first published in the Charlotte Sun newspaper, Port Charlotte, Florida on Monday, April 26, 2010 and is republished with permission.

Diamond was born in South Barre, MA, the son of Mariano and Elvira (Elvi) Trifilo. He leaves his only child Mary and her husband John Allen; his grandchildren, Gianna, Alicia, Johannah and John Jr.; brothers, Alvino, Arnold and Raymond; many nieces, nephews and godchildren. He was predeceased by his sisters, Josephine and North America; brothers Cleveland, Joseph, Matthew, Cleveland J. (Muzzy) and Tindaro.

Diamond was a US Navy veteran earning the Purple Heart during his service in World War II and was a life member of the American Legion, Veterans of Foreign Wars and Disabled American Veterans. He founded and operated Trifilo’s Markets for many years. He was an avid thoroughbred Horse racing enthusiast and Boston Red Sox fan.