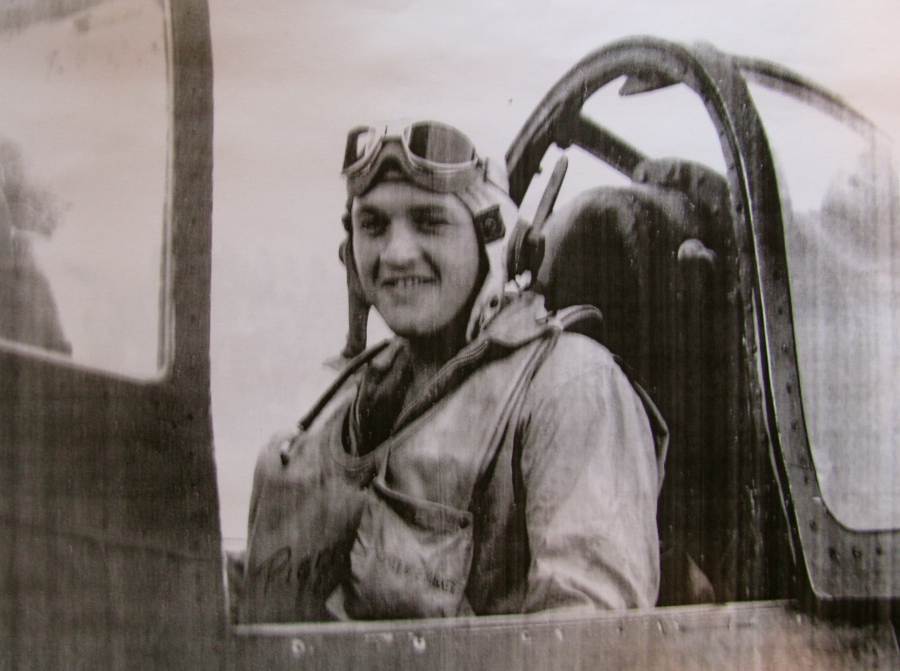 This was 2nd Lt. Jack LeBoeuf in the cockpit of his Corsair fighter shortly after he received his gold wings as a Marine aviator in World War II. Photo provided

This was 2nd Lt. Jack LeBoeuf in the cockpit of his Corsair fighter shortly after he received his gold wings as a Marine aviator in World War II. Photo provided

It was Feb. 22, 1945 and 2nd Lt. Jack LeBoeuf was flying his Corsair fighter from the deck of the carrier USS Essex as a member of Marine Fighter Squadron 213. Destination, Tokyo!

“We were sent on the Tokyo mission to protect our TBMs torpedo bombers (Douglas TBM Devastators),” the 83-year-old Port Charlotte, Fla. Marine recalled. “The TBMs were flying low and we were flying above them to make sure nobody bothered them as they hit their targets in Tokyo.”

It was a thankless mission because the TBMs flew low and slow when they attacked. They were sitting ducks for the anti-aircraft fire and enemy fighter planes. As a consequence, the much faster and better armed Marine Corsairs had to drop down to 1,500 to 2,000 feet above the deck during the attack to protect the torpedo bombers.

It was a two-day effort by the TBMs to destroy selected targets in the enemy capital. LeBoeuf and his fighter plane had almost survived the second bombing run over Tokyo when shrapnel struck his plane and he nearly bought the farm.

“My plane got hit by shrapnel. Right away, the whole cockpit filled up with smoke. In my confusion I rammed the throttle forward too fast to get the hell out of there. When I did, my engine choked and nothing happened. That was one of the scariest moments of my life. I felt like, this is the end of ole Jack,” he said.

“I eased the throttle back and pushed it forward once more. The engine coughed and started. I pulled out of there. About that time, I looked in my rearview mirror and saw that my face was full of blood. I had flown quite a ways farther toward the Essex when I realized my shoulder was bothering me. I had been hit by shrapnel there, too.

“I pulled up along side my wingman on the way back to the carrier. The expression on his face was something when he saw my whole head was full of blood. Since my radio was out, I couldn’t communicate with him or the carrier, so he flew back beside me all the way.

“‘Wounded pilot coming aboard,’ he radioed the Essex shortly before I landed. Everyone was on deck watching me land my Corsair. When I put her down, people climbed all over my plane and carried me out on a stretcher. I kept yelling, ‘I’m OK, I’m OK.'” 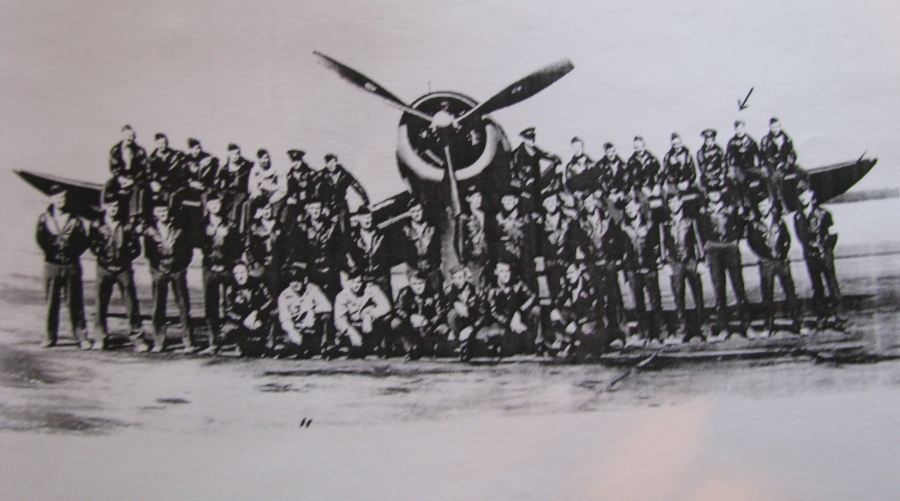 They called themselves the “Hell Hawks,” Marine Fighter Squadron 213 half of which served aboard the carrier USS Essex during World War II in the Pacific. LeBoeuf is the pilot seated on the wing of the Corsair second from the left. Photo provided

Recalling the incident almost six decades later, LeBoeuf said he really wasn’t hurt bad. He had a minor flesh wound on his face and some shrapnel in one shoulder. He was patched up and was ready to fly the next day.

In addition to the Purple Heart he received for his wounds, the young Marine Corps pilot also received two Air Medals and a Presidential Unit Citation as a member of the Essex crew.

The citation with his first Air Medal notes:

“For meritorious achievement in an aerial fight as a pilot of a fighter plane in Marine Fighter Squadron 213 attached to the USS Essex in action against enemy Japanese forces in the Saigon area of French Indochina on 12 Jan. 1945. Participating in fighter sweeps, Lt. LeBoeuf made repeated strafing runs through heavy anti-aircraft fire against ground aircraft destroying two planes and scored direct hits on several others. His airmanship, courage and devotion to duty was in the highest traditions of the United States Naval Air Service.”

LeBoeuf grew up in the upper peninsula of Michigan. He joined the Navy in 1939 after graduating form high school. For the next two years, he was assigned to the cruiser USS Philadelphia where he became a petty officer before he was 21 and the Japanese attacked Pearl Harbor.

In August 1942 the Navy selected 100 enlisted men from the ranks for flight training. He applied, and was one of the very few chosen for the program. 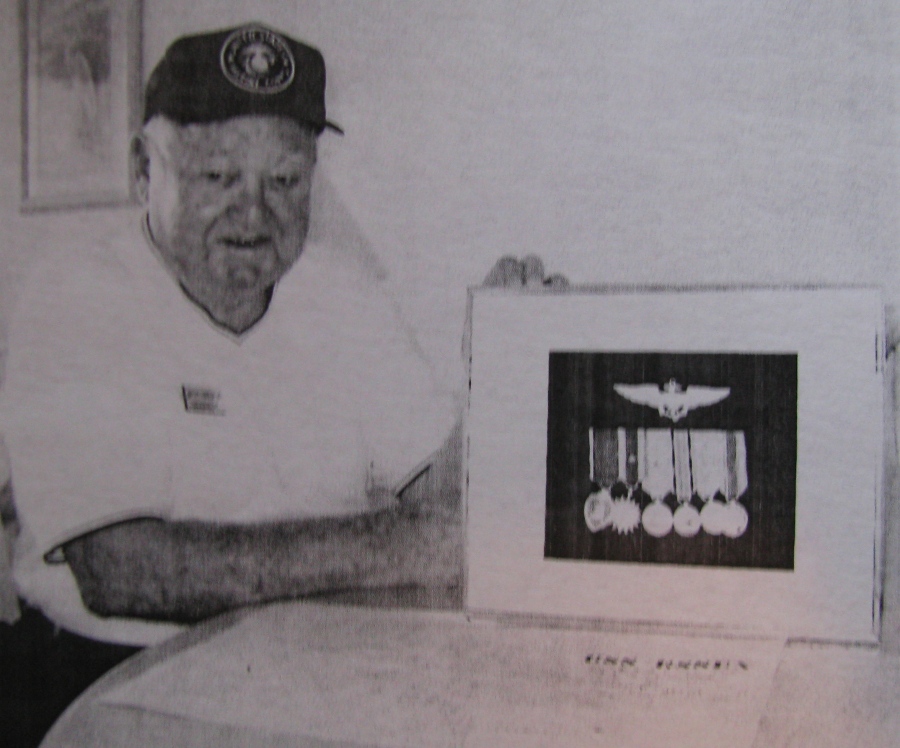 LeBoefu holds a framed picture of his medals which includes the Purple Heart, two Air Medals, a Presidential Unit Citation and three Battle Stars for taking part in the battles of Iwo Jima, Okinawa and Tokyo. Sun photo by Don Moore

“I was transferred to primary flight school at the Naval Air Station at Olathe, Kan.,” he said. “I had a hard time learning how to taxi an aircraft because I had never driven a car. I logged over 400 hours of flight time before I learned to drive.”

In November 1943 he became a member of VMF-213. In December of that year, half of his unit was sent aboard the Essex. By January 1945, they were in the thick of it in the Pacific.

On Dec. 12, 2004, Maj. Jack LeBoeuf completed 65 years as an active member of the Marines, regular Navy and the Naval Reserve. He has no intention of getting out of the service at this late date.

This story was first published in the Charlotte Sun newspaper, Port Charlotte, Fla. on Monday, Jan. 17, 2005 and is republished with permission.