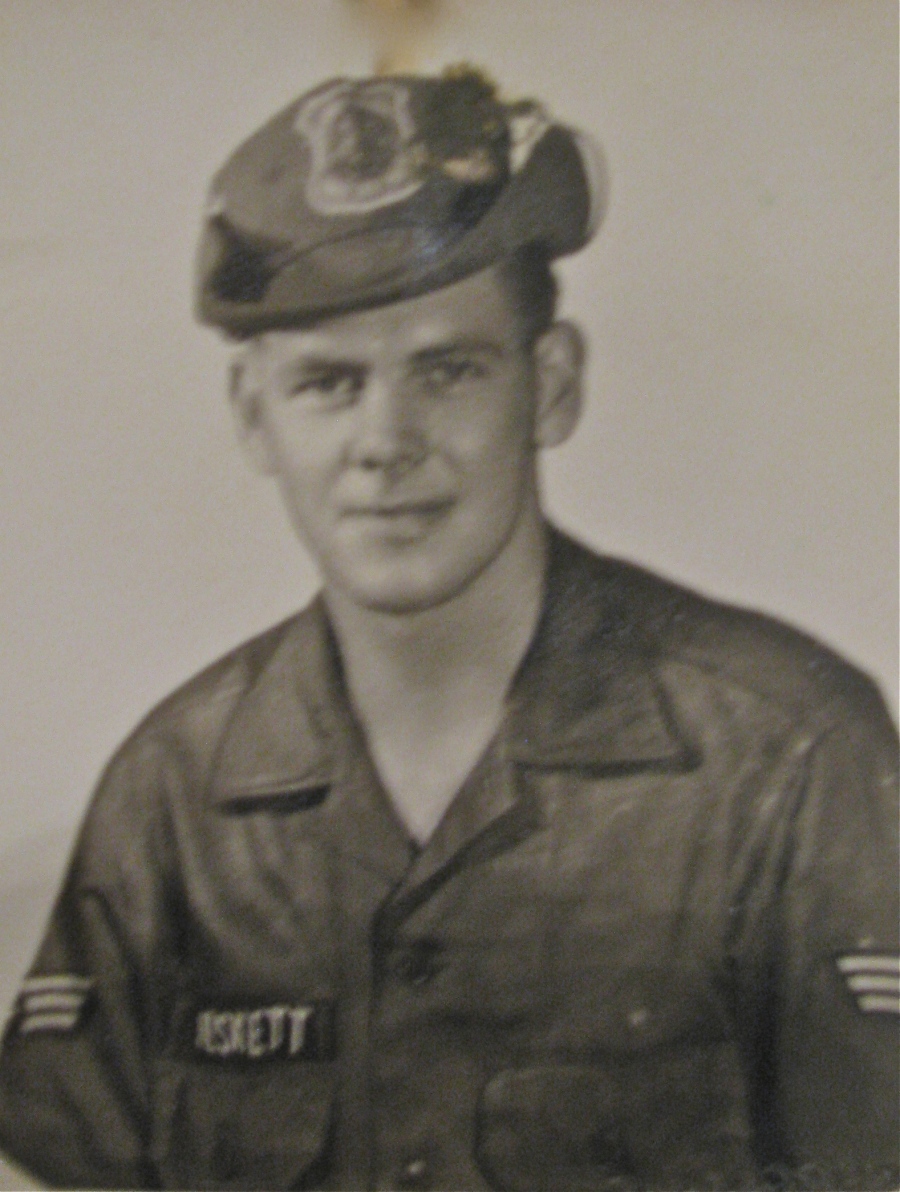 Jim Heskett of Punta Gorda is pictured as a new Air Force recruit about the time he got out of boot camp at Lackland Air Force Base in San Antonio, Texas. It was 1958 and he was 17. Photo provided

Jim Heskett got his mother to sign him into the Air Force in 1958 when he was 17. It was the start of a military career that lasted more than two decades and took him across the country and around the world performing a variety of jobs for Uncle Sam.

He took basic at Lackland Air Force Base, near San Antonio, Texas. Then Heskett was trained at Eglin Air Force Base in the Florida panhandle as a crash-rescue specialist. When Air Force planes crashed it was his unit that raced in to pull downed pilots and crew members from the twisted, fiery wreckage.

Korea was his first destination after qualifying as a crash-rescue guy. He was based in Osan in 1960 to begin with.

“The first crash I was involved in, a couple of C-47 pilots didn’t make it very far off the runway when they experienced some kind of problem. They turned the plane around to return to base, but crashed before they reached the runway,” the 72-year-old former Punta Gorda sergeant explained.

“Both the pilot and co-pilot were killed in the crash when they hit nose first and their plane then caught fire. When we reached what was left of the airplane in the rice paddies at the end of the runway it was engulfed in flames. We put out the fire with foam.”

From Osan Haskett was reassigned to Pang Yang Gu. It is an island off the west coast of Korea in the Sea of Japan near the 38th Parallel dividing the North from the South.

“There were no airfields there. We landed our C-47 and C-46s loaded with military equipment on the beach,” he said. “There was a 25-foot fall in the tide on the island so it was tricky landing up there.

“By then I was an Airman 2nd Class and had been appointed crew chief. I came back to the States and was assigned to MacDill Air Force Base in Tampa. It was a SAC (Strategic Air Command) base.

“At MacDill we rescued F-86 “Sabre” jet fighter pilots who crashed. This was during the “Cuban Missile Crisis” of 1962. When they were taking off sometimes they would lose their tailpipes and when they did they lost their thrust and crashed.

“One of these guys crashed his jet into Tampa Bay about 400 feet off shore. When we got to the end of the runway with our truck we took a life raft and swam out and rescued him. By this time he was floating around out of his airplane in the bay.

“About the time we put him in the life raft a rescue helicopter arrived and the prop wash from the chopper turned our life raft over. We waved the copter off and swam him back in the raft. He suffered minor back injuries and stayed in the hospital about a week. 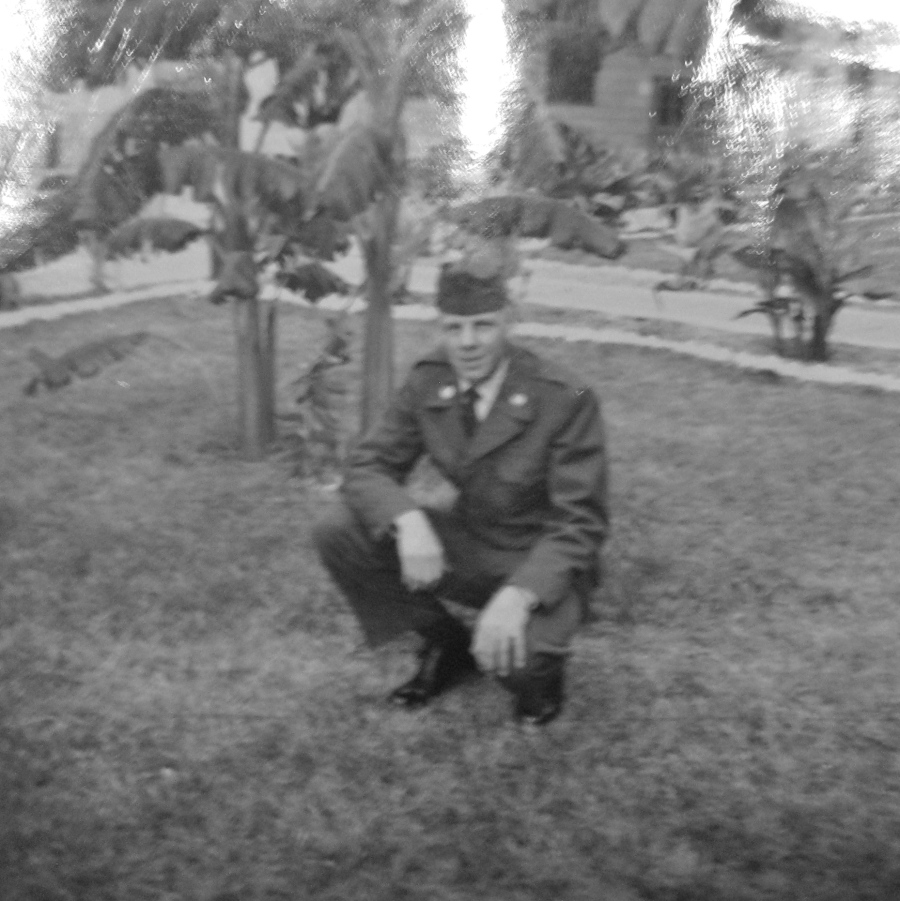 Heskett was 22 and working with a crash-rescue team at MacDill Air Force Base in Tampa in 1963. Photo provided

“Another F-86 pilot lost his tailpipe about halfway down the runway. He had just barely gotten his wheel up when he crashed. His wing tanks exploded and caused a whirl wind of flames on his wing tips as he skidded down the runway,” Heskett recalled.

“Before the plane ever stopped the pilot had his cockpit opened and was throwing his stuff off. While standing on the wing he dropped his helmet and flight vest,” he said. “I was chasing him with my truck, but the plane was going 90 mph and I couldn’t catch up to him.”

The pilot survived with only minor injuries.

During the eight months Heskett was at MacDill he was cross-trained as an aviation electrician.

One of the planes he worked on was Gen. Curtis LeMay’s personal KC-135. The general was commander of SAC at the time.

“I worked on rewiring the plane’s water system. We took it for a test flight and flew it from Nebraska down around Texas and back up to Nebraska to check it out before giving it back to Gen. LeMay.

“While still at MacDill I got a telegram to redeploy to Vietnam. Then I was ordered to Okinawa by way of another telegram,” he said. “When I reached Okinawa they wanted to know where my orders were. They wouldn’t send me into combat in Vietnam without orders. I wound up in Thailand for a year fixing KC-135s and refueling airplanes.

“In 1973 I was retrained as a physical therapist. When I finished my training I was assigned to Laughlin Air Fore Base in Del Rio, Texas. I was the only therapist on the base,” Heskett said.

“By then I was a tech sergeant taking care of accident victims. I recall one case I had. The guy had been in a wheelchair 18 months before I got him. I had him walking in six months,” he said with satisfaction.

In 1979 Heskett retired from the Air Force after 21 years. For several years he lived in Sand Springs, Texas. He worked in the oil fields running heavy equipment until he moved to St. Petersburg to live with his grandfather.

For 14 years he worked at the St. Petersburg post offices as a maintenance man. The next couple of years Heskett worked with a car stunt show that appeared in state fairs around the north eastern U.S.

There is acreage and a barn-like house on Bermont Road a few miles east of Punta Gorda. Haskett has three grown children: Michelle, Donald and Edie.

This story was first published in the Charlotte Sun newspaper, Port Charlotte, Fla. on Wednesday, May 16, 2012 and is republished with permission.

Click here to view Heskett’s collection in the Library of Congress.