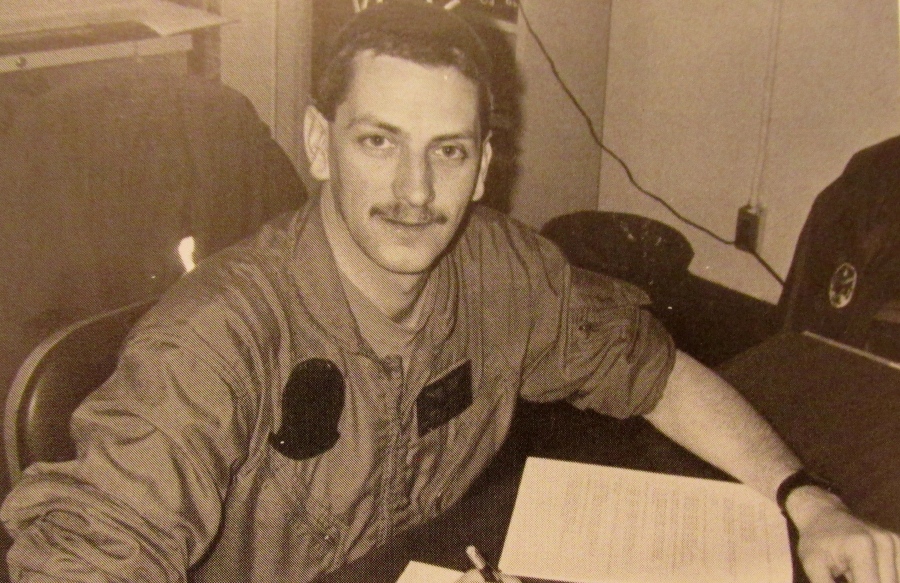 Jim Walker is pictured taking a Navy test in a squadron book of his unit while serving in Adak, Alaska. Photo provided

Jim Walker of Englewood, Fla. spent most of his 22 years of service in the U.S. Navy as a flight engineer on a P-3 four-engine reconnaissance plane searching for Soviet submarines or monitoring electronic signals from enemy missiles while flying in international waters just off the coast of aggressor countries.

The retired Navy chief loved his job keeping the airplane flying if trouble developed while the crew was in the air thousands of miles away from base. Today he works as a State Farm representative at an office in Englewood.

Walker said after high school he went to work in New York’s financial district. After a year or so working there he told his boss he thought he would like to find something else to do in the way of a lifetime job. His boss suggested the Navy. He went down, signed up and the rest is history.

After basic at Great Lakes he attended Aviation Structural Mechanics School in Memphis, Tenn. and then it was on to a P-3 school in California where he learned how to maintain the four-engine plane’s air conditioning system.

His first duty station was Clark Air Force Base in the Philippines. He joined a P-3 squadron there. Mostly they flew anti-submarine warfare patrol looking for Soviet subs and ships. It was in 1983, the height of the “Cold War.”

While in the Philippines Walker decided he wanted to do something more exciting than be part of a P-3s ground crew responsible for keeping the airplane’s air conditioner operational. He decided to become an aviation flight engineer. Trouble was he had to have an E-5 rating and he was an E-4.

He toughed it out for a few more months, earned the next rank up, took the test for flight engineer and passed with flying colors. He attended flight school in Pensacola and went on to flight engineering school at Moffett Field in California.

Walker’s first duty station as a flight engineer was Squadron VP-17 stationed at Adak, Alaska in the Aleutian chain of islands. They spent most of their time checking out the Russians subs sailing from the Soviet Union’s mainland base across the Bering Sea.

“When in Alaska they sent us to the North Pole to fly circles around the pole. We were on station a couple of hours when we were told there was going to be a surprise,” he recalled more than three decades later. “As we flew in circles over the pole two submarines popped through the ice. “An American and a British sub broke the ice nose-to-nose. It was a pretty interesting mission. Our duty was to shoot pictures of the two subs after they broke through the ice at the pole.”

This is the shoulder patch Jim Walker wore while serving as a flight engineer on a P-3 Navy patrol plane during one of his overseas tours. Sun photo by Don Moore

“On another mission we flew out of Tule, Greenland working with scientists checking out SONAR buoys. We were in radio contact with the scientists and were told to drop the buoys with thermite grenades attached as close to them as we could. The idea was the buoys would hit the frozen ice and the attached grenade would burn a hole down to the sea water.

“Problem was flying at 150 knots at an altitude of 200 feet we almost hit the scientists with the buoys. If we had, the four-foot long, 40-pound buoys could have done some serious damage. We saw the scientists scatter as the buoys hit the ice close by.”

Walker’s next dusty station was Guam. There he flew as a flight engineer abroad an EP-3 surveillance aircraft. it was the same plane but the only difference instead of searching for Soviet subs they were flying electronic surveillance missions.

“We flew missions off the coast of North Korea. Our EP-3 flew along the coast in international waters and recorded anything and everything North Korea was sending electronically,” he explained. “I can’t talk about what exactly we did on these missions. I can say we were listening and we had optics on the airplane that allowed us to look far into the country.”

Possibly the most exciting mission he ever flew on had nothing to do the the Soviets and international warfare. It was a trip two local fishermen took. They went fishing in a little boat with a outboard motor. Their outboard quit and the tide was taking then off shore, Walker said. “Another search crew spotted the missing fishermen the day before, but it was getting dark. We were sent out the next day to find them again.

“The first search crew dropped the stranded fishermen a signal mirror. That’s what saved them,” he said. “Our copilot caught a glimpse of a flash from the signal mirror out the corner of his eye. Our plane circled the fishermen until nearby boats, who were also in the search, arrived and rescued them. Because of the outgoing tide they weren’t coming back if we hadn’t found them.”

Another flight Walker took during the time he was in Guam almost became a disaster.

“We were flying off Wake Island in the midst of Gooney Bird nesting season when we got in trouble,” he recalled. “Gooney Birds were about the size of turkeys and thousands of the big birds nested on the island once a year.

“Every time we’d fly off on a mission a truck would have to precede us down the runway to chase the Goony Birds off the concrete. We were just taking off and I was handling the throttles on this P-3. I looked out the window and saw this Gooney Bird coming at me. The bird hit the nose RADAR and the windshield and shattered it.

“We spent the next three hours circling the field dumping gasoline so we could make an emergency landing with our damaged airplane,” Walker said. “We sat on Midway for the next two weeks drinking beer and waiting for the windshield parts to be flown into us.”

After two decades of service in the Navy, most of it as a flight engineer, he finally made Navy Chief. It’s not an easy task. Walker took the test for chief 13 times and passed it 13 times, he said. It’s not just the test scores that count. Even if you pass it, then it becomes a matter of how many slots for chief does the Navy have open to fill.

“The last time I took the test there were 150 people who passed but only two Chief slots available,” he said. “I got one of the two vacancies.”

His last two years in the Navy were spent stateside on the beach. Walker retired and moved to the Englewood area in 2003. He has a daughter, Megan, who is also a Navy veteran. After four years of service aboard the carrier USS Nimitz she took the G.I. Bill and is currently attending college in Washington state.

This story was first published in the Charlotte Sun newspaper, Port Charlotte, Fla. on Monday, May 8, 2017 and is republished with permission.