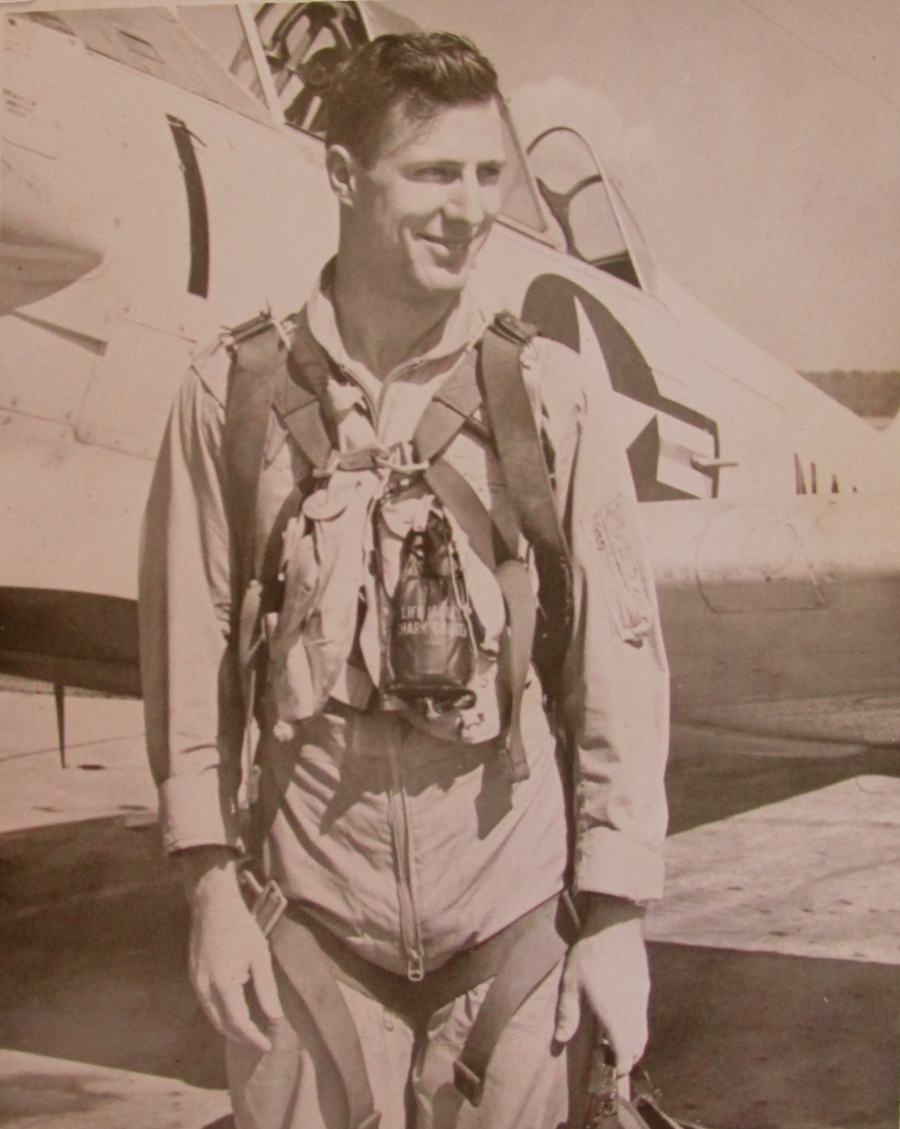 Bill Hahn of Punta Gorda Isles in flight gear while learning to fly at the Pensacola Naval Air Station in the early 1950s. In the background is an SNJ two-seat, propeller-driven trainer he and an instructor used. Photo provided

Bill Hahn of Punta Gorda, Fla. flew a P-2 “Neptune,” twin-engine Navy patrol plane for three years during the“Cold War” in the 1950s searching for Soviet submarines and communication ships off the Atlantic coast of the United States.

As a Naval Reservist he was called back into service during the “Cuban Missile Crisis” of 1962 when the Russians took nuclear missiles into Cuba. The Soviets created a missile crisis that focused the whole world’s attention on Cuba during 13 days in May of 1962.

After the Cuban crisis, Hahn took a job with Sikorsky Helicopter Corp. that captures one’s imagination. He was in charge of developing presidential helicopters from John F. Kennedy through George Herbert Walker Bush.

The February 1988 edition of “Rotor & Wing International” magazine had a story explaining the role Hahn and the chopper he helped build played in keeping the presidents safe. The headline for the article reads: “The U.S. President’s New Doomsday Helicopter.”

This was “Crew 8” of Navy Squadron 832 during the “Cuban Missile Crisis” in 1962 at Guantanamo, Cuba. Hahn is the tall guy in the back row, third from the left. Photo provided

In 1962, shortly before President John F. Kennedy was assassinated, Hahn joined the staff of the Sikorsky Aircraft Corp. as an engineer in the Stratford, Conn. main office. Two years later he was selected by the firm’s president to serve as Manager of the Sikorsky Presidential Helicopter Division.

It was thanks to Jackie Kennedy, the president’s wife, that he got the job. She discovered, while visiting their Cape Cod vacation home, the presidential luggage arrived hours before the president and his wife made it to Massachusetts because it went by helicopter.

“So the president’s people came to Sikorsky and asked if they could fix up a Navy helicopter for the Kennedys,” Hahn recalled. “Before it was over we built nine VH-3A presidential helicopters.”

Three or four years later Hahn and his staff were confronted with another big problem involving the presidential helicopter.

“I think it was during the Reagan Administration. The president wanted Sikorsky to build a helicopter that could withstand an atomic bomb blast,” he said. “An atomic bomb blast would send out waves of electricity that would adversely affect the aircraft’s controls.”

The end result was the Sikorsky VH-3D Presidential Helicopter that might be able to withstand an atomic bomb detonation. It was dubbed the “President’s Doomsday Helicopter.” This is the craft that would fly the first family to safety if nuclear war was declared.

“From the completion of that first helicopter it was my job to fly down to the White House and meet with the First Lady. I had to find out how she wanted the Presidential Helicopter decorated,” the 87-year-old former Sikorsky engineer said.

Mrs. Kennedy wanted the inside of the President’s Helicopter decorated in shades of blue. After her husband’s assassination when Lyndon John took his place brown was his color.

Hahn said, “President Johnson grew up on a farm in Texas with tan cattle and brown grass. He liked brown. So Ladybird Johnson decorated his helicopter in tans and browns. Then Nancy Reagan took over and she didn’t like brown. It was back to blue once more for the helicopter’s interior.

“Blue shag carpet with loops was popular when Reagan was president. Nancy wanted the carpet on the Presidential Aircraft to be made of blue shag loops.

“How do you tell the president’s wife no?

‘Mrs. Reagan,’ I said, ‘Most of the women who get on Air Force One wear high heels. They would catch their heels in the carpet loops,”

“She looked right at me and said, ‘You don’t know how much embarrassment you’ve saved me.’

Air Force One got blue carpet without the loops.

When President Richard Nixon took office Hahn had to cope with a whole set of problems involving the presidential helicopter.

Nixon got close to President Anwar Sadat, president of Egypt, who was vacillating between turning Egypt into a democratic country like the U.S. or putting it in the Russian sphere of influence and turning the county into a totalitarian state.

“Nixon decided to try and help Sadat make up his mind about the future of his country,” Hahn explained. “The U.S. president took his Egyptian counterpart on a flight in his VH-3D Presidential Helicopter. What impressed Sadat most was the aircraft’s air-conditioning system.”

Nixon had taken three of these bombproof Sikorsky helicopters with him on his Egyptian trip. He flew home with two fewer choppers. He had given two of the multimillion dollar helicopters to Sadat.

“When Nixon got back from his trip to Egypt, I got a call from the president of Sikorsky. He told me, ‘Bill, they need you in Egypt right away! They want to set up a helicopter maintenance and training program over there. They need to know how to handle a VH-3D Sikorsky Helicopter.

“I spent some time in Egypt setting up a helicopter program,” Hahn said. “But I couldn’t tell my family where I was going or what I was doing.”

Then there was the President Jerry Ford problem.

This is the shoulder patch of Patrol Squadron Ten he flew with during the early 1950s. They were based in Brunswick, Maine. Sun photo by Don Moore

“I got my staff working on President Ford’s issue. Problem was we quickly discovered there were all kinds of wires and cables running above the entrance-way to the helicopter, so the door couldn’t be expanded so the president could board easier. That’s what I had to explain to my boss.

“Then someone on my staff came up with a simple solution: Install a rubber bumper around the top of the helicopter door. That way if President Ford banged his head against the aircraft he would be hitting it against a rubber cushion instead of the aluminum side of the helicopter.

“But that caused another problem: How do you tell the President of the United States he’s a clumsy klutz? As a consequence we had to put a rubber bumper around the door of the chopper so he didn’t hurt himself getting aboard?

“You don’t. We did nothing and told Ford nothing,” Hahn said.

Hahn retired from Sikorsky in 1989 when he was 62. He and his first wife Jocelyn retired to Punta Gorda in 1992. They have three adult children: Sharon, Virginia and William who live out of state.

This story was first published in the Charlotte Sun newspaper, Port Charlotte, Fla. on Monday, June 5, 2017 and is republished with permission.

Click here to view Hahn’s collection in the Library of Congress.

William B. Hahn of Punta Gorda, Florida, and Bailey Island, Maine (formerly of Orange, Connecticut), passed away on March 11, 2018.

He was born Aug. 5, 1929, in Newark, New Jersey, and attended school in South Orange, New Jersey. After graduation from college he attended the US Naval Officer Candidate School where he was commissioned as Ensign and sent to Pensacola, Florida, for Navy flight training. He was awarded wings as a Navy pilot in 1954, served in the regular flight program until 1958, and continued in the Naval Reserve flight program until he retired with the rank of Captain.

He moved to Orange, Connecticut, in 1961, where he was employed by Sikorsky Aircraft and was manager of the newly formed Presidential Helicopter program.

While in Orange he was chairman of the school board for 10 years and Commodore of the Milford Yacht Club.

After three trips with his 39-foot sailboat from Maine to Key West he retired to Punta Gorda in 1990, where he served on the Punta Gorda Canal Maintenance Advisory Board and was Commodore of the Charlotte Harbor Yacht Club.

William is being cremated and burial will be at a later date.

Please visit kaysponger.com to leave the family your thoughts, memories and condolences on the online guestbook.