Pfc. Joseph Lukasek of Port Charlotte was 19-years-old when he became a cannoneer with an anti-aircraft artillery outfit attached to Gen. George Patton’s 3rd Army during the Second World War. Photo provided

Joe Lukasek of Port Charlotte, Fla. was a cannoneer in A-Company, 124th Anti-Aircraft Battalion attached to Gen. George Patton’s 3rd Army in Europe during World War II. His anti-aircraft unit shot down German V-1 “Buzz Bombs” during the spring of 1944 as they flew over the White Cliffs of Dover. Later in the war they were equally successful downing German fighter planes in France.

In 1925 Joe and 13 siblings arrived with their parents from Czechoslovakia at the immigration processing center on Ellis Island in New York Harbor. He was a year old at the time. Joe, his brothers and several of his sisters were placed in a Chicago orphanage. He never saw his folks again.

In 1941 at 18 while he was still in the orphanage he tried to join the Marines, like his older brother, but they wouldn’t take him because he wasn’t physically fit, they said. A few months later Joe was drafted by the Army. After boot camp in California Joe became a member of the 124th AAA Battalion.

“In the summer of 1944 we sailed for South Hampton, England. It took us 13 days and I was seasick all the way to Europe,” he recalled. “We went ashore and set up our gun on the Cliffs of Dover.

“When the German “Buzz-Bombs” few over we shot down many of them. One of those crashed behind where our gun was located. It blasted a hole in the ground you could fit a house in.

“Toward the end of that period the Germans started sending over eight V-1 rockets at a time. Some times we’d fire our guns all day and all night. We fired it so much we had to have the barrel changed because we burned it out,” Joe explained.

“We had some crazy Russian pilots who used the wings of their airplanes to try and turn the ‘Buzz Bombs’ around and head them back to France. That was something to see.

“When we got through at Dover we moved to Normandy. When we landed our equipment on the beach in France there were piles of American helmets stacked up. Some of the helmets had bullet holes in them,” Joe said. “There were also piles of M-1 rifles stacked up on the beach. They had been left behind by dead American soldiers. 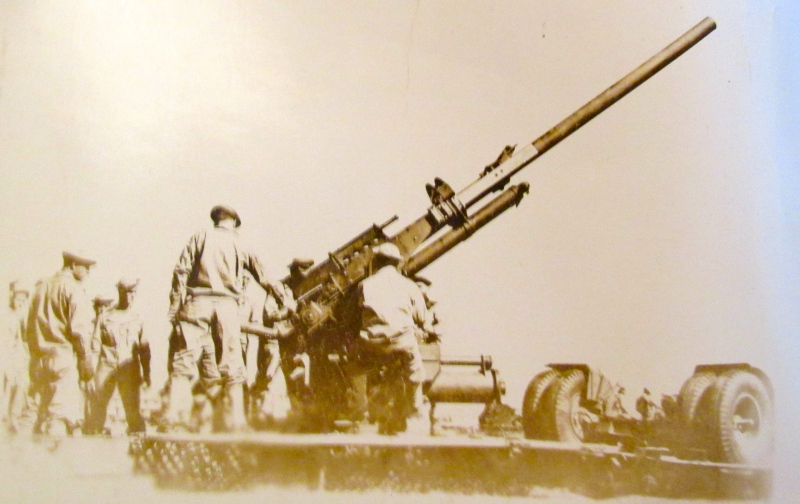 Lukas rammed the shells into a 90-millimeter gun like the one pictured during World War II. Photo provided

“We pulled our gun into the hedgerows and it bogged down in the mud. While fighting the mud between the rows of hedges we shot at a number of German planes that flew over. While we were there we must have shot down 15 or 20 enemy aircraft.

“We arrived with Gen. Patton after the Germans surrounded the Americans at ’The Battle of the Bulge’ in France just before Christmas 1944. We had been in Holland fighting the Germans and had to turn around and come back and fight them at ‘The Bulge.’

“We were surrounded by the enemy in the Ardennes Forest. We were out of food and short on ammunition. We were trying to keep warm in foxholes. We took straw from a barn and stuffed it in our pants to keep us warm. We couldn’t light a cigarette or have a fire. Some of our soldiers in the foxholes took their shoes off at night and their feet froze.

“Then shortly after Christmas the sky cleared and our P-47 ‘Thunderbolt’ fighters returned and attacked the German army. About the same time Patton broke through their lines and saved us. If he hadn’t I wouldn’t be here today.”

What happened to you after “The Battle of the Bulge?”

“We set up our anti-aircraft gun in Holland and I got sick. I couldn’t eat anything. They put me on a Red Cross train with all the wounded soldiers. I kinda felt out of place. I ended up in a Paris hospital. I was told to drink hot tea and eat crackers.

“I was sent back to my AAA unit about the time we crossed the Rhine River on a pontoon bridge near Remagen, France. At that point we were attached to the 101st Airborne Division. “

A short while later the Germans called it quits. Lukasek was still trying to recover from his intestinal problems. By then he was back in France playing cards with his buddies when the Americans dropped two Atomic bombs on Japan and a couple of days later World War II was over.

Joe still has one of his dog-tags from his Army service 75 years ago. Sun photo by Don Moore

But not for Joe. He became an MP and helped with the occupation in France.

“This was one of the roughest times in the Army for me. I was a little guy and had to handle these big, drunk G.I.s who wanted to party or fight,” he said. “Eventually I took a liberty ship out of Le Havre for the USA. Just before we arrived we hit a storm and we couldn’t go on deck because the ship was rolling so radically.”

From New York City Joe took a train to Camp Grant near Chicago where he was discharged from the Army.

It wasn’t too long after that he married Ruth. The couple continued to live in the Chicago area.

He went to work as a pattern maker in a cabinet shop where he spent the next dozen years. After that Joe went to work for Anchor Coupling in the engineering department. They made hydraulic couplings for heavy equipment. He stayed with them another 15 years. Finally he and Ruth moved to Port Charlotte in 1982 and he went to work in the maintenance department at St. Joseph’s Hospital for his last 10 years. The couple has three adopted children: Cindy, Patty and Joseph.

This story was first published in the Charlotte Sun newspaper, Port Charlotte, Fla. on Monday, April 10, 2017 and is republished with permission.