Spc.-5 Al Tracy spied for the U.S. in East Germany while in an American Army uniform during the “Cold War” in 1967 and ’68. This shoulder patch was what he wore on his uniform. Sun photo by Don Moore

Al Tracy of Nokomis was a spy working in East Germany in the ‘60s. He was a member of the U.S. Military Liaison Mission operating out of spy headquarters in 1966 located in a big house in Potsdam.

“After graduating from the University of Vermont in 1965 I was drafted into the Army,” the 73-year-old former soldier said.“ I ended up studying military intelligence which may or may not be an oxymoron.

“I became a military analyst with the U.S. Army in Berlin as part of the United States Military Liaison Mission. Our job was to spy on the Russians and report back to headquarters about the various kinds of military equipment they used.

“We spent much of our time analyzing data. Dressed in our American Army uniforms we had passes and could tour East Germany. We were effective on the ground espionage with our cameras, microphones and black boxes.

“The purpose of all these units was to make sure there were no surprise attacks from either side. It provided a conduit between the various military missions and their headquarters. If there was an issue to be resolved it was done quietly and nicely through the missions.”

One of the high points in Tracy’s outfit occurred four years before he arrived in the Berlin area. His unit oversaw the transfer of U-2 spy pilot Frances Garry Powers in 1962 for a couple of Soviet spies the U.S. were holding in prison. Powers was shot down in his spy plane while flying a not-so-secret mission over the Soviet Union in 1960.

He was marched across the Glienicke Bridge that separated Potsdam from West Berlin in ’62. At that point the two Russian spies were turned over to the East Germans at a momentary meeting in the center of the bridge. It was Tracy’s unit that handled the exchange for the Americans.

“Eventually after I arrived I was in charge of targeting the Soviet military units across East Germany. I was a Spc 5,” he said. “Our unit had 14 field-grade officers who were experts in Russian military equipment and spoke Russian, German or both. There were 28 enlisted men, including myself. Most of the enlisted people were college graduates.

“The most interesting time we had over there was in 1968. We discovered that 10 Russian military divisions had relocated from the Berlin area to the border with Czechoslovakia to help quell an uprising that was beginning to take place there,” he said. The Czechs wanted the Russians out of their country.

“Our report about the Russians relocating troops along the Czechoslovakian border was sent to the Commander in Chief of all U.S. Army Forces Europe. It also went to the Defense Intelligence Agency in Washington, D.C.

“The number of U.S. forces on the ground in Berlin didn’t amount to a hill of beans. We had an infantry battalion and a tank battalion. The Russians had 20 divisions of infantry and tanks,” he said.

Although the Russian intrusion into Czechoslovakia didn’t set well with the U.S. there wasn’t much this country could do about it short of launching a full scale war. Tracy said officials in Washington were more concerned about the Vietnam War that wasn’t going well for them.

This was an area where his unit scored some points with the higher-ups in Washington.

“The Soviets SAM-3 missile sites in Vietnam were raising hell with our F-4 “Phantom” jet fighters,” he noted. “ We were given black boxes that could capture radar signals from SAM-3 missiles which they did. We sent the information we captured to the U.S. Defense Intelligence Agency.

“It must have helped because our F-4 fighters became less vulnerable to Soviet missiles in Vietnam,” Tracy said.

Much of his time behind the “Iron Curtain,” in East Germany, was spent driving hopped-up Ford cars with a range of high-powered cameras looking for Russian military equipment to photograph on their intelligence beat across East Germany.

Before becoming a driver for the military Tracy took a defensive driving course that included a spin down the Autobahn in a Ford with a 450 hp, V-8 engine with a four speed shift on the floor.

“In third gear while driving on the Autobahn I got it to 140 mph. I never put it in fourth gear. That’s fast enough for me. I was told it could go 200 mph in fourth gear,” he said. 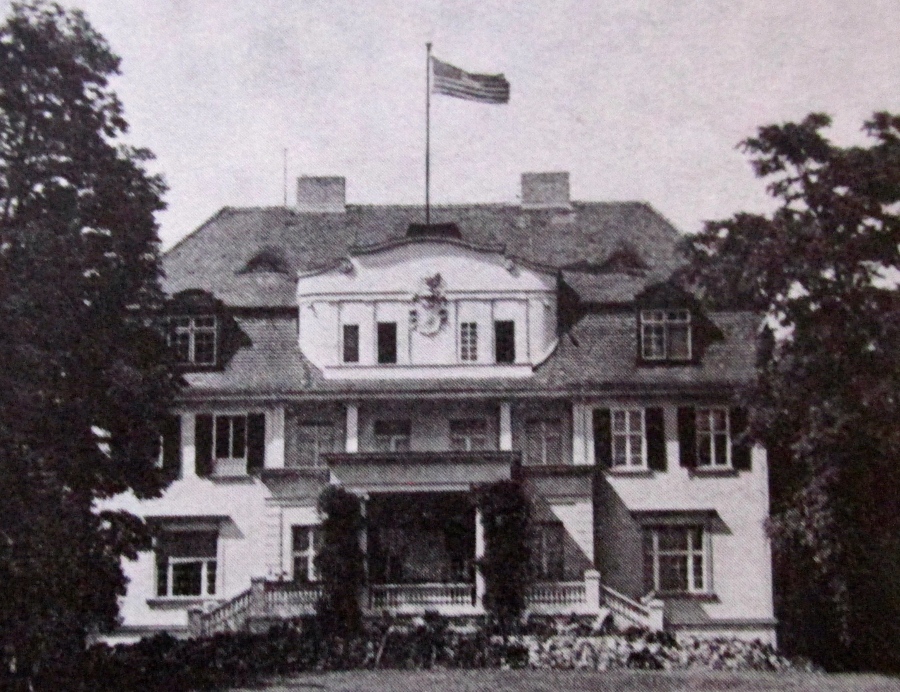 This was spy headquarters in Potsdam, Germany for the Americans who worked for the U.S. Military Liaison Mission. It’s where Tracy spent much of his time while in the service spying. Photo provided

It was the perfect getaway vehicle to leave the East Germans or the Russians in the dust if for some reason they had to make a fast exit.

“My time in the Army was dramatic and exciting, but generally it wasn’t life-threatening,” Tracy said.

When he was discharged in ’68, after thee years in the service, he went to work for Humble Oil Co.

“At the end of 2 ½ years with Humble I was their top salesman in the Northeast,” he said. “I quit, went back to graduate school and got an MBA. Then I did other things like managing manufacturing companies around the country for the rest of my business career.

He and his wife Karla moved to Florida in 2002. They have two grown daughters: Tania and Tara who live out of state.

This story was first published in the Charlotte Sun newspaper, Port Charlotte, Fla. on Monday, April 3, 2017 and is republished with permission.