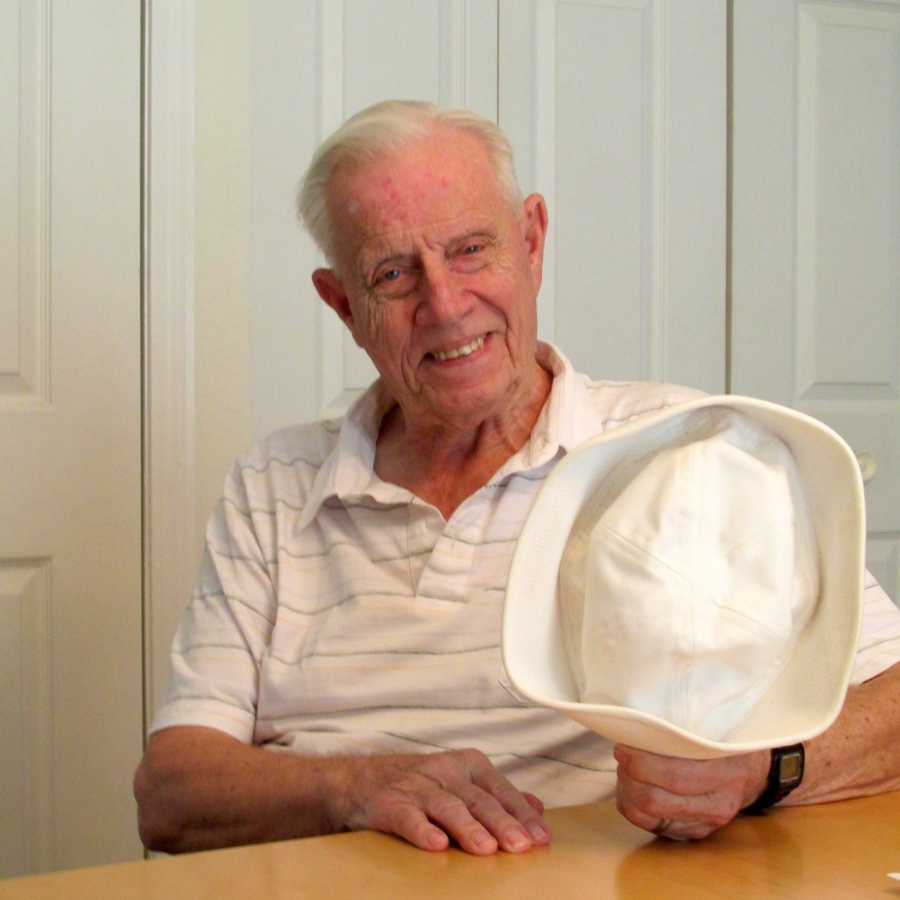 Bob Schaeffer of Maple Leaf Estates mobile home park in Port Charlotte takes a look at the sailor hat he wore as a teenage Navy recruit. He served as a medic on the front lines during the Korean War. Sun photo by Don Moore

Bob Schaeffer of Maple Leaf Estates Golf & Country Club in Port Charlotte, Fla. was a Navy medic attached to the 1st Marine Division during the Korean War. Most of his overseas service was in a slit trench atop Hill 229 overlooking Pyongyang, North Korea. He was on the Main Line of Resistance, The MRL, with the “Leathernecks,” looking across the Demilitarized Zone separating the two Koreas.

“When the Korean War started in June 1950 I was being chased by the draft board,” the 84-year-old recalled. “I decided I didn’t want to be drafted, so I joined the Naval Reserve.”

Within the year Schaeffer was in the Navy taking basic at Bainbridge, Md. After basic he decided to become a medic. He also took medical training at Bainbridge. Next stop was the Marine Corps base at Camp Lejeune, N.C. where he received six more weeks of hospital training.

“At that point two of us were selected to go to Korea as Marine Corps medics. That was a shock,” he said. “I flew the Navy’s Fleet Logistic Airways from Lejeune to Camp Pendleton, Calif. and from there we island-hopped across the Pacific to Korea.

“I ended up at K-16, an air base near Seoul. It was Nov. 1952 when I arrived in Korea. I was 20-years-old,” Schaeffer recalled. “I started off with a Marine Infantry—Fox Company, 2nd Battalion, 7th Regiment, 1st Marine Division.

“We had no winter clothes when we stepped off the plane. We were dressed in fatigues. I’d never been so cold in my life. They put us on six-by, uncovered 2 1/2-ton trucks and drove us to the supply depot where we were issued winter clothes.”

Then he was off to Hill-229. Life on the hill was pretty much a drag. If you stuck your head above the trench line an enemy sniper might use it as a target. At night it was dark and even more scary for the front-line troops.

“Every night we would send out a reinforced squad consisting of a lieutenant or sergeant in charge, 15 or 20 grunts and a medic,” Schaeffer said. “I probably went out on upwards of 30 of these night patrols during the time I was in Korea.

“If we encountered the enemy we were to run like hell in the other direction. The only thing our unit was involved in was a couple of firefights that didn’t amount to much,” he said. “The Geneva Convention said medics would not be armed. I carried a .45 pistol because there were too many bad situations that happened that involved the enemy. Lucky for me I never had to use my .45.”

His primary service in the trenches with the 1st Marine Division was patching up Marines who got tangled up in razor wire during their night snooping undertakings while on patrol.

The more serious problem Schaeffer’s expertise was used to fix was “Immersion-Foot” caused by wearing wet socks while marching in “Mickey Mouse Boots,” specially made insulated rubber boots. Problem was, a Marine’s feet would sweat when he wore these boots. That required a frequent change of socks, something some of the troops were not particularly good at.

You were supposed to wear one pair of socks and keep the other pair tucked in your shirt clean and dry until you put them on. If they didn’t change them they’d end up with “Immersion-Foot.” The end result was like having your foot stuck in a boot of water for a couple of days.

They ended up having Schaeffer check out their feet. If their condition was serious the Marine was sent to the rear for additional evaluation and treatment. Schaeffer became an Immersion-Foot” expert.

On a couple of occasions he ended up in a Marine outpost out font of the MLR watching the other side with binoculars. Schaeffer’s job was still the same—take care of the troops’ medical problems.

“These outposts were our advance warning if there was an enemy assault. Although things were kinda winding down with the war, occasionally we took some in-coming enemy rounds but nothing major,” he said.

“One of the crazy problems with those idiot Marines, they liked to make candles out of hand-grenades. They’d take the fuse out of the grenade and dump out the powder. Then they’d fill the grenade with fuel oil and stick in a wick to make a candle.

“It was dark on the front line at night. We had no electricity. Candles or converted grenades were our only source of light.

“You had to be careful about exposing a light at night on the front line. The North Koreans were excellent mortar-men. They might drop a mortar round on you if they saw a light on our side,” Schaeffer explained.

When the armistice was signed on July 27, 1953 he was still in Korea. By then he was off the front lines back in the area near Seoul.

“Immediately I was shipped back to the USA. It took a troop ship 13 days to sail from Inchon Harbor, in Korea to San Francisco Harbor.

“As we sailed under the Golden Gate Bridge it was a beautiful sunny summer day and the sun was shining on the bridge,” Schaeffer said. “Everybody on deck was looking up at the Golden Gate as we passed under it. It will be in my memory forever.

“But you know what? The Golden Gate isn’t golden. It’s primer red, but it was still a wonderful sight.”

“I took the G.I. Bill when I got home. Graduated four years later in 1958 from a degree in Business Administration from Syracuse University and went to work.”

The first half-dozen years he held several different positions selling insurance and working for the Red Cross. Then he spent the next 20 plus years working for an independent phone company in upstate New York. After he and his wife, Linda, retired they began 21 years ago spending their winters in Florida.

The couple has four children: Barbara, Randy, Richard and Rob. 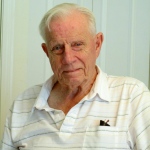 This story was first published in the Charlotte Sun newspaper, Port Charlotte, Fla. on Monday, April 17, 2017 and is republished with permission.