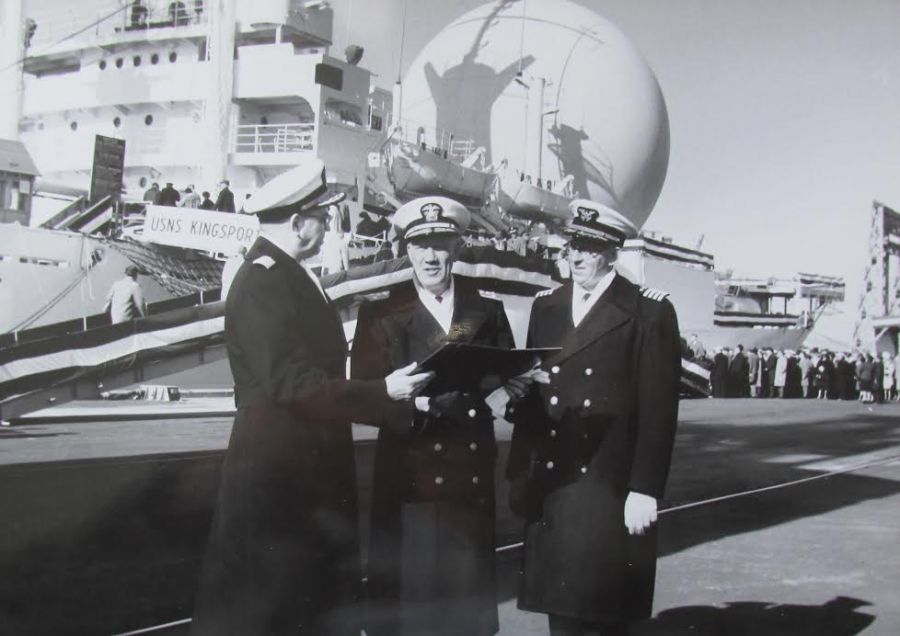 Capt. Bill Reddel (right) with a couple of Navy admirals at the Philadelphia Navy Yard where the satellite communication ship USS Kingsport was refurbished and sent to sea. Note the big spherical radome on the ship in the background. Photo provided

The 455-foot ship was converted to a satellite communications ship at the Philadelphia Naval Shipyard. Near the stern of the vessel was the largest spherical radome ever installed on a ship. It contained a parabolic antenna capable of tracking a satellite in orbit 22,300 miles above earth. 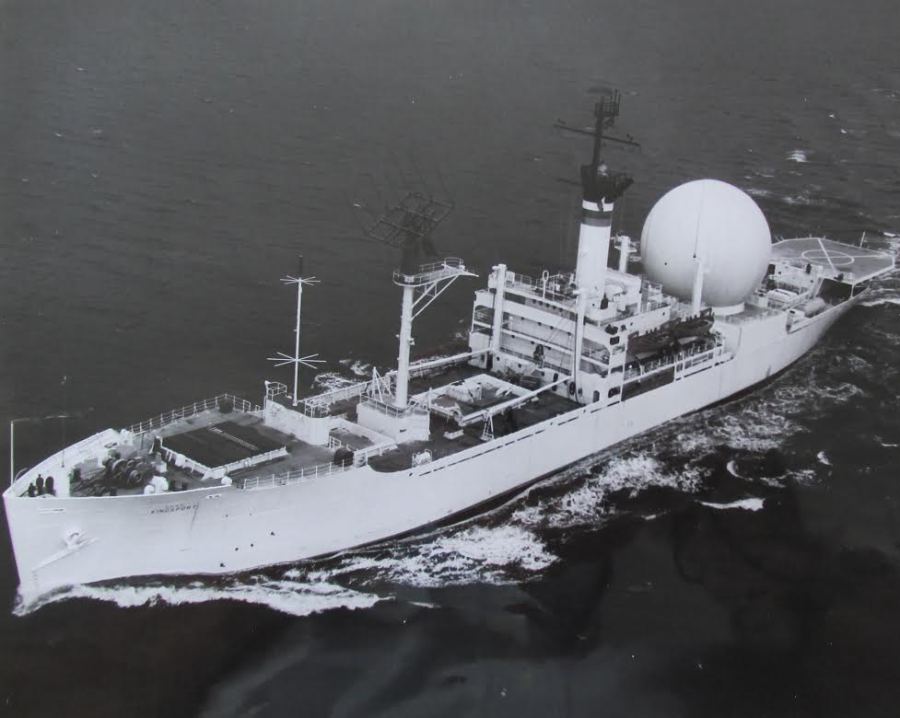 The USNS Kingsport. (T-AG-164). This served as a cargo vessel during World War II.  Reddel skippered when it was used in the ’60s to launch the first communication satalite. Photo Provided

Nigeria was the spot on the globe where the satellite ship could help with the adjustment of the orbit of the new satellite. From there a crew of specialists from the Naval Satellite Communications Group made the necessary adjustments.

Before any of this happened a six man delegation from Nigeria was flown to Canaveral by NASA to check out Kingsport.

“Nigeria had received its independence from Great Britain a few years earlier and was leery of allowing a military ship of any kind to sail into its territorial waters,” Reddel explained. “They were happy to see there were no guns on the ship. However, they weren’t too happy with the ship’s military gray color. So we had to repaint the ship white before we sailed for Africa.

“It was our job aboard the Kingsport to help get the satellite in perfect orbit. Once in orbit we conducted a series of experiments to see how far we could move the satellite while still in orbit.”

After the world began using the new satellite Nigeria issued a postage stamp in honor of the event. It shows the satellite floating in space with a silhouette of the Kingsport below noting the ship did its work in Lagos Harbor. In the center of the stamp is the notation: “Peaceful Use Of Outer Space.”

“We were still working with the satellite two years later. By then the Vietnam War had started and the U.S. decided to launch another communications satellite over the Pacific.

Reddel’s life at sea began more than two decades earlier when he became the skipper of a 50-foot water taxi for a Chicago yacht club when he was 19 in 1940.

When World War II broke out he joined the Military Sea Transportation Service as a civilian in 1942 as the second officer of a small tanker. It provided aviation gasoline during many of the battles fought on New Guinea and the Philippines.

“Eventually I became the skipper of the 210-foot tanker that hauled aviation gasoline to the front lines. We sailed from New Orleans to Australia by ourselves and on to New Guinea. We ran gasoline to every forward base the U.S. captured,” he said.

“My next job, right after the war, was to sail a converted hospital ship to Italy and pick up a shipload of Italian war brides. Their husbands were on board with them, which was a problem for us. Aboard ship the men and women were separated 20 in a compartment. Every morning a bunch of the young couples would be out on the deck with a blanket doing what young married folks do.

“By 1950 the Army had more ships than the Navy mostly run by civilians like me. The Army had hospital ships, troop ships and supply ships. It was about this time all the Army’s ships were transferred to the Navy Department.

“In 1948 I became the captain of a 200 ton ice breaker that sailed from its home port at St. John’s Newfoundland. It supplied the entire ‘Dew Line’ with diesel oil for their electric generators. The ‘Dew Line’ were the military radar units that protected the U.S. from possible Soviet attack by air. We made the 2,000 mile trip to the far north and provided fuel oil to 18 or 20 U.S. RADAE units across the top of the word and onto several bases in Greenland,” he said.

Reddel was still a civilian employee when he skippered USNS Kingsport. (T-AG-164) to the ‘Dew Line.’ The fuel deliveries were made between May and October

From the Kingsport he was assigned to the USNS Bowditch, an oceanographic survey ship that found spots on the sea floor for U.S. nuclear subs to launch their nuclear tipped rockets against targets in the Soviet Union.

“It was 1964 when I was mapping the sea floor for the Navy. On one occasion a Russian communications boat started following us watching what we were doing,” he said. “We took off and left them in our wake and surveyed somewhere else. Our home port for the job was Norway. I did that for about a year.”

After the survey post aboard the “Bowditch” Reddel was reassigned to the Kingsport where he spent the next four years working with satellite communications for the Navy and NASA.

His final assignment was to become the skipper of a submarine supply ship that made a monthly run between Charleston, S.C. and Holy Loch, Scotland.

“Our ship took everything from nuclear war heads to pork chops to the naval base in Scotland once a month. I began the supply runs in 1965 and continued them for 13 years until I retired in 1978.”

Reddel made 156 round trips across the Atlantic aboard the Bowditch during those years at sea. 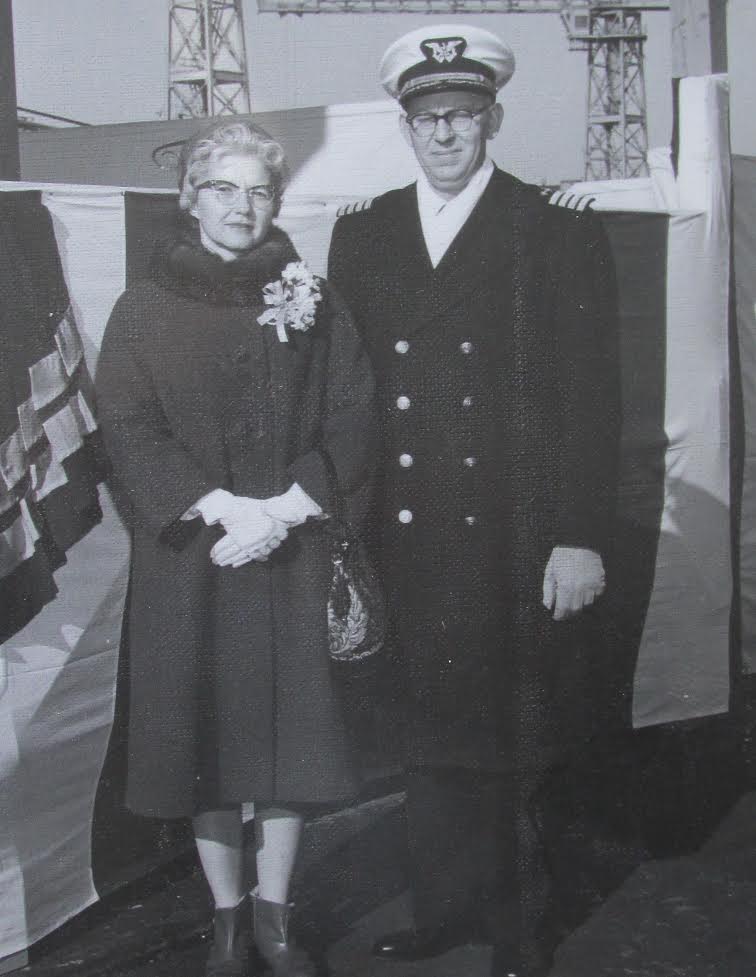 Capt. Reddel and his wife Dorothy aboard the Kingsport about the time she was recommissioned in Philadelphia in the 1960s. Photo provided

He and his wife, Dorothy, began wintering at Paradise Park 27 years ago, in 1978. Until her death a few years ago the couple made the trip from Edisto Beach, S.C. pulling their 34-foot Airstream trailer. Reddel now does it alone.

They have two children: Gail and Paul who both live in Georgia.

This story was first published in the Charlotte Sun newspaper, Port Charlotte, Fla. on Monday, March 9, 2015 and is republished with permission.