Bobbie Caho was a 19-year-old private in the Army just out of boot camp in 1943 when this pictured was taken. Photo provided

At 5-ft, 3-inches tall, Bobbie Caho was the shortest soldier in 106th Artillery Battalion attached to the 27th Infantry Division at the battles of Saipan and Okinawa in the Pacific during World War II. His foxhole buddies called him “Gremlin.”

“Because I was so small I did a lot of showing off. I tried to show the boys in my outfit I could do more than they could,” he said 70-years later with a grin. “I became one of the gunners on a 155 millimeter artillery piece. I spent much of my time carrying 97 pound artillery shells to be fired.”

After basic at Fort Bragg, S.C. they were sent by train to California. His unit climbed aboard a ship for the trip to Hawaii. When they arrived Caho became a member of C-Company, 106th Field Artillery Battalion attached to the 27th Infantry Division.

“We spent months training in Hawaii before getting aboard LST (landing crafts) with our 155 millimeter guns and heading for Saipan. For almost a month from mid-June 1944 until early July American forces slugged it out with the Japanese.

When the shooting stopped most of the 31,000 member Japanese garrison had been wiped out. Some 3,426 American Marines, soldiers and sailors were killed in the battle and and addition 10,364 wounded.

At 91 Caho remembers little about the part he played in the Battle of Saipan except to say, “It was just a terrible battle. We lost so many good people.”

After Saipan, his unit returned to Hawaii for more training. Then they sailed to Espartos Santo in the New Hebrides Islands for a little R & R.

On Easter Sunday Morning, April 1, 1945, “April Fools Day” Caho and the 106th Artillery Battalion was aboard ship off the coast of Okinawa together with hundreds of other Allied ships involved in the invasion fleet. It became the largest invasion of World War II with the most killed and wounded in the Pacific. It short it was the biggest battle in the Pacific during the Second World War.

“Because the Japs had years to work to perfect the defenses on Okinawa, many of their heavy artillery pieces were in caves protected by steel doors that automatically closed after they fired a round,” Caho explained. “They rigged their big guns on railroad tracks that had camouflaged steel doors that automatically closed from the recoil of their guns.

“All of a sudden there was a big explosion and the firing stopped. Our artillery spotter flying a Piper Cub above enemy territory reported that a couple of volunteers with a flame-thrower attacked one of the Jap cannons in a protected cave. During their attack they set off some of the artillery shells in the cave and killed the attackers and the enemy artillarymen.”

The battle of Okinawa hit home for Caho one night while on guard duty when a few Japanese infiltrated their artillery unit’s lines.

“I was scared. I was told to watch out for the infiltrators who were kinda sneaking around our lines that night. I happened to look down and six or seven feet in front of me was a Jap with a rifle and bayonet coming out of a foxhole.

“He lunged at me and stuck his bayonet in my knee. It didn’t do much damage, but I was losing a lot of blood. We went hand-to-hand wrestling each other on the ground. I hit him in the face with my knee and must have knocked him out. I finished him off.

“By this time soldiers all around me were screaming for medics. Medics were working on guys whose arms were hanging off. I decided my injuries were minor even though I was losing a lot of blood. I decided to get my sewing kit out of my pack and sew it up myself,” Caho said. “They don’t give you a purple heart if you sew yourself up. 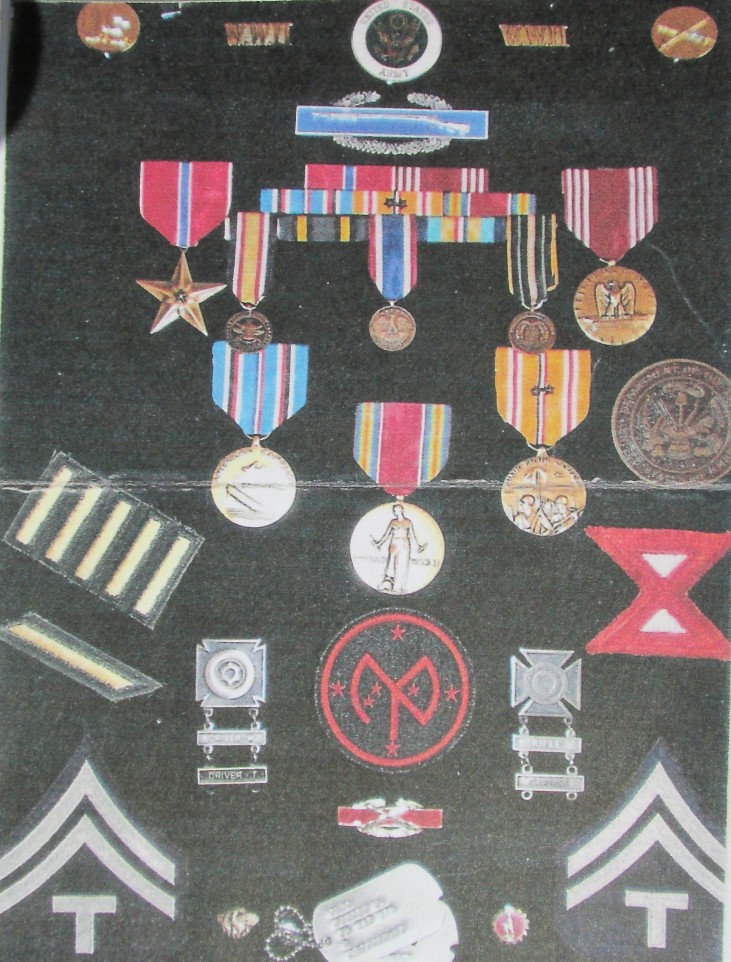 Former Sgt. Bobbie Caho has a shadowbox full of medals he received during his time with the 27th Infantry Division in the Pacific in World War II. To go with his Tech Sergeant stripes he received the Combat Infantryman’s Badge, Bronze Star with “V” for valor and World War II Victory Medal among others. Photo provided

He spent the entire 82 days battling the Japanese on Okinawa after repairing his bayonetted knee.

“Nobody told us anything about the Atomic Bomb. When they dropped the bomb on Hiroshima we were still on Okinawa,” Caho recalled. “We could feel this rumble. We though a piece of the island had fallen into the sea. But what it was, was the shock from the Atomic Bomb being dropped on Hiroshima.

“A few days later we were aboard ship in Yokohama Harbor a couple of miles from the Battleship Missouri where the surrender was signed,” he said. “With a pair of binoculars I watched the Japanese sign the surrender.

“A few hours after the surrender was signed we went ashore. We were put aboard a little train at Yokohama and took a 160 miles train ride to a beautiful little town in the mountains called Wakanatsu.”

Caho and his unit became part of the occupation troops. They were billeted in barracks that once housed Japanese Imperial soldiers during the war.

“The Japanese people in Wakanatsu were wonderful. I was walking down the street in Wakaatsu and a Japanese lady walked out of her home and asked me in perfect English where I was from. She had been an English teacher before the war.

“I told her Peoria, Illinois.”

“‘No’ she said, ‘Where were you just before you arrived here?’

“‘Okinawa,'” I replied. A moment later she wiped a tear from her eye and said, ‘My husband was killed on Okinawa.’

“I didn’t know what to say. Then she invited me into her house to meet her parents. I told her, ‘No.’ I figured I’d survived the war this far and I didn’t want to get killed at this late date.

“Then she said something and her parents come out of the house and the three of them invited me in. I wasn’t carrying a side-arm, but I finally relented and went in. The lady brought a tray full of little round balls with a big ball in the center.

“She asked me to try one, but I hesitated. Then the three of them ate some of the cooked balls on the tray and so I decided to try one. It was a lot better than the Army’s C-Rations I had been eating.

“After trying a couple of the cooked balls she told me the big one in the center of the try was mine. I hesitated, but she said again it was mine. I picked it up, took a bite and a pair of fish eyes were staring at me. In Japan fish heads are a delicacy, but I can tell you I almost lost it.”

A short time later, Caho and some of his Army buddies got word they were going home. The war was over for them.

“We took a transport from Japan and 10 days later we were in Seattle, Wash. When we reached Seattle they put me on a train and I ended up at Jefferson Barrack, St. Louis, Mo. where I was discharged. It was Jan. 8, 1946, my birthday. It was three years to the day from when I was drafted. I was 22.

After two years of night school Cato graduated with a degree in Wood Technology. He became a cabinet maker and went to work in a cabinet shop in Peoria. A few years later he owned the shop. For the next 55 years he built kitchen cabinets primarily for home owners in the area.

In 1983 he and his wife retired and they moved to Florida. Caho had five children: Kathleen, Mary, Daniel,Patrick and Timothy. He lives with Mona, his third wife. His other two wives passed away.

This story was first published in the Charlotte Sun newspaper, Port Charlotte, Fla. on Monday, March 16, 2015 and is republished with permission.

Click here to view Caho’s collection in the Library of Congress.