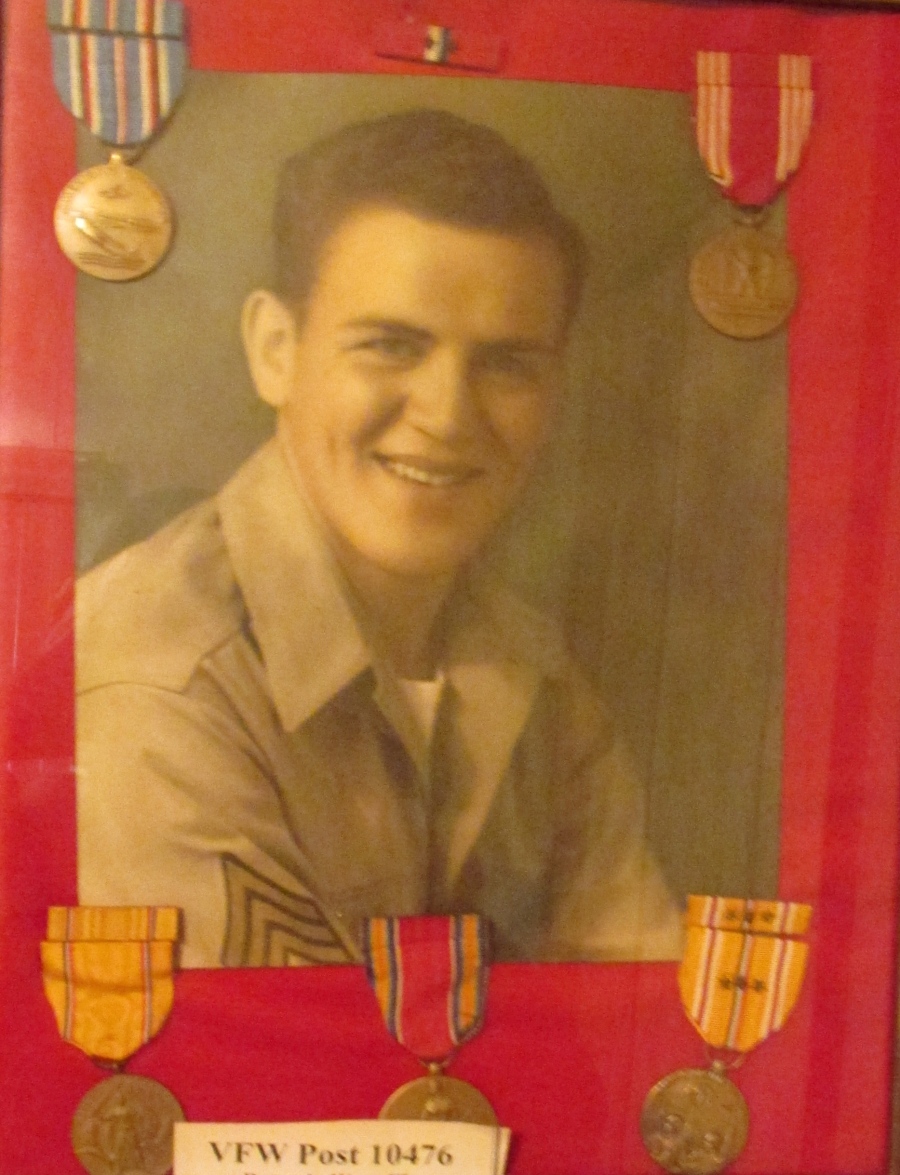 This picture that hangs on Henry Cwiklinski's bedroom wall is a shot of him during the war when he was a sergeant who took part in the recapture of Leyte Island in the Philippines during World War II. Photo provided

Henry Cwiklinski of Indigo Isles in Englewood, Fla. was in the second wave that attacked the Japanese-held island of Leyte in the Philippines on Oct. 20, 1944 during World War II. He was a member of the 106th Field Artillery Battalion, a National Guard unit, from Buffalo, N.Y.

Cwiklinski joined the guard in 1939 with several of his Buffalo buddies. He was 21 at the time. He and his friends signed up for three years. By the time they landed on Leyte, his guard unit had been federalized by President Roosevelt. Cwiklinski was a sergeant.

“We came into the beach on landing crafts from ships off shore. When we hit the beach we had four hand grenades hooked to our chests,” the 97-year-old veteran recalled. “All of a sudden the Japanese opened up on us with artillery and mortars while we were lying in the sand on the beach.

“My whole insides were shaking. I was scared when they first started firing at us. After the shooting stopped we all got up and I was alright after that,” he said.

“I got over being afraid. I figured out it was either them or us.

“But that didn’t make it any easier when I drew down with my rifle on my first Jap. I wanted somebody else to shoot him. I squeezed the trigger slowly and all of a sudden the gun went off and down he went. It was the first time I ever killed a man with a rifle. I felt terrible about it.

“We had been on the island a couple of days. I was walking along with my staff sergeant and all of a sudden we heard this ‘Poof’ and he was lying on the ground. I rolled him over. My sergeant had a massive chest wound. He was dead.

“I got seven riflemen with their M-1 rifles and told them to empty their clips on seven palm trees near when the sergeant was killed. Each soldier shot eight rounds at a tree.

“All of a sudden a Jap sniper fell out of one of the palm trees. He was dead when he hit the ground,” Cwikliski said. “I climbed up in the tree he fell from and found a little wooden platform where the sniper sat. There was a partially eaten bag of rice on the ledge where he had been.

Gen. Douglas MacArthur comes ashore on Leyte in the Philippines in October 1944 during the battle and tells the people of the Philippines, “I have returned.” U.S. Army Photo

“We were still on the beach when Gen. (Douglas) MacArthur walked up to us with a group of aides. He came from the other side of the island from where we landed.

“I was standing there with two groups of 25 men from my outfit on both sides of me when the general came up. I saluted, he returned my salute and said, ‘Gentlemen, you’ve done a beautiful job. I congratulate you.’

“Then he walked off down the beach with his aides following after him. He showed up again for ‘Revelry.'”

Shortly after he came ashore on Leyte MacArthur announced over the radio, “People of the Philippines, I have returned! By the grace of Almighty God, our forces stand again on Philippine soil

Sitting at his kitchen counter remembering the events of that day so long ago, the old soldier observed, “MacArthur was the best damn general I ever served under.”

After Cwiklinski’s unit fought its way off the beach it was more of the same day after day. But after 70 years his memory of what happened to the 106th Field Artillery Battalion is fuzzy even though he said he spent almost a year on Leyte.

He does remember the end of the war.

“We were out in the field doing nothing much when we got word World War II was over. We didn’t believe it until we got aboard a troop transport and sailed for Honolulu. A few days later we reached San Francisco. It was July 1945.

Bebe and Henry Cwiklinski on their wedding day, Oct. 13, 1945 in Buffalo, N.Y. He had returned from war in the Philippines three months earlier. Photo provided

“I took a milk train all the way across the country back home to Buffalo. The train stopped at every little town along the way,” he said. “My mother and father didn’t know I was coming home. I showed up at the front door at 10 p.m. My mother opened the door, took one look at me and burst into tears.”

Three months after he returned from the war he and his childhood sweetheart, Bebe, were married on Oct. 13, 1945. They were married for 67 years until her death two years ago.

Before the war Cwiklinski drove 18 wheelers. He worked a number of jobs after the war until he found his niche again driving trailer trucks. He did that for 31 years until he retired in 1980. Then he and Bebe moved to Englewood.

The couple had four children: Cynthia, Bernice, Loretta and Mark.

This story was first published in the Charlotte Sun newspaper, Port Charlotte, Fla. on Monday, Feb. 23, 2015 and is republished with permission.

Click here to view Cwiklinski’s collection in the Library of Congress.