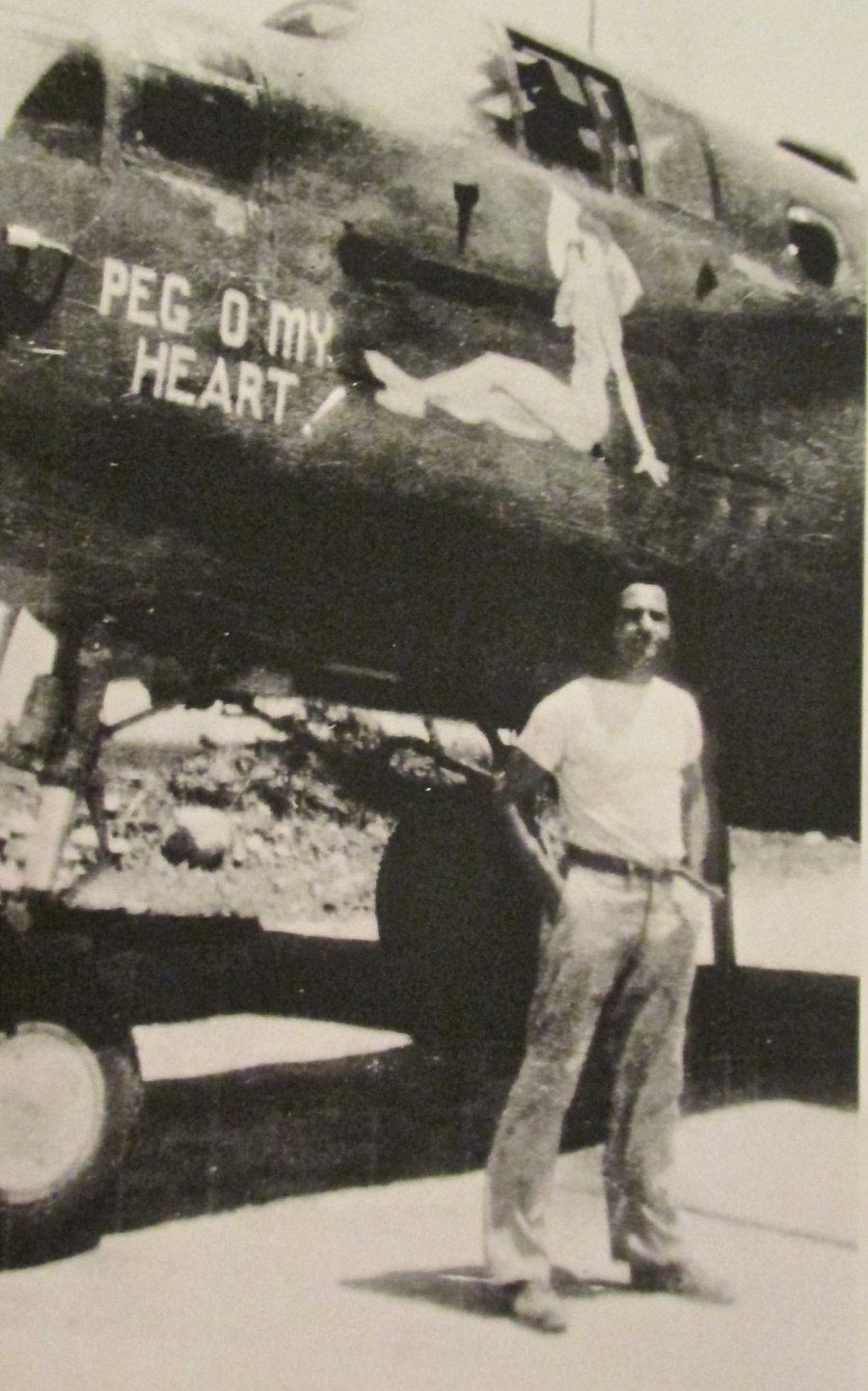 On his second tour of duty, Bates is pictured in front of his B-25 Mitchell bomber. He was in the 12th Air Force in Italy during World War II. Photo provided

In 1940, Ralph Bates, of Port Charlotte, Fla. was 18 when he joined the Royal Canadian Air Force. Before he completed flight training in Canada, the Japanese attacked Pearl Harbor. The young aviator requested a transfer to the U.S. Air Force.

By mid-February 1944, he was a staff sergeant and tail gunner in a B-17 Flying Fortress named “Hard Luck.” He was a member of the 100th Bomb Group, 13th Wing, 8th Air Force based in Thorpe Abbotts, England, 20 miles north of London. On July 17, 1944, he and the other nine members of his bomber crew completed their 35th mission and headed home.

Back in the U.S., Staff Sgt. Bates volunteered for a second combat tour. On March 6, 1945, he was assigned as a tail gunner on a B-25, twin-engine attack bomber. He was part of the 446th Bombardment Squadron, 321st Bombardment Group, 12th Air Force flying out of Corsica. He flew 31 combat missions over Nazi-occupied Italy until just before VE-Day.

Why would anyone sign up for a second combat tour during World War II when it wasn’t required?

An orphan boy who had gone to war at 18 a lifetime ago, the 82-year-old Port Charlotte man explained, “My feeling was I had such a good life I owed it to my county. So I volunteered for a second tour of duty while on leave at Miaimi Beach in August 1944.”

Burke started keeping a war diary in a pocket-sized green and black notebook shortly before he flew his first mission in a “Flying Fortress” (B-17 bomber) called “Hard Luck” as a member of the 8th Air Force. Here are some excerpts: 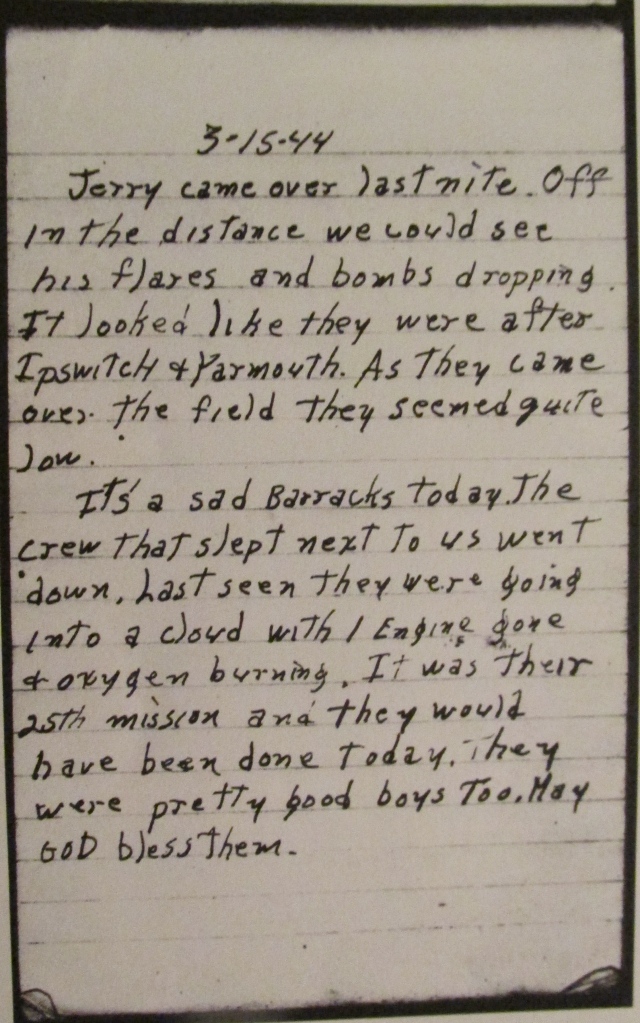 Bates’ notes tell a sad tale about his buddies, who slept next to him, being shot down in flames and killed during a mission in their B-17 bomber flying over Nazi-occupied Europe during World War II.

“3-15-44: It’s a sad barracks today. The crew that slept next to us went down. Last seen they were going into a cloud with one engine gone and oxygen burning. It was their 25th mission and they would have been done today. They were pretty good boys, too,. May God bless them.

“3-16-44: Went to Augsburg, Germany today, 9 1/2 hour trip mostly on oxygen. Light flak all the way from French coast. P-47 (Thunderbolts) and P-38 (Lightning) escort from coast to target and back. Heavy flak over target. Got in some good shots at ME-109s and 110s. Saw one ‘Flying Fortress’ burn in air. Another crew bailed out over mountains. No holes in our ship.

“3-16-44: We hit Chateau-Durn, France today. There was plenty of flak over the target. Saw two ships explode. We got two holes in our ship–one in wing and one in tail. The piece in tail landed in ammo box about four feet from my rear end. Too close for comfort.

4-24-44: Intended to bomb Friedrichshafen, Germany today. Flew over target, but didn’t bomb. Flak was hell and accurate. About 50-feet away from us a bomber was hit and the explosion seemed to fill the sky with flames. The pieces flew by so close I thought I could touch them. We had about 10- minutes over the flax left. I wondered if I’ll ever be able to put into words the feeling one gets when men all around you are getting shot up and you are expecting it any minute. There is only one person who must be looking over us.”

These were the gunners who flew in a B-17 “Flying Fortress” named “Hard Luck” in the 8th Air Force in Europe. Bates is the airman at the far left. Photo provided

The B-17 mission Bates remembers best was a secret one.

“It was July 14, 1944 and we were to drop ammunition, guns and food to the Free French near Bordeaux, France,” he recalled. “The weather was good and we were flying a few hundred feet above the trees in our B-17.

“The stuff we were to deliver was packed in our bomb bay. It would be parachuted to the French when we reached the target area. We had been flying just over the trees when we came to this great big open field. We dropped our stuff right where we were supposed to. When we circled back over the drop zone we could see hundreds of people on the ground picking up the stuff.

“It made me feel good we were doing something to help someone survive instead of dropping bombs on people,” Bates added.

They made it back to England flying alone. They never saw a German fighter or encountered any flak from enemy anti-aircraft guns.

When their bomber returned from bombing Aukerre on July 17, 1944, their last combat mission, all 60 bunk buddies in their barracks were waiting for them along the flight line. it was a big deal for all of them, particularly the crew of “Hard Luck” who were the honored guests of a farewell banquet.

Bates wasn’t back in the States long when he decided to volunteer for a second tour of duty. He was assigned to the 321st Bomb Group, 12th Air Force. He began flying off the island of Corsica in a B-25 Mitchell, twin-engine attack bomber on March 6, 1945.

“There was all the difference in the world between flying in a B-17 and flying in a B-25. We didn’t fly high altitude saturation bombing runs in a B-25,” he said. “We did a lot of dive bombing and flew strafing runs against ground targets in our 25. We didn’t wear oxygen masks because we flew at low altitudes.

“I also flew as a tail gunner and bombardier in a B-25– ‘Peg O’ My Heart.’ We hit the Brenner Pass, the Germans’ escape route in northern Italy. We strafffed railroad yards, trains and Germany supply convoys. You could see what we were hitting with our bombs and machine-guns. It wasn’t at all like flying in a B-17,” he said.

His most memorable time in “Peg O My heart” came on a four hour-and-10 minute flight to Margherite, Italy when their twin-engine plane had its port engine shot out by flak.

“We were coming back from a low-level bombing mission when our engine was knocked out by flak. We were just above the waves on our way back to Corsica when we saw these all black ME-109 fighters at a distance following us,” Bates said. “We had a lot of respect for the black enemy fighter planes.

“All of a sudden we heard someone say on our radio, ‘Little Buddy, we’ve come to help you. We see those fighters trailing you, but they won’t be trailing you much longer.’

Bates completed his 31st combat mission aboard his B-25 on April 25, 1945. Two weeks later the Germans surrendered, it was VE-Day.

By the time the Korean War broke out in 1950 he decided to repup in the Air Force. He spent 20 years to the day in the millitary serving in various capacious. He retired as a master sergeant in 1967.

Bates holds the leather flying cap he used as a tail gunner in B-17 and B-25 Bombers during World War II. In front of him ar emaps and documents about the time he served in the second World War. Sun photo by Don Moore

Bates began a second career as a high school history, government and psychology teacher. He spent the next 15 years teaching school until he and his wife retired and moved to this area in 1982.

This story was first published in the Charlotte Sun newspaper, Port Charlotte, Fla. on Sunday, March 6, 2005 and is republished with permission.

Ralph was an extremely patriotic man who served 20 years in the United States Air Force. Prior to his service in the Air Force, Ralph enlisted in the Royal Canadian Air Force in early 1941 during World War II. He was in training as a Tail Gunner on the Canadian Bombers. After Pearl Harbor, he was released from the Canadian Air Force to join the United States Army Air Corp. He was a Tail Gunner on the B-17 Bomber and had many missions over the European Theater. He completed his missions and then signed up for an additional missions on the B-25 Bomber. In all, Ralph completed 66 combat missions during World War II.

In addition to his service in the Air Force, Ralph was a highly decorated airman; among his many decorations he was awarded the Distinguished Flying Cross.

While in the Air Force, Ralph also completed his Bachelor’s Degree in Education. Upon retirement, Ralph earned his Master’s Degree in Education and taught high school “at risk” students in Nebraska. While working as a teacher, Ralph involved himself in the American Legion and was asked to be a speech writer and travel coordinator to the National Adjutant. During his time with the American Legion, he was honored with meeting many political figures including presidents and popes. After finishing his assignment with the American Legion, he moved to Minerva, Ohio where he again continued to teach “at risk” high school students.

Upon his retirement from teaching, he relocated to Port Charlotte, Florida and started a flag and flag pole business. Ralph enjoyed this business for many years and was very generous with flag contributions for charitable events. Due to advanced age and medical problems, Ralph was forced to retire.

Ralph was a very positive gentleman. He always looked on the bright side of life and any hardships that may have come his way. He was born into very humble beginnings and lost both his parents at the age of 9 years old. Regardless of the obstacles that were put in front of him, he always persevered and rose above them. He was a loving husband and a loyal friend. He loved life and lived it to the fullest. He is dearly missed by all who knew him.

A Viewing will be held from 6-8:00PM on Wednesday, September 26, 2012 at Paul Schelm Funeral Home, 12687 SW County Road 769 (Kings Highway) in Lake Suzy and from 10-10:30AM on Thursday, September 27, 2012 at First Baptist Church, 20035 Quesada Avenue in Port Charlotte. Funeral services will be held at 10:00AM at the church. Burial with full military honors will follow at 1:30PM at Sarasota National Cemetery in Sarasota. Reception will follow burial.

Please visit Ralph’s tribute wall at http://www.schelmfh.com to share memories and to send condolences to the Bates family.