Lt. Holland, at the left, and Al Meersman of Port Charlotte, Fla. on the right, take a Jeep across the Rhine River on a pontoon bridge at Remagen after the original bridge collapsed during World War II. Photo provided

Pfc. Al Meersman was behind quad-fifty caliber machine guns mounted on a halftrack when it rolled out of an LST onto Omaha Beach on D-Day plus one, June 7, 1944. Eleven months later he and his four buddies were on their halftrack when they met the Russians, who were advancing westward fighting the last of the German army at Pilsen, Czechoslovakia on May 10, 1945.

In between these two dates Meersman did a lot of killing and a lot of praying. He survived World War II without a scratch.

Meersman joined the Army on July 14, 1943 after graduating from high school a month earlier in his hometown near South Bend, Ind. By February 1944 he was a replacement soldier in England. He became part of Gen. Courtney Hodges 1st Army preparing for the invasion of Hitler’s Europe. 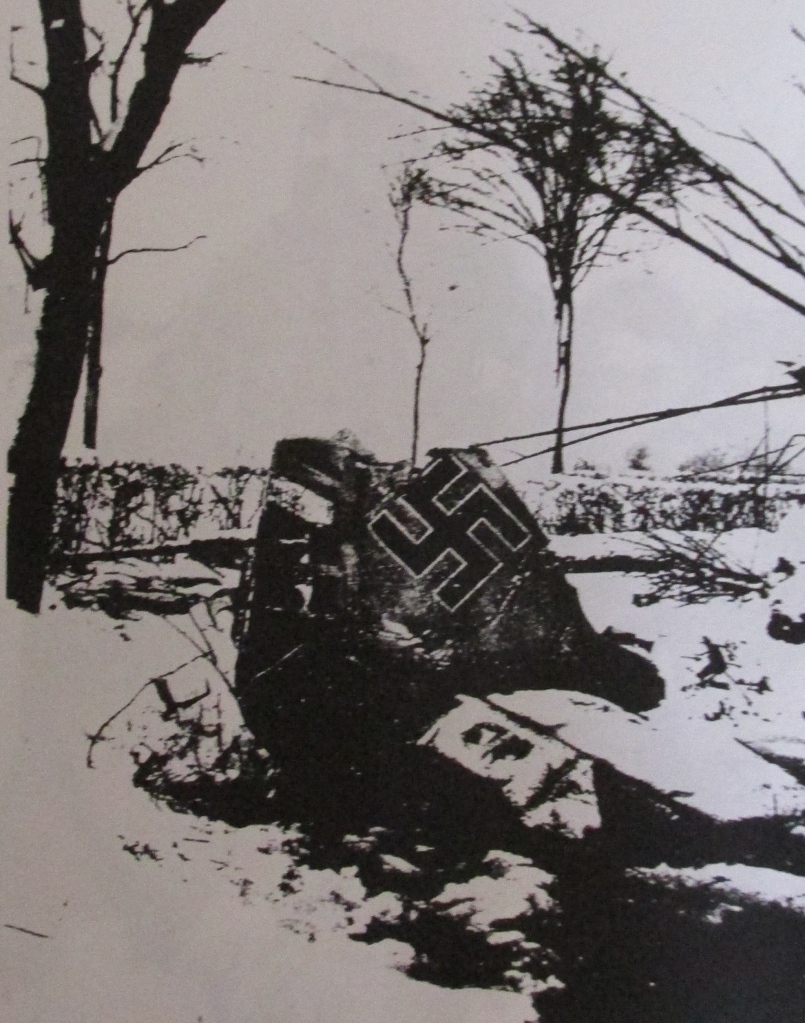 This Focke-Wulf 190 fighter was downed by Meersman during the “Battle of the Bulge.” It was one of two he shot out of the air during the war. Altogether his half-track crew downed four German fighters. Photo provided

The 18-year-old “dogface” was in Battery D, 46th Anti-aircraft Battalion, 28th Division attached to the 1st Army training in England before the invasion.

“As we went out of the front of the ship onto the beach at Normandy the Germans were shooting at our halftrack from the cliffs above the beach,” he recalled as he sat at a table in his Port Charlotte, Fla. home. “We crossed the beach and drove over the sanddunes into the hedgerows.

“We supported the infantry with our quad-fifties. They used us to spray the hedgerows where the Germans were dug in with our machine guns and mortars,” Meersman explained.

The enemy had every foot of French landscape zeroed in for their 88-mm artillery pieces and mortars. It was tough going for the men of Battery D. When they weren’t being hammered by German artillery they were being strafed by Focke-Wulf 190s and Messerschmitt 109 fighters.

A week or so after Meersman and his buddies came ashore they broke the German encirclement at St. Lo a few miles from the landing beach.

“We took the town four times. The Germans were shooting at us from all directions,” he said. “It was bad.”

From St. Lo the 1st Army headed for Brest and the Cherbourg Peninsula. After another 10 days of hard fighting they reached their destination around Le Mine, France where his unit bivouacked a few days.

By late July they had moved on to the French Riviera. The soldiers of Battery-D got a few days rest. For a change the fighting had died down and it was relatively quiet.

This was Meersman’s half-track crews at Malmedy, Belgium. He is the guy at the right, bending over with the fur collar. This is near where 84 American POWs were gunned down in the snow by members of the Waffen-SS. Photo provided

It didn’t last. His outfit followed Gen. Charles de Gaulle and the Free French Army into Paris for the liberation of the city in August 1944.

“We guarded a bridge across the Seine River right beside the Eiffel Tower,” Meersman said. “German snipers were shooting at us and we were being strafed by enemy fighters.

“A Focke-Wulf 190 circled around the Eiffel Tower shooting at our halftrack. On the second pass I got him with my machine guns,” he recalled. “He crashed a short distance from us.”

Each machine gun mounted on the halftrack could fire more than 500 rounds of .50-caliber ammunition a minute. The four guns he controlled put some 2,000 rounds in the air every 60 seconds.

Two weeks after the Americans arrived in Paris the Germans were on the run. They were retreating as their gas and ammunition supply was seriously diminished.

By Sept. 5, 1944 Meersman and his anti-aircraft battery reached Luxembourg City, Belgium. This was near where his grandfather and grandmother, Gentiel and Marie Meersman, lived. He hoped to visit them while his unit was fighting in the area.

Gentiel and Marie Meersman are pictured in their home near Luxembourg City, Belgium home sometime before his grandfather was shot by the Germans during the war. Photo provided

He didn’t get a chance until after the war. By then his grandfather had been shot by the Germans for collaborating with the Allies. He was able to spend a week with his grandmother and uncle in late 1945, after VE-Day.

By Sept. 24, 1944 his unit had moved on to St. Vith, Belgium. They were surrounded by a German infantry division. Gen. George Patton’s 3rd Army rescued them at St. Vith.

From there Meersman and his halftrack headed for Bastogne, Belgium and the Battle of the Bulge . It was here that he shot down his second Focke-Wulf 190 with his quad-fifties.

“The German fighter strafed us at Bastogne. When he banked around us I shot him down,” the old soldier said.

They were at Malmedy, Belgium shortly after the bodies of 84 unarmed American POWs were found in the snow. They had been gunned down during the ” Battle of the Bulge,” the biggest German offensive on the Western Front. A Waffen-SS unit committed what would become known as the “Malmedy Massacre.”

It was on to Remagen and the bridge across the Rhine into Germany for the men of Battery-D.

“My platoon was the first one to cross the Rhine River on a platoon bridge built by our engineers after the original bridge across the river fell down,” he said. “We went across in a Jeep. The Germans were shooting at us with 88s. The 88-shells whistled when they went by. If you didn’t hear them anymore you’d better get out of the road.”

Al Meersman of Port Charlotte, Fla. looks at pictures of himself and medals he received for serving in an anti-aircraft artillery unit with the 1st Army in Europe during World War II. His commendations include five battle stars for serving five major campaigns: Normandy, Northern France, Ardennes, Rhineland and Central Europe. The European Theater of Operations Ribbon, Good Conduct Medal and the World War II Victory Medal. Sun photo by Don Moore

“We were on the go in our halftrack as the Germans kept falling back to the East. By war’s end we were in Berneck, Germany. Two days later, May 10, 1945, our unit headed southwest into Pilsen, Czechoslovakia when we met up with the Russians.”

This story was first published in the Charlotte Sun newspaper, Port Charlotte, Fla. on Monday, July 5, 2004 and is republished with permission.

He was born on April 24, 1925, in Mishawaka, Indiana, to Gentile and Margaret Meersman. Mr. Meersman was a veteran of World War II, serving with the U.S. Army as a 50-cal. machine gunner on a half-track and earned seven battle stars. Albert was a parishioner of San Antonio Catholic Church, American Legion Post No. 110, Lions Club and Disabled American Veterans, all of Port Charlotte. He was a member of B.P.O. Elks Lodge NO 2763, Deep Creek, and was on the board of directors for Visually Impaired Persons of Charlotte County.