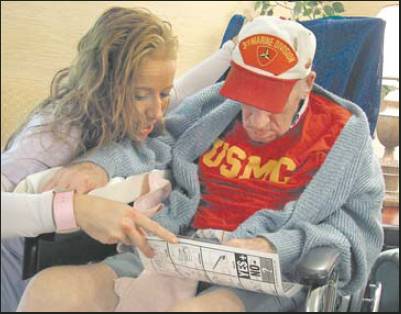 Helping out: Tara Turner, assistant director of nursing at Deep Creek Rehab & Nursing in Port Charlotte, Fla. helps Ray Richards, who fought with the 3rd Marine Division at Iwo Jima during World War II, tell his story with the use of a letter board, one letter at a time. Sun photo by Don Moore

Ray Richards’ latest battle is as tough as the one he fought more than 60 years ago, when, as an 18-year-old Marine in the 3rd Marine Division, he saw action and was wounded at the start of the Battle for Iwo Jima during the final months of World War II.

The 82-year-old former North Port, Fla. “Leatherneck” is holding his own at Deep Creek Rehab & Nursing Center in Port Charlotte while recovering from brain surgery. The surgery earlier this year left him almost unable to speak and nearly immobile.

Charlotte, his wife of 57 years, and Tara Turner, assistant director of nursing at Deep Creek Rehab, have been working to get him in shape to make the flight back north to Philadelphia, Pa. Several of the couple’s eight children, two of whom are nurses, will be waiting for him. When Ray arrives he will be taken to a nursing home near Quakertown, some 50 miles west of Philly.

The couple retired to North Port several years ago and expected to remain in sunny Florida. However, Ray fell at home shortly after the first of the year and ended up in Sarasota Memorial Hospital, where he underwent a brain operation which left him totally dependent on others.

Turner said when they got him at the Port Charlotte rehab center, he couldn’t talk, couldn’t walk and was almost completely disabled. Charlotte credits Turner and her staff with nursing her husband back to partial health.

He’s well enough at this point to fly from Fort Myers to Philadelphia on Dec. 1, Charlotte said.

Charlotte said they need the support their family provides back up in Quakertown. If all goes as planned, Ray will be taken by ambulance to the Fort Myers International Airport for the trip north. Several hours later, he will be in a nursing facility up there surrounded by his sons and daughters.

While wearing a bright red T-shirt with USMC emblazoned across its front in bold gold letters and a 3rd Marine Division ball cap, the old Marine sat in a wheelchair at the local nursing home and tried to tell his war story with the use of a sheet of paper printed with the alphabet and numbers from 1 to 10. He laboriously pointed one letter at a time spelling out his story with the Turner’s help.

Pvt. Raymond L. Richards Jr. was a member of K Company, 3rd Battalion, 21st Marine Regiment, 3rd Marine Division that landed on Iwo Jima on Feb. 19, 1945, the first day of the historic battle. His company was in the fourth wave of Marines to hit the black volcanic beach on the 8-square-mile island. Four days later, he was injured by shrapnel from an enemy artillery shell.

As Ray struggled one letter at a time to tell his story, Charlotte handed me a copy of the front page of the Pawtuckett Times newspaper from Pawtuckett, R.I., with his picture on it. The cutline under the picture of a teenage Marine accepting a medal reads: “Pvt. Raymond L. Richards Jr. wounded by Japanese artillery fire in the Battle for Iwo Jima shown here in the Pacific area as he receives the Purple Heart from his commanding officer.”

The battle to tell his story one letter at a time became too much for him. He quit and slumped in his wheelchair, exhausted.

Charlotte had arrived at his Sun interview prepared. She brought her husband’s Ka-Bar knife all Marines carry into battle. The knife and scabbard were mounted on an oval wooden plaque as a birthday present from one of his sons. The small gold plaque below the knife reads: “Pvt. Raymond L. Richards, K Company, 3rd Battalion, 21st Marine Regiment, 3rd Marine Division, Iwo Jima.”

Sitting in a common room at the rehab center, Charlotte said her husband graduated as an engineer from Providence College in Providence, R.I. after the war. She shook her head as she looked at him in his present condition.

“With eight children, you go through some good times and some bad times. I can tell you I’ve never loved him more than I do right now,” she said with tears in her eyes.

This story was first published in the Charlotte Sun newspaper, Port Charlotte, Fla. on Monday, Nov. 26, 2007 and is republished with permission.