New 17-year-old recruit Clarence Moore of Tangerine Woods in Englewood is pictured in 1943 when he graduated from Great Lakes Naval Processing Center near Chicago. Photo provided

They called it “Nimitz’s Secret.” All 10, 100-foot-long steel sections were towed by ship from San Francisco to Espiritus Santo, the main island in the New Hebrides chain. This floating steel dry dock for America’s Pacific Fleet during World War II was a military secret and a game changer.

“On our first trip to the war zone aboard the USS Lynx, a 485-foot-long freighter, we towed one of 10 sections of floating dry-dock from San Francisco to the New Hebrides at 4 knots. We had to cope with Japanese subs,” Clarence Moore, the 90-year-old former boatswain’s mate, recalled. “We made it in 45 days.

“A number of destroyers went with us and provided screening from enemy submarines. One of our destroyers sunk an enemy sub with its depth charges,” he recalled.

The floating dry dock was a revolutionary idea Nimitz, commander and chief Pacific fleet, and his staff dreamed up. It allowed repairs to be made to American ships in the war zone. The end result: damaged American war ships were back in action much quicker than damaged Japanese ships.

The way the dry docks worked, they were filled with sea water and sank. Then the battered ship was brought dockside, the water pumped out and the dock became buoyant and cradled the ship in need of repairs. 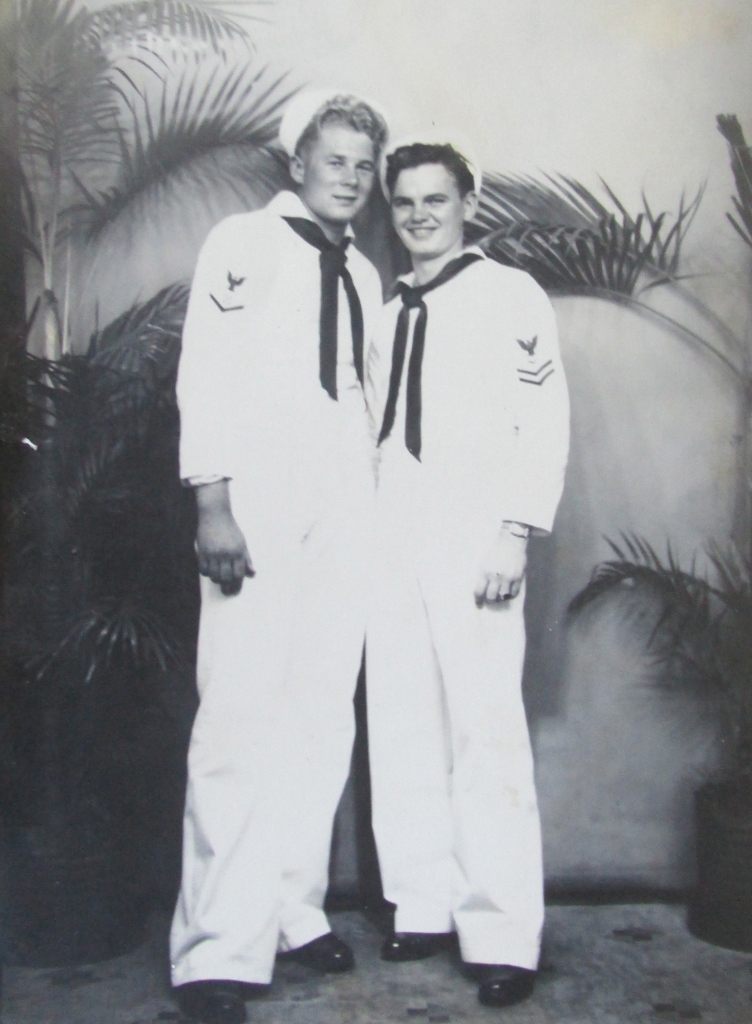 Clarence Moore of Englewood and Paul Kosar getting their picture taken at Pearl Harbor near the end of World War II. Photo provided

After reaching the New Hebrides, Moore and the Lynx headed back to the States for another load of ammo and food. They brought the cargo back to the Philippines.

“From there we loaded the 24th Corps of Army Engineers aboard the Lynx and headed for Okinawa. We arrived shortly after the largest island invasion in the Pacific came ashore at Okinawa.

“We spent considerable time aboard ship guarding it from Japanese saboteurs. They would swim out in the dark and attach explosive charges to our ship.

“I remember while we were at Okinawa a kamikaze attacked the USS Hope, a hospital ship, that was all lit up at night. I don’t recall how many were killed or wounded in the attack, but I do recall that it didn’t go over well with our Marines.

“At night they fogged to protect our fleet from kamikazes,” he explained “We were on our way back to the States to pick up more food and ammo when the carrier USS John Hancock was also hit by a kamikaze at Okinawa. At the very end of the war I went aboard the Hancock as a member of its crew,” he said.

“On my last trip aboard the Lynx to San Francisco we got word they had dropped an atomic bomb on Hiroshima. We picked up more supplies and were 400 or 500 miles out at sea headed back to the war zone when we were told the war was over.

“The Lynx turned around at sea and headed back to California. When we got to San Francisco they wouldn’t let us off the ship to go party because the civilians in Oakland, a nearby town, said there was too much celebrating going on,” Moore said.

The pilot of this Navy Corsair died in a fiery crash attempting to land on the deck of the carrier USS John Hancock, CV-19, during a practice session off San Diego at the end of the Second World War.

The Lynx went into mothballs at Bremerton, Wash. About that time the Hancock sailed into San Francisco Bay. He was transferred to the carrier that headed back to sea once more.

“We sailed back to Pearl Harbor, picked up an airplane and a boat load of Marines who were on their way back to the States,” he said. “In 1946 I was discharged from the Navy and went into the active Naval Reserve for a few years.”

In civilian life Moore went to work for Bethlehem Steel Co. for 18 years in its plant in La Porte, Ind. He became the general foreman in charge of construction at the steel plant.

Then he  worked for Georgia Power Co. helping to build a nuclear power plant outside Augusta in the 1960s. He worked for the firm for the next 25 years until he retired at 62 from the company in 1987.

He and his wife, Eloise, moved to Tangerine Woods in Englewood that same year. The couple has two daughters and a son: Gail, Judy, and Garry.

This story was first published in the Charlotte Sun newspaper, Port Charlotte, Fla. on Wednesday, May 21, 2014 and is republished with permission.