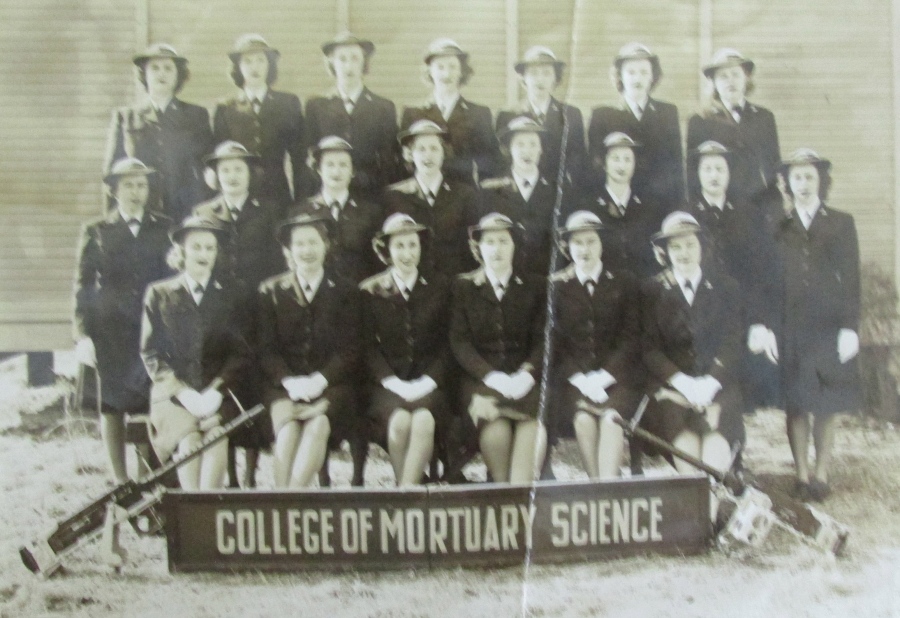 Scherf was one of the first graduates of the "College of Mortuary Science" at Pensacola Naval Air Station. She is the last WAVE at the far right in the second row standing. With their .50 caliber machine-guns they were considered killers. Photo provided

She was nominated to be “Miss Naval Air Gunnery School,” but wasn’t chosen she remembered with a frown a lifetime later. Photo provided

In 1943 Ida Scherf was a Maine school teacher when she made a commitment to the war effort. She joined the WAVES, Women Accepted for Volunteer Emergency Service. The 23-year-old school teacher was part of the first graduating class of women trained by the Navy to teach men aerial gunnery–how to shoot a .50 caliber machine-gun from a fighter or bomber in World War II.

After basic and a battery of tests at Hunter College in Bronx, N.Y., she and a group of young women found themselves at Pensacola Naval Air Station learning about the .50 cal. Following eight weeks of intense training the newly-minted petty officers graduated from the “College of Mortuary Science” –a spoof on the killing ability of the Browning machine-gun– and were sent to a Navy base in Hollywood, Fla. where they plied their new trade.

“We were the first WAVES at the base in Hollywood to wear the ‘G’ patch on our shoulder, signifying we were gunnery officers,” the 94-year-old Tangerine Woods resident, who has lived in Englewood, Fla. for the past three decades, said.

She was clowning around in Navy dress with a cap that was out of uniform and didn’t belong with her outfit. Photo provided

During their preliminary training on .50 cal. machine-guns in Pensacola the women were put through their paces. They learned how to tear the heavy guns down and put them back together again, they learned how they worked and they got behind the massive guns and gave them a try.

“We didn’t do a lot of shooting with the guns at Pensacola. Most of our time was taken up with classroom work. We had teachers who brought in a couple of 35-millimeter projectors and put a moving image on the screen of a fighter plane flying toward us with its guns blazing away. We had simulated .50 caliber guns we pointed at the approaching fighter and tried to shoot it down. Somehow or other they were able to determine how well we did with the simulated gun we pointed at the approaching enemy fighter.

“We shot a few .50 caliber rounds at a target at the range. Then they took us up in the backseat of a fighter plane one time. Each of us got to strafe a simulated enemy ship in the Gulf off Pensacola,” Scherf recalled.

In two months they completed the gunnery course at the naval air station. Following graduation as 3rd Class Petty Officer at Pensacola they all became gunnery officers.

“We were shipped to Hollywood and began training Marines and Sailors the finer points of using a .50 caliber machine-gun. With 20 guys in each of our classes I don’t recall we had any problems,” she said 70 years later.

The war was still going on when she met her husband, Robert. He was a Navy chief and a physical therapist trained at the Mayo Clinic before the war.

Petty Officer 1st Class Ida Scherf back home in Maine during World War II. She taught marines and sailors how to shot a .50 caliber machine-gun as an aerial gunner during the war. Photo provided

“I went out on a blind date with my future husband together with my roommate and her date. We had a few more dates before the end of the war, but mostly he was off somewhere else in the Navy,” Scherf said.

“On VJ-Day (Victory over Japan) I was on leave visiting my folks up in Maine. Just by chance, Robert came up to visit me. We were out salmon fishing with my dad. We heard the church bells tolling the end of World War II as we returned to the dock,” she recalled with a smile.

The couple got married in February 1946 after they had both been discharged from the Navy. “Robert got a job as the chief physical therapist at the hospital in Hartford, Conn., a position he held until he retired 34 years later,” she said. “I became a housewife with three children to raise.

“After the children were school age I went back to substitute teaching for a number of years. Then I switched jobs and spent my last eight or 10 years working as an insurance adjuster and supervisor.

In 1987 the couple moved to Englewood. She has lived in Tangerine Woods for the past 27 years. Their three grown children are Janet, Wendy and Robert.

This story was first published in the Charlotte Sun newspaper, Port Charlotte, Fla. on Monday, June 9, 2014 and is republished with permission.