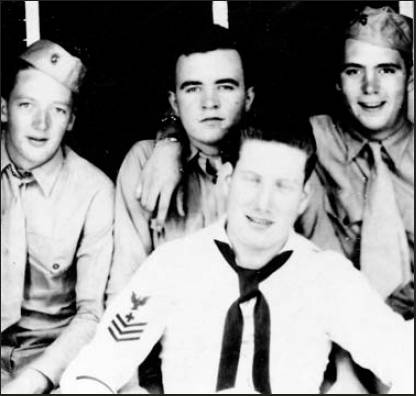 Former Marine Cpl. Walter O’Malley, at the left, is the only surviving member of the group who had their photo taken while in Hawaii during World War II. In the foreground is the company corpsman whose name he can no longer recall. Beside him is Tom Coughlin and Milo Urdeich, two Marine buddies who survived the war.     Photo provided

Cpl. Walter O’Malley was a 19-year-old Browning Automatic Rifleman in the first wave of Marines who came ashore on Iwo Jima on Feb. 19, 1945. His war ended six days later when he was struck in the leg and arm by two pieces of shrapnel from an enemy mortar.

“We were told, while still at sea, we were going to land near the base of Suribachi on Iwo. By the time we arrived offshore on Feb. 19, they’d been shelling and bombing the island for three days,” the 81-year-old Englewood, Fla. resident recalled. “Gen. (H. M.) ‘Howling Mad’ Smith, our commanding officer, thought they should have bombarded the island another five days before we went ashore.

“At 9 a.m., we hit the beach. There wasn’t much enemy fire. It had been suppressed by our naval guns and planes dropping napalm,” he said. “The Alligator we were riding in was going to take us onto the beach 100 yards or more. It didn’t make it ashore 20 feet when it got stuck in the black volcanic sand.”

O’Malley and the other 15 Marines aboard the landing craft jumped off their stuck vehicle and were immediately mired down in the black sand, too. They had to crawl their way off the beach on their bellies. Lack of vegetation and any concealment made Iwo Jima even more deadly for the invaders.

“Almost half an hour after we landed, when the fifth wave was coming ashore, the enemy opened up on us with machine guns, mortars and artillery fire,” O’Malley said. “By this time, I was passed the second sand mound, possibly 200 yards from the water, in a big shell hole. An enemy machine gun on Suribachi was traversing our whole area.”

Their unit’s objective: Capture the far shore on the other side of the island. It was the narrowest part of Iwo Jima, possibly 600 yards from shore to shore. They fought all day against an enemy they couldn’t see who was hidden in caves and protected by pill boxes and bunkers providing the defenders immense fire power.

“We had been ashore an hour or so when a kid in the 28th Regiment next to us got killed. The kid was screaming ‘rags,’ the code name for medic,” he said. “A corpsman jumps in the foxhole with the injured Marine. A moment later, an enemy artillery shell made a direct hit on them as arms and legs flew in all directions.”

It was O’Malley’s first experience with death under enemy fire. As he retold the tale more than 60 years later, his eyes welled up with tears.

It was some time in the afternoon of the first day when their unit finally reached the far shore of the enemy-held island. They turned right up the beach toward the first airstrip on the lower end of Iwo Jima, another objective for the “leathernecks.”

“We had just crawled over a couple of small shell ridges when a fellow named O’Conner, near me, was hit by enemy machine gun fire. He took three slugs in the chest and fell backwards,” O’Malley said. “We dropped back to the second ridge for cover and waited. A Marine with a flamethrower and another guy with a C-2 explosive pack came up and and attacked the Japs on the other side of the far ridge who were firing at us.

“The guy with the flamethrower opened up on the pill box while the other fellow tossed his C-2 explosive pack toward the enemy machine gun. After it exploded we charged. There was little left of the three Japs in the pill box.”

Days were short, it was mid-February. O’Malley and the other 5th Division Marines had been fighting for seven hours on that 8-square mile island of death. After silencing the machine gun emplacement, they didn’t advance much further that first day.

“The Japs never ran out of shells. They were firing at us day and night. We fired flares all night so the enemy couldn’t infiltrate our lines in the dark,” he said. “All I remember is artillery fire all the time. After the third night without sleep I couldn’t keep my eyes open.”

The next couple of days the fighting was even more deadly. The 2nd Battalion had a hard time advancing 100 yards s day because of the fierce enemy fire.

“I remember the fourth day when they raised the flag on Suribachi. We weren’t 500 yards away when the flag went up. I don’t think we noticed it until our ships offshore began blowing their whistles,” he said. “We celebrated. We thought the battle was over. What a rude awakening. The battle and the killing would continue for more than a month.

“On the fifth day we were ordered to pull back because we were out in no-man’s-land. Two of our tanks weren’t able to withdraw because they lost their traction in the sand,” he said. “The tankers were captured by the Japs. We could hear them screaming all night long as they were being killed by the enemy.”

By day six, O’Malley’s outfit reached “Death Valley.” This was an area of natural rock formations north of Suribachi a few hundred yards. It was protected by enemy fortified caves, pill boxes and block houses. They were taking in-coming fire from all directions.

“We made a big attack and got pinned down by enemy fire. Seven of the members of our squad were wounded during that attack — our lieutenant, our platoon sergeant, our corporal and I were four of the seven,” he said. “A mortar round hit in front of me, a second round fell behind me and the third one shattered the stock of my BAR (Browning Automatic Rifle) beside my head. I was fortunate because the blast only hit the stock of my BAR, my leg and forearm.”

O’Malley was able to crawl back under fire and make contact with a Marine unit behind them. A corpsman patched him up. He was evacuated by Jeep to the beach and a waiting Higgins Boat. The wounded corporal was taken to a hospital ship offshore in the landing craft. A few days later O’Malley was recovering in an Army hospital on Saipan. After a week’s recuperation, he was transferred to a Naval hospital at Pearl Harbor, Hawaii.

A couple of months later, the teenage Marine returned to the 5th Marine Division. He never saw combat again.

“In our platoon, by March 9 more than two weeks before the end of the battle, there were only four Marines out of 50 that hadn’t been wounded or killed on Iwo Jima,” O’Malley said. He showed me the little black bump on the inside of his left forearm.

“That’s Iwo Jima sand I’ve carried with me all these years,” he said proudly.

During the 36-day battle for Iwo Jima, in the closing months of World War II, 6,825 American servicemen, mostly Marines, lost their lives on that eight-square-mile island and 19,189 more Americans servicemen were wounded.

Some 1,083 of the 22,000 Japanese defenders of the tiny volcanic island survived the assault by American forces. The rest were killed.

This was the only battle during WWII where there were more American casualties than Japanese.

The tiny Pacific island was important to the allies because of its two strategically placed airstrips.

This story was first published in the Charlotte Sun newspaper, Port Charlotte, Florida on Monday, Feb. 19, 2007 and is republished with permission.