Dick Honyak walked into the Charlotte Sun newspaper office in Englewood, Fla. six years ago and dropped a big, thick, loose leaf notebook full of 8 by 10 black and white photographs on my desk. The historic photos were of the Marines taking Iwo Jima from the Japanese at the close of World War II.

Sgt. Lou Lowery shot the pictures 65 years ago for Leatherneck, the Corps’ national magazine. He was the Marine photographer who photographed the first flag raising atop Mount Suribachi on Feb. 23, 1945, four days after the Marines landed on the black volcanic sands of the tiny Pacific island.

This is Marine photographer Lou Lowery’s picture of the first flag-raising. In the foreground holding a carbine is Pfc. James Michels and standing behind him is Cpl. Charles Lindberg. Sgt. Hank Hansen holds the flag pole on the left and behind him is Pfc. Ray Jacobs, with a radio on his back. Holding the flag on the right is Pvt. Phil Ward. Beside him, talking on the radio with his side to the camera, is Lt. Harold Schrier  Photo provided by Dick Honyak

Iwo Jima was an eight-square-mile island, 700 miles from the Japanese home islands with two enemy-built runways. Those airstrips were what made the place important to Allied forces.

Once taken, the runways on Iwo would be used as emergency landing strips by thousands of B-29 “Superfortress” crippled during bombing raids on Japan. Air Corp figures show 2,800 B-29s made emergency landings there during the closing months of the war. The fields saved the lives of 28,000 airmen who would have otherwise crashed into the sea and probably been lost.

The first flag-raising patrol heads up the side of Suribachi at 9:45 a.m. They were part of Easy Company, 2nd Battalion, 28th Regiment, 5th Marine Division who landed on Iwo Jima. Photo provided by Dick Honyak

American Marines and Sailors paid a staggering price for the volcanic island. Some 6,800 were killed or missing and 12,000 more were wounded during the 36 day battle. Almost all of the 22,000 Japanese defenders were wiped out.

To understand how intense the fighting was on that tiny Pacific island during the five-week battle, 27 Marines were awarded Medals of Honor. At no other time in the Corps’ 236 year history have so many of the nation’s highest award for heroism been presented to Marines in a single battle.

Three of the Marines involved in putting up the first American flag on Suribachi get it ready to fly. Tying the line to the flagpole is Lt. Harold Schrier, Sgt.Ernest Thomas is in the middle, and Cpl. Charles Lindberg on the right. Photo provided by Dick Honyak

What many people don’t know about the Battle of Iwo Jima is that two American flags were put up on Suribachi within hours of each other by members of the 5th Marine Division.

Lowery took the lesser-known picture of the first flag going up on the hill. Joe Rosenthal shot the Associate Press photo almost everyone has seen over the last six decades. It’s supposed to be the most reproduced picture of WW II.

A Marine takes aim at the enemy while in the background below LSTs (Landing Ships) deposit more “Leathernecks” on the black-sandy beach of Iwo Jima. Photo provided by Dick Honyak

Honyak had both of these shots and 75 more of Lowery’s battle picture in his loose leaf binder. He got them from a Marine Corps buddy who became friendly with the the photographer after the war. Through his friend, Honyak, got to know Chuck Lindberg, the sole survivor of the six-man squad that raised the first American flag over Suribachi.

Lindberg served in Assault Section 3rd Platoon, Easy Company, 2nd Battalion, 28th Regiment, 5th Marine Division. He carried a flamethrower with two tanks of napalm on his back during the battle.

“If you’re going to write a story about the Battle of Iwo Jima and use these pictures, Lindberg wants you to call him before you start typing,” Honyak explained to me. I called.

A rosary hangs from the wooden cross making the grave of Marine Gunnery Sgt. John Basilone at Iwo Jima. He had received the Medal of Honor at Guadalcanal and was one of the 6,800 Americans killed on the 8-square-mile island. Another 12,400 Americans were wounded in the 36-day battle. Some 20,000 Japanese defenders lost their lives. Photo provided by Dick Honyak

“Even though our flag was the first American flag to fly over the Japanese home territory in World War II, when I first started talking publicly about it in the 1970s I was called a liar and everything else,” Lindberg said. “Over the years I’ve straightened out a lot of people about the two flags that were raise that day on Iwo Jima.”

Even so, he still smarts from the rebuffs he and his buddies, who raised the first flag on Iwo, received. Two presidents even snubbed them. It happened more than a half century ago.

“When the Marine Corps monument was dedicated in ’54 at Arlington, Lt. (Harold) Schrier and I were invited to attend the dedication ceremony,” Lindberg said. “We weren’t even recognized and they put us way back in the corner. The other three guys, who took part in the second flag raising, were up front with President Eisenhower and Vice President Nixon.”

When asked half a dozen years ago, shortly before his death, how he felt about the snubs the 83-year-old Leatherneck  said, “It’s one of those things. What can you do? I always tell people, ‘If it hadn’t been for us and the first flag, there wouldn’t have been a second flag raised on Iwo Jima.'” Lindberg and the other five members of the first flag-raising detachment had been ordered by Lt. Col. Chandler Johnston, their battalion commander, to go up the hill at 9:45 a.m. on the 23rd and raise an American flag.

“Forty members of the 3rd Platoon headed up the mountain with the first flag,” Lindberg recalled. “I thought it would be a slaughterhouse because of all the trouble we’d had getting to the base of the mountain.”

The first flag went up at 10:30 a.m.The flag raisers faced little enemy resistance on the way up. A member of their platoon found a half-buried piece of steel water pipe on top of Suribachi to use as a flag staff. Lt. Harold Schrier, Plt. Sgt. Ernest Thomas and Cpl. Lindberg attached the flag to the pipe.

Immediately after the flag was raised ships off shore began tooting their whistles in celebration. Marines were dancing in their foxholes on the beach. As one said decades later, “We thought we’d won and the battle was over. In reality it was just getting started.”

At the moment the flag went up, Secretary of the Navy James Forestall, was watching off shore aboard ship. He got caught up in the revelry of the historic event.

He asked to be given the flag as a battle memento. Lt. Col. Johnston got wind of the Navy secretary’s flag request. He decided to keep the first flag for the 5th Marine Division because of its historical significance. That’s when the battalion commander ordered a second larger flag be put up and the first one returned to him, or so the story goes. Ironically, Johnston was killed by an enemy artillery round a couple of days later.

Lowery was coming down the mountain when he passed Rosenthal, the AP photographer, headed up the hill. The Leatherneck photographer told his cohort he had taken a number of pictures of the first flag raising.

This is Joe Rosenthal’s Pulitzer Prize-winning Associated Press picture that ran in scores of newspapers around the United States before the battle was over. It is said to be the most reproduced photograph of World War II. Photo provided

Rosenthal wasn’t deterred. He went up Suribachi hoping he would take a picture of something worth publishing in newspapers back home in the States.

He and Sgt. Bill Genaust, the 5th Marine Division movie cameraman, were sitting at the top of the hill about 12:30 p.m. not paying much attention to the second group of flag raisers. At the moment “Old Glory” went up for the second time Genaust caught a glimpse of it out of the corner of his eye and yelled to Rosenthal. The AP photographer swung around with his still camera and snapped a picture without focusing.

The wire photographer never saw what he photographed that afternoon until his pictures started appearing in daily newspapers throughout the country. It became a photographic sensation back in the USA.

After the war some said Rosenthal had staged the second flag-raising. His critics apparently got this idea because the AP photographer also shot several pictures of jubilant Marines who wanted their picture taken with the American flag flying atop Suribachi. Rosenthal accommodated the “Leathernecks” and sent these negatives along with his award-winning flag-raising photo to be developed.

Meanwhile, Lowery’s photo of the first flag-raising, the one Lindberg is in, was shelved by the Marine Corps, according to Col. Walt Ford, editor of Leatherneck. He said the Corps used Rosenthal’s photo immediately after it became available.  An AP spokesman told the Corps it was welcome to use their photograph, however, the wire service wanted the Marines to pay them each time it was used.

That didn’t go down well with the Marine Corps Commandant. He let it be known the Corps would use a frame from the movie footage Genaust took.

The AP didn’t like the idea of going to war with the United States Marine Corps over a photograph, so it cut a deal. AP would allow the Marines to use Rosenthal’s pictured of the second flag raising for free if it would keep Lowery’s picture under wraps until war’s end.

It wasn’t until 1947, the colonel explained, that Lowery’s flag-raising photo was finally published in the the Marine Corps’ magazine along with 15 other pictures he took on Iwo Jima during the battle, some of which are shown here. Accompanying the photographs was a lengthy story written by Bill Miller detailing the fate of the Marines involved in the first flag-raising.

A carbine-carrying Marine places a cigarette between the lips of a half-buried Japanese Marine while a couple of buddies watch. Photo provided by Dick Honyak

Marines tend to a Japanese soldier wounded on Iwo Jima. He is one of the very few who survived the 36-day battle. Photo provided by Dick Honyak

Cpl. Charles Lindberg carried a flamethrower. He was one of the Marines who raised the first American flag over the historic Iwo Jima battlefield. Years later he was still unhappy about the lack of recognition the first flag-raisers received for their efforts. Photo provided by Dick Honyak

* Most of the Marines who fought on Iwo Jima know about the first flag-raising because they saw it go up and heard the ships’ whistles and bells when it happened. They cheered.

* Those Marines fighting on the island knew little or nothing about the second flag-raising. It was only a replacement flag put up hours later.

* People back in the States only know about the second flag-raising. It was the picture that received all the newspaper publicity. Nothing was said publicly about the first flag until a couple of years after the Second World War.

* Chuck Lindberg, the Marine with the flamethrower pictured standing behind his buddy with the carbine in the first picture, was the last surviving member of the 12 servicemen who raised both flags.

* Both flags are on display at the National Marine Corps Museum in Quantico, Va. 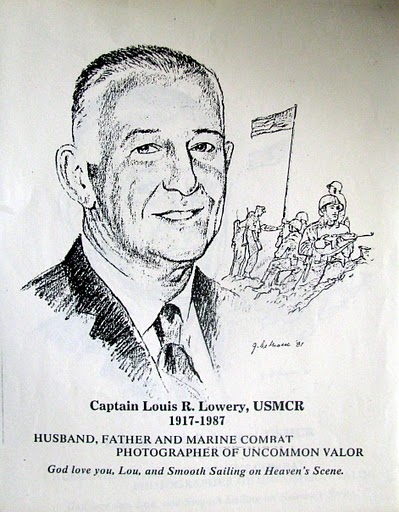