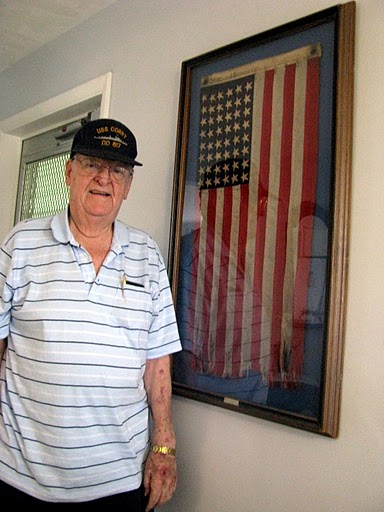 Thomas McLean is pictured beside an American flag kept in a place of honor on the wall of his Harbor Heights, Fla. home. The flag flew from the stern of Sub Chaser 664, one of the ships he served on during World War II. Sun photo by Don Moore

“We left Pearl and headed for Eniwetok and from there to Ulithi Atoll. We escorted a convoy of ships to Okinawa right in the middle of the battle for for the island,” the 89-year-old former sailor from Harbor Heights, Fla. recalled. “Our job was to bring frogmen and marines to the beach.

“We were ordered to get as close to the beach as possible so Japanese gunners would fire at us and disclose their positions to our artillery spotters.” McLean said. “We were so close I remember seeing Japanese civilians jumping to their deaths off the cliffs rather than surrender to Americans.

“I also remember the kamikazes at Okinawa. They would come in so low we could see the pilots. One of these suicide pilots was aiming for us, but hit a seagoing tug beside us. The tug went down. We picked up a few survivors, but not many,” he said. 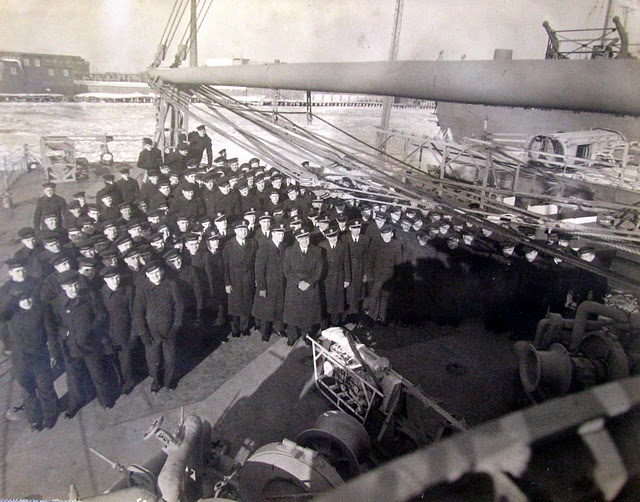 Ship’s company is pictured on the bow of the USS Tollberg before she left for the Pacific war at the end of World War II. McLean is one of the sea of faces in the shot. Photo provided

“Shortly after the war’s end we went through a real bad typhoon in the China Sea. It was so bad we’d walk with one foot on the deck and one on the bulkhead,” McLean explained. “I have to give the cooks aboard the Tollberg credit. They always had a pot of coffee and sandwiches for us no matter how bad the weather got.”

The voyage home was a memorable one for the sailors aboard the Tollberg. After going through the Panama Canal they sailed up the Atlantic to Norfolk, Va., their home port, and on to New York to celebrate.

“In New York Harbor all the fire boats were lined up to welcome us back. We spent a week up there celebrating,” he said. “Then we sailed for Green Cove Springs, outside Jacksonville, to put the ship in the mothball fleet there. Eventually the Tollberg was given to the Turkish or Greek navy.”

This is a copy of the program for the launching of the USS Tollberg late in World War II. McLean went to Okinawa aboard her as an electrician’s mate. Photo provided

After the Tollberg, McLean still had three years to serve in the Navy. He enlisted for a six year hitch.

“I went aboard the destroyer USS Corry, DD-817, in Pensacola just in time for a European tour. He stayed aboard the ship until he was discharge from the Navy in November 1948.

Shortly after the Japanese attacked Pearl Harbor McLean went in the U.S. Merchant Marines. He made one trip aboard a transport ship along the east coast of the U.S. Then he signed up for the Navy.

After attending Naval Mine Sweeping School in Virginia he was sent aboard a 130-foot wooden mine sweeper. After he got off that boat it was dispatched to the Pacific where it hit a mine and the skipper beached it.

McLean’s next boat was a 110-foot wooden sub chaser. Following an Atlantic cruse looking for German submarines their boat was sent to Annapolis, Md. on a secret mission.

“We took a couple of civilians aboard who brought sub-machine guns. We later found out they were Secret Service agents,” he said. “We had no idea what was going on until the next morning where we rendezvoused with the USS Quincy. She was an old WW I heavy cruiser.

“Our boat was providing security for FDR (President Franklin D. Roosevelt) who was about to go aboard the cruiser for a trip to Yalta. The president would meet Churchill and Stalin at the Yalta Conference,” McLean said.

“I wanted to see a little more action. I’d joined the Navy to see the world,” the old sailor explained. “That’s when I got a transfer to APD-103, the USS Tollberg.” 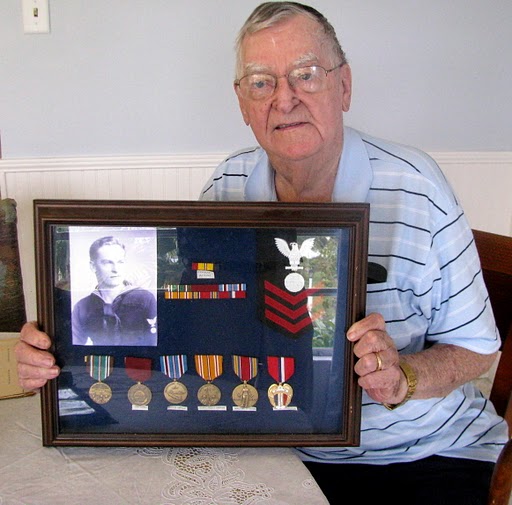 McLean is pictured with his Electrician’s Mate Crow and Stripes, a picture of himself as a young sailor and a box full of medals. Sun photo by Don Moore

The ship’s main purpose was to deposit frogmen along the beaches of Japanese-held Pacific Islands. McLean and the sailors aboard the Tollberg only got one crack at it during the biggest battle in the Pacific in World War II–Okinawa.

After the war he worked for Bell Telephone for 30 years as a design engineer. Following his retirement from Bell he went to work for the Puerto Rican Telephone Co. and after that he worked in Saudi Arabia putting in phone systems for six years.

He and his wife, Linda, retired to Port Charlotte in 1983. They have four children: Robert, Linda, Marsha and Thomas (deceased).

This story was first printed in the Charlotte Sun newspaper, Port Charlotte, Florida on . It is republished with permission.

This story was first published in the Charlotte Sun newspaper, Port Charlotte, Fla. on Friday, Feb. 11, 2011 and is republished with permission.