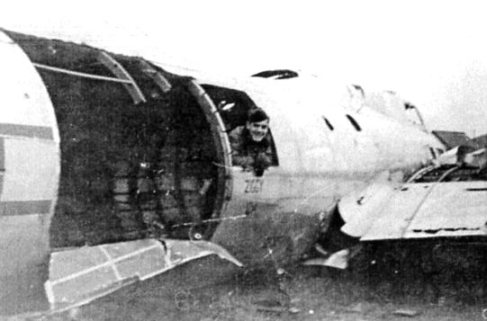 Waist Gunner Bob McCullough pokes his head out the gaping hole in the side of the same B-17 bomber T/Sgt. Howard Dillingham of Port Charlotte, Fla. flew in during World War II. Photo provided

It was the railroad yard at Mannheim, Germany that was almost T/Sgt. Howard W. Dillingham’s and the other seven members of his B-17 bomber crew’s undoing.

The five lines of penciled notes written nearly 60 years ago doesn’t do justice to his World War II tale. The ” Flying Fortress” flight engineer and upper-turret gunner wrote of his third mission over Nazi-occupied Germany:

“There were some 200 B-17 bombers on the flight to Mannheim with us that day. Almost every day the 8th Air Force put up 1,000 bombers to hit four or five targets,” said Dillingham, now 80. “When we reached the railroad marshaling yard that day, the flak from German 88s (anti-aircraft guns) was very heavy. We lost our two engines on the right side to flak while over the target.”

Almost immediately their bomber started losing altitude for lack of power. It was also lagging behind the bomber squadron because it couldn’t maintain its air speed.

To compensate for lack of power, lack of speed and lack of altitude, he and his crew began chucking out everything that wasn’t nailed down. They were discarding stuff before they got out of Germany. By the time the bomber reached the English Channel, the plane was bare of unneeded equipment.

“Our .50-caliber machine guns went, and so did all the ammunition for them. We were lucky because there were almost no German fighters in the air by that time in the war,” Dillingham said. “We threw out our steel helmets and our flak suits.

“What was really concerning me was the high octane gasoline we still had aboard. A couple of weeks before, a B-17 in our squadron crash-landed and exploded because of the gas aboard,” he said. “I told the pilot and we began dumping our extra fuel over the channel.”

By then they were approaching the White Cliffs of Dover. They could see below them the carcasses of a number of other distressed airplanes that failed to maintain their altitude and never made it back. Their crews died when they crashed into the chalky-white cliffs.

“We were holding our altitude now because we had thrown out all that stuff on the way back. We were gonna make it,” the Port Charlotte snowbird said smiling.

When they reached their base at Sudbury, England their whole squadron had already landed.

“There were a couple of hundred guys on the ground waiting for us to land. Ambulances and fire trucks were parked along the runway, too. “We came in right over the farmhouse at the end of the runway. Both our starboard engines were out. Most of our tail section was shot away and both our wheels were also gone. There was a hole in the waist big enough for two men to walk through,” Dillingham said.

All the while he stood behind the pilot and co-pilot calling out air speed and other instrument readings to them The rest of the crew was sitting on the radio room floor, the most secure part of the plane, holding on for dear life.

At the controls was 1st Lt. Charles Martin from Tennessee, a cool 20-year-old pilot, who maintained the 115 mph air speed needed to keep the heavy, four-engine bomber flying until it was over the runway. Then he let it gently settle to the concrete.

When the props on the two port side engines hit the runway they abruptly stopped and bent up under the engines. Sparks flew from the underbelly of the bomber as it scraped along the concrete at more than 90 mph. Eventually the “Flying Fortress” stopped just about the time it used up the length of the runway. The crew jumped out the rear door of the B-17 and ran as fast as they could to get away from the bomber because of the danger of an explosion.

There was no fire and no explosion. The B-17 just sat crumpled and badly damaged at the end of the runway. Squadron members who watched from the sidelines must have been amazed at the crew’s good fortune.

Not a single member of the eight-man crew received a scratch on that flight. It was a miracle as far as Dillingham was concerned.

Normally a B-17 flies with a crew of 10. On this flight they only had one waist gunner instead of two and the ball turret gunner on the bottom of the plane had been replaced by a radar unit. 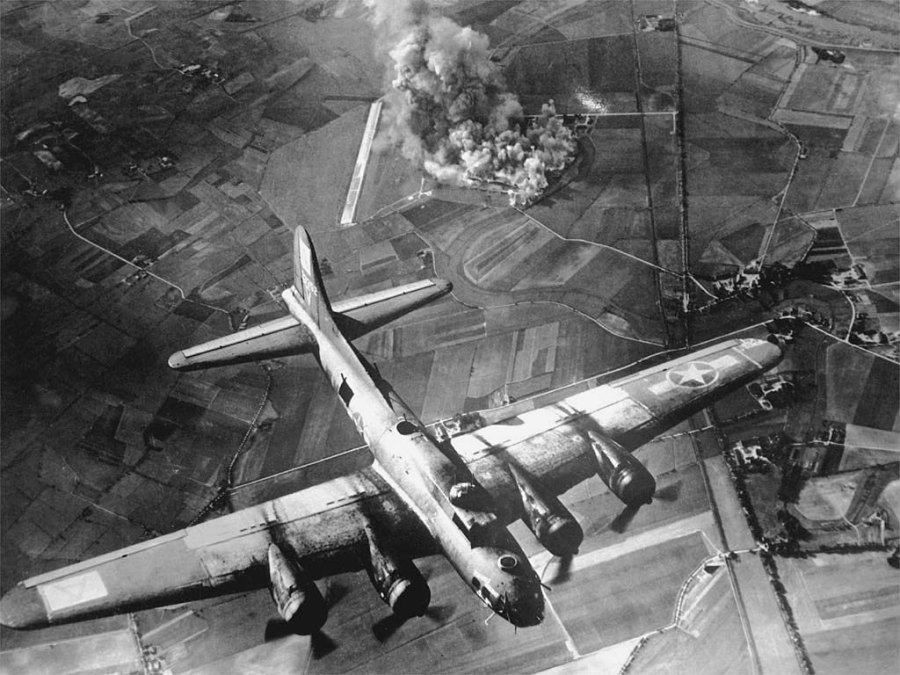 An American B-17 bomber has the Third Reich in its sites during a mission over Germany during World War II. Army Air Corps photo

A little more than a month later, while bombing Osha Buren, Germany, Dillingham wouldn’t be as lucky as he had been during the Mannheim raid.

“We were to bomb the railroad marshaling yard at Osha Buren. The Germans had a lot of guns all around the yard,” he said. “We were taking a lot of flak. All of a sudden there was a flash of light that blew out my upper turret and blinded me. I couldn’t see anything. Everything went black.

“Below my turret was a round, armored plate that I stood on while firing. After I was hit I sat down on the plate in total darkness,” Dillingham said. “I was a pretty sad guy. I was thinking about the fact that my mother and father would have to take care of me for the rest of their lives.”

They were flying at 28,000 feet, almost six miles high, in 55-below zero conditions. It was so cold in the plane that the crew wore silk gloves so their hands didn’t touch any metal parts and stick.

The other members of the crew didn’t realize Dillingham had been injured by flak from an enemy 88 shell until they landed back at base. Because the flight wasn’t attacked by German fighters, they didn’t systematically check by radio to make sure all members of the crew were OK while in flight.

“I don’t know how long I sat there on the armored plate. It could have been a couple of hours because the flight was four hours one way. At some point something came over me. It was like someone touched me. For some reason, I knew I was going to see again,” he said.

When he reached the hospital, doctors worked on his eyes. Apparently tiny slivers of plexiglass from his cockpit canopy had struck him in the eyes when it was hit.

They bandaged both his eyes and Dillingham spent the next week or so in the hospital recovering. When they removed the bandages he could see again–sort of.

“I could see some light and distinguish members of the crew even though things were fuzzy,” he said. “It probably took another 10 days for two weeks for the fuzziness to go away.”

Dillingham was back flying with his crew after missing only a couple of missions. He would complete 23 of the obligatory 25 missions before war’s end.

During five months of bombing operations the crew of his B-17 remained together. They bombed Schnecken, Aboltion, Mannheim, Chemnitz, Bremen, Frankfurt, Dontmuno, Oshabruen, Holzwickede, Varel, Bordeaux, Dresden, Plauen and Pirna.

After 33 years as a troubleshooter for the Long Island Light Co. and living in Riverhead, Long Island, N.Y., Dillingham started vacationing in Florida during the winter decades ago. For the past five years, he and his wife have spent their winters at Riverside RV Park off Kings Highway in Port Charlotte.

Just by chance several years ago he built a dollhouse in his basement workshop up north. The dollhouse was auctioned off for charity and he appeared in the local papers with his creation. As a consequence, a bunch of women donated unfinished dollhouses to him that their late husbands didn’t complete.

For the pasty two years, Dillingham has worked on them. When he finishes the dollhouses he give them to orphanages or hospitals. He’s give five away so far.

He is currently working on one for an area hospital. He will give it away before he heads home this spring. 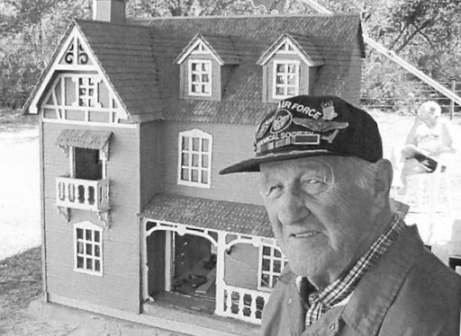 Howard Dillingham makes dollhouses he gives away. This house he is refurbishing will be donated to an area hospital before he goes back north in the spring. Sun photo by Don Moore

“I’ll be 105 by the time I finish all these dollhouses,” he said with a chuckle. “It’s what keeps me going at my age.”

This story was first published in the Charlotte Sun newspaper, Port Charlotte, Fla. on Sunday, Feb. 23, 2003 and is republished with permission.

Born in Brooklyn on May 8, 1922, to Robert and Constance (Berthold) Dillingham, he attended Andrew Jackson High School. He served in the U.S. Army Air Force during World War II as a technical sergeant and flight engineer. He was also a ball turret gunner on a B-17 and received two Purple Hearts.

He married Katharine Holzer of Queens Village on May 21, 1949, and they moved to the North Fork.

Mr. Dillingham worked as a systems operator for the Long Island Lighting Company. A master electrician, he also owned and operated his own electrical business on the North Fork.

He was an active member of Mattituck Presbyterian Church, serving as both a deacon and an elder. According to family members, he was a Little League coach for his sons and also an avid golfer. For many years he made dollhouses and donated them to charitable organizations for fundraising purposes.

Predeceased by his wife and his brothers Ralph and George, Mr. Dillingham is survived by his sons Howard Jr., of Laurel, Paul, of Windsor, N.Y., and Wayne and Drew, both of Riverhead; a brother, Robert, of Aquebogue; and six grandchildren.

Funeral arrangements, incomplete at presstime, are being handled by Defriest-Grattan Funeral Home in Mattituck.