John Salvani is pictured with his younger brother, Geno, who served aboard am LST (Landing Ship Tank) in the Pacific during World War II. The picture was taken in front of their parents’ Detroit, Mich. home. Photo provided

John Silvani grew up in an Italian neighborhood in Detroit, Mich., graduated from high school about the time World War II began and went to work at the Ford plant in Dearborn as a teenage tool-and-die maker after receiving a military deferment.

“In 1943 I lost my deferment and was drafted into the Army. After basic at Fort Hood, Texas I ended up on a .90 mm main gun and alternate driver of a tank destroyer. We were attached to the 4th Infantry Division, part of Gen. Omar Bradley’s 1st. Army. Our unit arrived in Liverpool, England in January 1943,” the 89-year-old Venice, Fla. resident said.

“From Liverpool we went to Cardiff, Wales where we slept in pup tents on a hill overlooking the English Channel,” Silvani explained. “We could see the armada forming in the channel for the coming attack on the Germans.

“We knew the invasion was coming because all the roads were filled with more and more, trucks, ammunition, tanks, command cars and soldiers. It kept getting bigger and bigger in the area we were in.

“Our tank destroyer was equipped with the .90 mm gun that was big enough to knock out a German tank. It also had a .30 cal. machine-gun on top. Our unit’s motto was: ‘Seek out, destroy and get the hell out of there.’  We were lightly armored and we weren’t meant to fight a battle with a German tank.

“All of a sudden we started to see the military equipment being taken off the streets where it had been lined up for months and put aboard ships in the harbor,” he explained. “We began wondering what was going to happen to us. We found out when they put us aboard ships for the ride across the channel. The ship that took us there was called ‘The Isle of Mann.’

While at Fort Custer in Battle Creek Mich. John Silvani and members of his outfit pose for a group picture. He’s the soldier fourth from the left in the back row. Photo provided

“By the time we went into Omaha Beach on D-Day plus 3 the 82 and 101st Airborne had already jumped behind German lines. A bunch of American soldiers hit Omaha Beach before us.

“The Germans were still shooting at us. There were dead Americans all over the place. It was messy,” he said. “We jumped off the landing craft into chest-deep water and had to negotiate the steel obstacles and mines the Germans put in the water to stop the landing craft.

“We were all trying to make it to a small embankment of sand at the water line where we could hide behind and get out of  enemy fire. They were shooting at us with machine-guns, rifles and .88s (cannons) as we bunched up behind this sand embankment.

“A lot of people were wounded and dying on the beach where I was. We had to get out of there.

“By then the Army had cleared paths across the beach to the base of the 100-foot cliffs the Germans were dug into and held as they fired down on us on the beach in front of them.

“It took us most of the day to reach the cliffs. It was probably a couple of days later before we scaled the cliffs and gained control of the top. By then our airborne troops were attacking the Germans on the cliffs from the rear and relieving some of the pressure on us,” Silvani said.

“When we reached the top we congregated in our various units waiting for orders. Our first objective was Sainte-Mère-Église (a little French town several miles inland). Rolling fire was called for and the artillery provided a barrage that preceded our infantry moving forward. 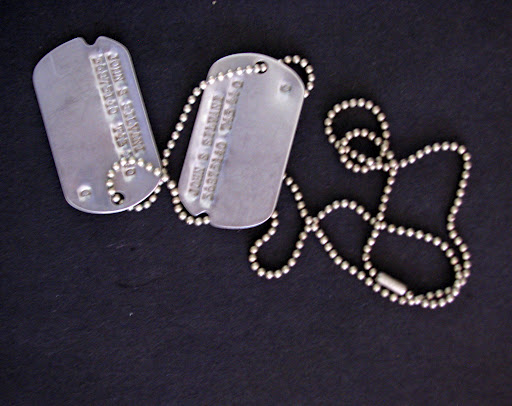 These are the dog tags Silvani wore during the two years he served in Bradley’s 1st Army in Europe d in World War II. Sun photo by Don Moore

“Because we had not encountered any German tanks at this point, our tank killer’s 90 mm gun was used as an artillery piece that supported the infantry as it moved forward. By the time we reached Sainte-Mère-Église our paratroopers had already captured the town from the Germans.”

Silvani and his outfit continued to advance through one little French village after another in the Hedgerow Country along the Norman coast of France as the German’s began to dislodge and fell back mile by mile.

“We saw few French residents. Most of them were in hiding in the hills. The Germans had also withdrawn their tanks. The only enemy tanks we saw were on high ground in front of us shooting our way. We had trouble getting to them.”

Allied forces made a lateral move toward the Cherbourg Peninsula and the Port of Cherbourg. The hundreds of Allied ships off the Normandy Coast needed a secure port to unload cargo of fighting men and equipment that was being poured into the huge battle that was force its way into Hitler’s “Fortress Europe.”

“After we took the Port of Cherbourg I was taken out of my tank destroyer and put into an artillery reconnaissance unit for the advance on St. Lo. The Germans concentrated their fire power at St. Lo and we knew it,” Silvani recalled. “Big guns from our ships off the coast took on the German concentration of men and machinery at this point.

“Four of us spotters were sent out to find the high ground and see what the Germans were doing on the other side. We could hear enemy tanks being moved around.

“The four of us were strung out along a road bordered by hedgerows. The Germans must have been watching us,” he said.

“They laid an .88 mm right in there and it got all four of us. I was hit by shrapnel in one arm, both legs and one testicle, but I got up and started running. A German machine-gunner hit me in the mouth and jaw. I fell over a hedgerow into the arms of a G.I. on the other side.

“The funny thing is I knew the medic who first took care of me. He was from San Francisco and we shared a pup tent back in Wales,” Silvan said. “He told me he’d bandage me up the best he could, but he had no morphine to kill the pain.  ‘John I’ve got to tell you I gave all my morphine to the three guys who were with you, but they all died.’

“Two of us were put on stretchers on the hood of a Jeep and taken to the division aid station. They gave me morphine and re-bandaged my wounds. I was moved  back to the beach and onto a landing craft for the trip back to a hospital in England.

“While they were loading us on the ship the Germans flew over with dive-bombers that attacked the armada along the Normandy beaches. We saw one of their planes hit by cannon fire. It went straight up then came straight down in flames and exploded into pieces.

“I had a premonition I had survived the German .88 attack, but I was about to die on the beach from a Luftwaffe attack. I survived and ended up in the 125th General Hospital in Worcester, England. I spent the next six months partially recovering from my wounds while German V-2 rockets were flying over,” Silvani noted. 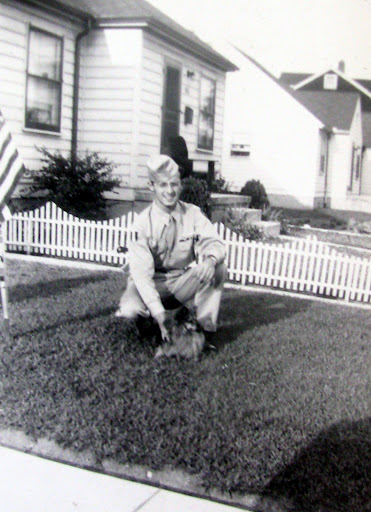 Pfc. John Silvani had just returned from World War II in 1945 when this picture was taken in front of his sister Josephine’s home in Wyandotte, Mich. Photo provided

“My doctor at the English hospital was from Baltimore. He told me one day, ‘I think you’re a candidate for going home.’ It was about the time the Battle of the Bulge was taking place. The major, who was the senior doctor, concurred–I was to be sent back to the states.

“‘We can put you on a boat or an airplane and send you home. If you choose a ship you can go right away, however, you’ll have to wait if you want to fly home,” the major told me. ‘You can be home in five days if you go by ship.’

When Silvani left the ship he used a cane and a wheelchair. He ended up in Percy Jones General Hospital in Battle Creek, Mich. The young Private 1st Class couldn’t walk very well and for the next seven years he wasn’t able to chew food because of the damage the German machine-gun bullet had done to his jaw.

Six months after arriving in Battle Creek he was discharged from the Army on July 25, 1945 and returned home to Detroit. Two months later the Japanese surrendered and World War II was over.

Silvani took the G.I. Bill, graduated from college with an engineering degree and spent the next 47 years working for the Ford Motor Co. When he left Ford two years earlier to go to war he had been a machinist, but when he retired in 1985 he had traveled to all of Ford’s assembly plants around the country working to improve the car assembly process in each plant.

He and his wife, Patricia, moved to Venice full-time in 2005. They have two grown children: Kimberly and Jeff.

This story was first published in the Charlotte Sun newspaper, Port Charlotte, Florida on Monday, June 25, 2012 and is republished with permission.

John L. Silvani a D-Day survivor dies in Venice at 89

This appeared in the Sarasota Herald Tribune on Friday, Aug. 17, 2012.

John is survived by his wife Patricia of Venice, FL; sisters Mary and Elizabeth Coogan both of Melvindale, MI.

John was a Private 1st Class serving with the United States Army during WWII, He was a member of Epiphany Cathedral. He graduated from the Ford Engineering School and worked as an engineer for the Ford Motor Company. Mr. Silvani’s ashes will be buried at a later date in the Washington Memorial Cemetery located in Ann Arbor, MI.