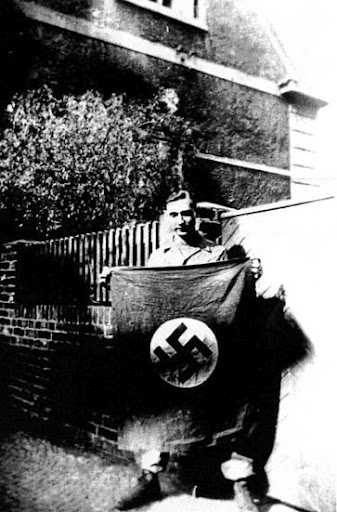 Floyd Gantzer holds a Nazi flag outside the apartment his anti-tank unit was living in in Berlin. Photo provided by Floyd Gantzer

Trained as a paratrooper at Fort Benning, Ga., in July 1944, former Pfc. Floyd Gantzer was attached to the 193rd Glider Infantry Regiment, part of the 17th Airborne Division at the Battle of the Bulge in Belgium in January 1945 during World War II.
“We were trucked to the battle,” the 84-year-old Port Charlotte, Fla. man said. “During the attack on Mande St. Etienne, Belgium, on Jan. 7 I was assigned to an anti-tank unit with a British six pound gun. It was a real bad day — cold and snowy. I was out front of the gun in a foxhole when my unit pulled out in a hurry and left me there.

Floyd Gantzer looks at a scrapbook full of memories. He served in the paratroopers during World War II in Europe and fought at the Battle of the Bulge and made a glider attack across the Rhine River during the closing months of the war. Sun photo by Don Moore

“I was out there for almost two days by myself, me and the Germans. I stayed in my trench until dark. When dark came I was happy because I could begin crawling back to my lines. The Germans were all over shooting at me in the dark. I stayed low and crawled on the ground until I finally made it back to the road and got back to Mande St. Etienne.”

The 17th Airborne Division held an 82-mile front from Givet to Verdun, France, in the Ardennes Campaign. The German army’s attack stopped four miles short of the Meuse River because their tanks ran out of fuel. The 17th Division was the last American division between the Ardennes and the North Sea.

By the time Gantzer and his anti-tank gun reached the Rhine River they joined the 194th Glider Infantry.

“We had the members of the gun crew and our six-pounder in one of the gliders that crossed the Rhine. We landed in a field in Germany and our left wing hit the ground first. The glider’s wings were ripped off, but neither our gun nor the crew members were hurt,” he said. “The Germans were everywhere. Everybody was going here and there and everything was so confusing. We finally got our gun crew together and started firing.”

It was the beginning of a long string of advances through one German village after another as the war went on and on.

“Most of the time snipers were our biggest problem as we went from village to village,” he said. “In one town there was a sniper holed up in a house shooting at us. I reached the house and was just about to throw a hand grenade into the house when a German family with a bunch of little kids walked out the front door with their hands raised. The sniper had let them out. A short time later the sniper surrendered, too. He was an 18 to 20-year-old German soldier. 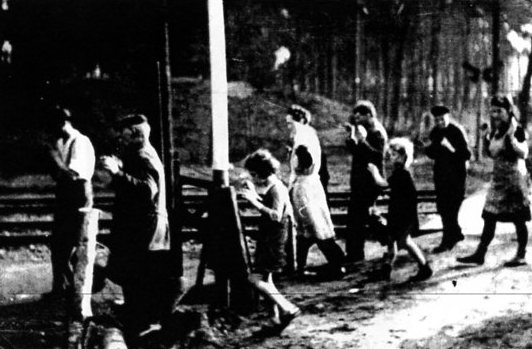 This German family escaped their home seconds before Gantzer was about to toss a hand grenade into their house where a German sniper was holed up. Photo provided by Floyd Gantzer

“If I had thrown that hand grenade into the house it would have killed ’em all!”

Deeper and deeper into Germany Gantzer and his anti-tank gun crew went as the war ground on and on. At one point outside a German village, he can’t remember the name of, they were face-to-face with three Panzer IV tanks. They were no match.

“Three big German tanks came up over the top of this hill one day while we were trying to take this town. They just sat there and laid into us firing round after round. We could do nothing about it with the gun we had,” he said.

“We all dug in in a hurry and were trying to stay as close to the ground as we could. I was scared. Anybody that’s been in combat and tells you they weren’t scared, that’s a lot of bull.

“After a while the three tanks pulled back. My outfit with our gun got the hell out of there in a hurry,” Gantzer recalled.

At one point he and the gun crew entered a German town and nearby was a concentration camp with 400 to 500 emaciated prisoners.

“They were Polish people and they were being starved by the Germans,” he said. “They were so glad we arrived with food.”

By the time Gantzer reached Berlin his anti-tank gun was attached to the 325th Glider Infantry Regiment. He had acquired a dachshund.

“I found a mother dachshund that was about to die and she had five just-born babies. I got some powdered milk and fed them with an eye dropper,” he said. “Two of them lived. I gave one to the mess sergeant in Berlin and I kept the other one. 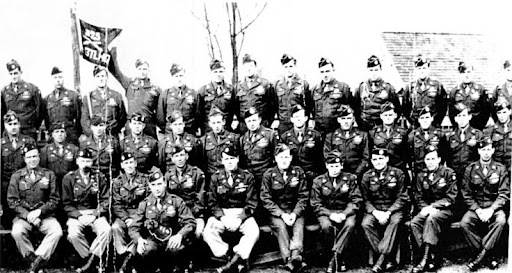 This is part of the 325 Glider Infantry Regiment in Berlin. Floyd is right up front with his dachshund, Mike, in uniform sitting on his knees. Photo provided by Floyd Gantzer

“I called him Mike. I brought him home with me on the Queen Mary. No animals were allowed to come back to the States on the ship, so I hid him in my duffel bag. You should have seen all the dogs running around on the deck of the ship the second day at sea,” the old soldier said with a grin.

This story was first published in the Charlotte Sun newspaper, Port Charlotte, Fla. on friday, Dec. 9, 2005 and is republished with permission.