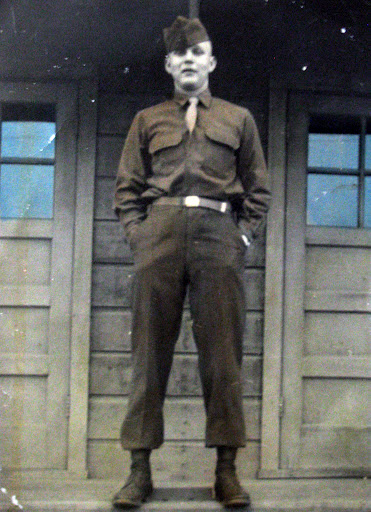 Cpl. John Flower of Englewood, Fla. became the manager of the bowling alley on Adak in the Aleutian Islands during the “Cold War” in 1946 when he served for a year in the Army in the north country. Photo provided

John Flower of Oak Forrest subdivision Englewood, Fla. said facetiously, “I was a corporal in the U.S. Army’s ‘Fighting 69th, PX Detachment’ on Adak, in the Aleutian Islands in 1946”. He ran a bowling alley for the troops on the godforsaken atoll.

“I graduated from high school at 17 in 1945 and wanted to joint the Army right away, but my parents wouldn’t let me. In those days if you hadn’t served you were considered a slacker.”

Until he was 18 he attended his freshman year of college at Ohio State University. Then he signed up for the Army.

“I was given all kinds of tropical Army clothes and my buddy got winter uniforms. He was sent to the Philippines and I went to Alaska,” Flower said with a chuckle 65 years later.

“After boot camp at Aberdeen, Md. I went to California and from there I took a World War II victory ship up the Inland Waterway to Seward, Alaska. Then we sailed across the Bearing Sea in January to Adak.

“The last leg of our journey was rough as we sailed from mainland Alaska out to Adak in the middle of the Aleutian chain at seven knots. My M.O.S. when I went overseas was 521–‘Basic Foot Soldier.’

Adak was a barren, windy place with no trees, no furry animals and only native Indians who subsisted on fish and rubbed their bodies with smelly whale oil. The island had a P-38 “Lightning” fighter squadron and a unit of soldiers to protect them. It also had a big port they called ‘The Pearl Harbor of the North’ with a lot of destroyers that patrolled the Bearing Sea looking for Russians. Approximately 3,000 to 4,000 service personnel called the island home, he said.

“This was during the ‘Cold War’ and the rumor was that the Russians were going to try and take the island away from us. But when I first arrived they didn’t give me a rifle. They told me to get my records and get on a two-and-a-half-ton truck.

“They took us to a bunch of Quonset huts half buried in the blowing sand. There was a recreation complex called ‘The Tundra Arena.’ 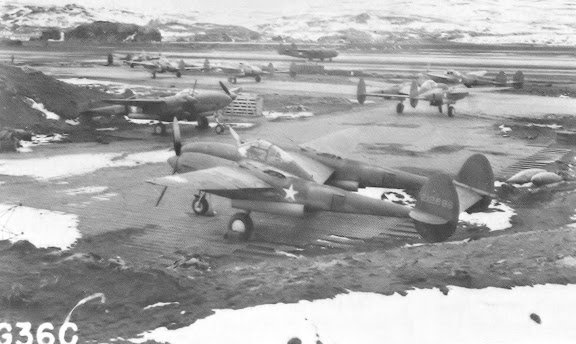 This was the P-38 “Lightning” fighter base on Adak built by the Seabees in 11 days and nights to protect the island form a Russian invasion that never happened. Photo provided

“The officer in charge of the detail looked at my records and noted, ‘Before you got in the Army you had experience working in your father’s restaurant. I’m gonna make you the bowling alley manager because it also has a restaurant.’

“The biggest house of prostitution in Seattle, Wash. was called ‘Mazies.’ The sign on the front of the bowling alley complex read: “Mazies.'”

For the next year the 19-year-old “Ground Pounder” took care of the lanes and saw that the troops were fed when they frequented his restaurant.

“My only managerial problem was that every month I came up $1,000 short in food inventory and I couldn’t explain the loss,” he said. “So one night I had myself locked in the restaurant after it closed.

“About an hour later I heard all this noise. Someone was taking the hinges off the door and then they lifted the door out to get into the restaurant. Then they started stealing food. I caught ’em and discovered it was the guys who lived upstairs above the bowling alley,” Fowler said.

The biggest event of the year took place when Gen. of the Army Dwight D. Eisenhower arrived on Adak.

“I don’t know exactly why he was up there, but I guess he came there to check out the troops. I was part of his honor guard,” the old soldier proudly said. “The general told us, ‘You men on Attu have really done a great job.’

“Problem was we were on Adak not Attu!”

About the only other event during the time Flower served on Adak happened when the U.S.O. troop arrived. It was a festive occasion and the entertainers took over his bowling alley to hold their show.

By January 1947 Cpl. John Flower had served his time on Adak. He had no rifle to turn in. He just left the island the way he arrived and returned stateside. A short time later he was discharged.

His discharge notes he received a “World War II Victory Medal” even though he didn’t joint the Army until about the time the Japanese surrendered aboard the Battleship Missouri in Tokyo Bay. Flower take on that is, “World War II didn’t officially end until 1948, I think.”

He returned to Ohio State University to complete his degree.

After graduating from dental school he arrived in Englewood in 1955. Flower became the first and only dentist in the area, a position he held for a decade until another tooth puller showed up locally.

What he is best remembered for in these parts are his eagle pictures.

“I was always interested in wildlife. When I came to Englewood I got interested in eagles. I took a course at Sarasota Vo-Tech and started shooting eagle picture with a 300 mm Pentax LX camera. Over the years I graduated to Nikon equipment and got an 800 mm lens to take the eagle pictures..”

Bird photos adorn the walls of his Oak Forest home.

Click here to view Flower’s collection in the Library of Congress.

This story was first published in the Charlotte Sun newspaper, Port Charlotte, Fla. on Monday, June 18, 2012  and is republished with permission.