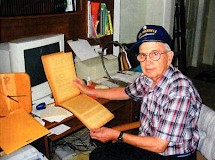 Stan Hardy looks at a daily bulletin passed out to the ship’s crew while serving aboard the carrier USS Shangri-La in World War II. The one the 83-year old Punta Gorda, Fla. resident is looking at tells about dropping the first atomic bomb on Hiroshima. Sun photo by Don Moore

The carrier USS Shangri-La sailed out of Pearl Harbor in early April 1945, headed for the war zone.

By then, the fighting was centered on Okinawa, the last major island battle before Allied forces were to attack the Japanese home islands.

On her way out of port, the Shangri-La passed the Carrier USS Franklin. A single Kamikaze suicide plane hit the Franklin 50 miles off the coast of Japan on March 19, 1945. With her deck in shambles and much of her superstructure a blackened and twisted metal mess the carrier limped back to Pearl. Some 724 sailors aboard the battered carrier were killed in the attack and 265 additional crew members were injured.

It was a sobering sight for Ensign Stan Hardy and the 3,000-man crew of the Shangri-La headed for the war in the Pacific. The young naval officer , who grew up in Newark, N.J., and now lives in Punta Gorda, Fla., was assigned to a couple of five-inch guns on the port side, aft end of the Essex Class carrier.

Shangri-La was the mythical Himalayan kingdom described in James Hilton’s best-selling book “Lost Horizon.” It was also the name President Franklin D. Roosevelt used when pressed by newspaper reports about the base from which Lt. Col. Jimmy Doolittle’s B-25 bombers had used in the first attack on Japan in April 1942 by American planes that flew off the carrier USS Hornet.

Ensign Stan Hardy of Punta Gorda, Fla. served aboard this Essex Class carrier during World War II. The 888-foot long carrier had 80 airplanes, a crew of 3,000 and could make 32 knots at flank speed. It took part in the Battle for Okinawa and the VJ-Day surrender on Sept. 2, 1945. U.S. Navy photograph provided by Stan Hardy

On April 20, 1945, the Shangri-La dropped anchor in Ulithi Atoll, the staging area for the Allies attack on Okinawa. The Shangri-La and the USS Yorktown formed the backbone of Carrier Group 584.

By then, four carrier groups ringed Okinawa during the 82 day battle that began Sunday morning, April 1, 1945. More than 1,000 Allied ships took part in the Okinawa invasion.

When the mostly American force captured the island, 12,520 U.S. soldiers, sailors and Marines had lost their lives and 36,631 were injured.  Japanese lost 110,000 men killed.

A total of 36 American ships were sunk at Okinawa and 368 others were damaged, mostly by Kamikaze attacks. There were also 763 Allied planes lost. The Japanese lost 7,800 planes and 16 ships.

The military significance of the island: it provided an anchorage for the U.S. Navy’s fleet and runways for B-29 “Superfortresses” that began pulverizing mainland Japan immediately after the island was captured.

For Hardy, a deck officer assigned to the five-inch guns aboard the Shangri-La, the most interesting time at sea was while serving as the junior officer on the bridge.

“The highlight of the war for me was standing watch on the navigation bridge with the carrier group all around us,” the 83-year-old remembered. “There was the Missouri off to one side of us and the New Jersey off to the other, two of our brand new top-of-the-line battleships.

“Then we had a couple of heavy cruisers and a couple of light ones. Way outside of them were several rings of at least 20 destroyers protecting us.

“Looking out at this array of ships on the horizon gave you a great sense of the total power of the Fifth Fleet. There were three other carrier groups beside ours that comprised the fleet.”

The new admiral picked a lucky ship to sail aboard. Although the Shangri-La saw considerable action during the Battle of Okinawa, the high water mark for Kamikaze attacks on the American fleet, it was never hit by a suicide plane.

The stars aboard the carrier were the pilots of Air Group 85 which flew from the deck of the Shangri-La in their Corsair gull-wind fighter planes, SB2C dive bombers or TBD or TBM torpedo bombers, according to Hardy.

“They were the heroes, but it was the ship’s company — people like me — that made it possible for the pilots to do what they did,” he said. “I remember one plane coming in to land all shot up and he couldn’t quite make the flight deck. He hit the back end of the carrier and exploded in flames. It didn’t take long for us to lose some planes.”

Much of the time the carriers laid off the beach at Okinawa 50 to 100 miles, providing air support for the Marines and Army troops slugging it out with the entrenched Japanese defenders. Before the shooting in the last major island battle of World War II was quelled, the Shangri-La and its carrier group headed for Japan some 600 miles further west.

“We were assigned to attack the airfields on the Japanese main islands used by the Kamikaze pilots,” Hardy said. “For 78 days we were at sea without ever going into port.”

With a crew of 3,000 aboard the 888-foot Essex Class carrier, a newsletter was distributed to the sailors on a daily basis. Hardy seems to have kept every one of the letters he received 60 years ago while aboard ship. 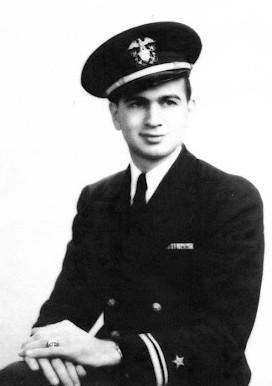 Lt. j.g. Stan Harris is pictured at the end of the war. After 20 years of service he retired as a Lt. commander. Photo provided by Stan Hardy

The newsletter for Aug. 10, 1945, reads in part: “The United States released Monday the most terrible weapon in the history of war, an atomic bomb carrying the destructive power equal to 20,000 tons of TNT. President Harry S. Truman said the first atomic bomb had been dropped on the Japanese Army base at Hiroshima some 16 hours before. He said that one bomb alone carried a more violent wallop than 2,000 B-29 bombers….”

A month later, on Sept. 2, 1945, while Gen. Douglas MacArthur was commanding the Allies surrender delegation aboard the Battleship Missouri anchored in Tokyo Bay, Hardy and the crew of the Shangri-La were still off the coast of Japan with its air group ready for action if needed.

The only action that day for Air Group 85 was to take part in the massive flyover when the Japanese delegation was unconditionally surrendering aboard the Missouri. World War II was history.

This story was first published in the Charlotte Sun newspaper, Port Charlotte, Florida on Sunday, Aug. 21, 2005 and is republished with permission.