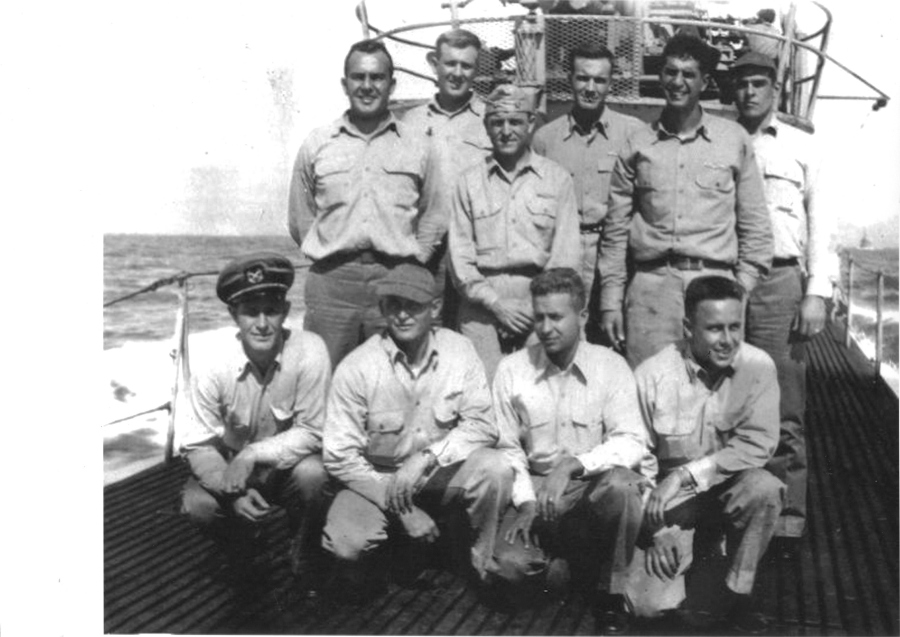 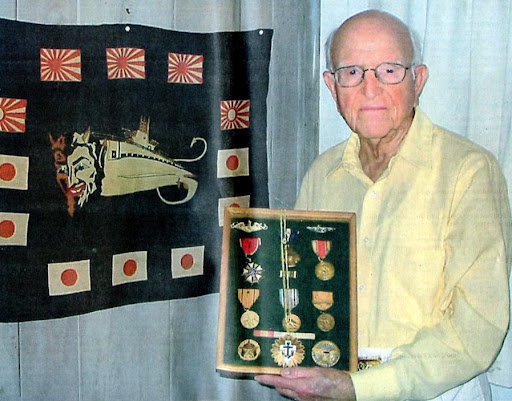 The enemy submarine, I-374, sailed out of Tokyo Bay into the open Pacific shortly before sunrise on Sept. 22, 1944. Capt. Ralph Styles, skipper of the sub USS Sea Devil, was laying in wait submerged near the harbor’s entrance.

It was the sub’s first day on station in enemy waters on its first patrol. The 94-year-old retired submarine skipper and Siesta Key, Fla. resident tells the story from there.

“At 5:38 a.m. the Japanese submarine was sighted. At 5:45 a.m. the Sea Devil made her first attack,” according to the ship’s log. “Four torpedoes were fired. Two exploded against the target. 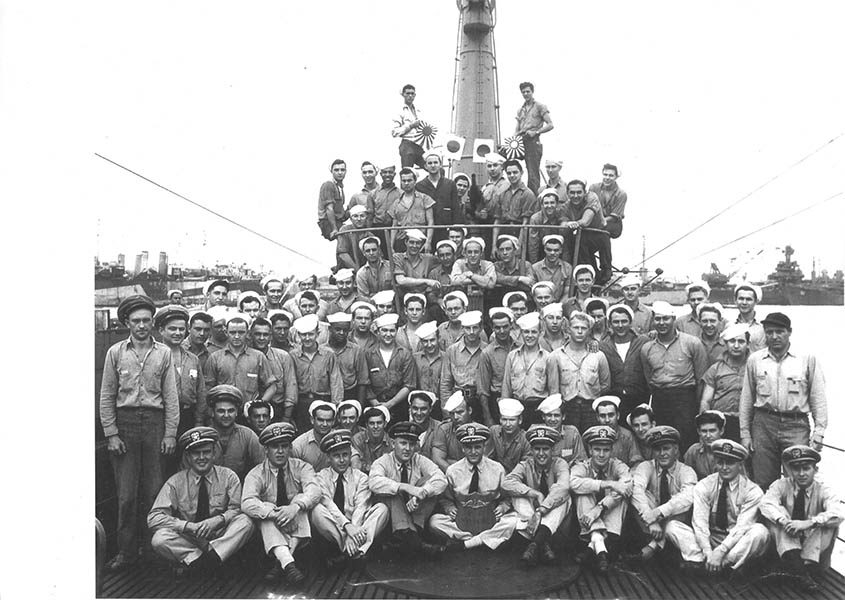 Capt. Styles is pictured seated front and center with the entire crew of the USS Sea Devil who compiled a fantastic battle record during the closing days of World War II in the Pacific. Photo provided

The rest of the patrol wasn’t nearly as eventful because of faulty torpedoes. During the following three weeks Sea Devil fired a number of torpedoes at several foes without positive results.

“We were on the surface in the Yellow Sea one night charging our batteries and we picked up (on radar) this large convoy on the way to the Philippines,” Styles said. “Just as it was getting daybreak, we submerged and went in.

“That’s when we hit the ammunition ship. The explosion pushed us down 5 feet by the depth gauge,” he said. “The ship was 500 to 1,000 yards away, but it really shook us up. We also sunk a troop ship. So we had to stay down until (the convoy) all got past. When we surfaced, we weren’t able to catch them again.

“We stayed in the area. About a week later, we had an ULTRA (message) saying a task force was headed from the Philippines to Japan,” Styles recalled. “When I surfaced that night there were five other (American) submarines I could communicate with on the radar close by, so we sort of spread out. Along about 7:30 p.m. we picked up this group of ships coming through our area. They were making 28 knots and the whole task force was zigzagging frantically and evaded all the other subs except ours because I was on the end of the line.

“I came up enough so that my radar was exposed to track the group, with the deck awash. I fired four aft torpedoes at the largest ship and two of them hit the carrier (Junyo) and a third one hit a cruiser. Apparently the carrier slowed to 12 knots, and according to the record, the USS Redfish was able to fire torpedoes at her.

“There were quite a few explosions going on, on the carrier. So they gave the Redfish and the Sea Devil credit for the carrier. Although they got the carrier back to Japan she was considered a total loss (and never went to sea again before the end of the war),” he said.

“So at the end of that patrol they … they gave me the Navy Cross, my first Navy Cross with the ship and my crew. They also put my name and picture in the submarine base ‘Roll of Honor.’ Anybody that got a Navy Cross is in the ‘Rogues’ Gallery’ on the Pearl Harbor Sub Base with a picture.”

“We were out there on the third patrol in the Yellow Sea and we’d been there for 28 days and hadn’t seen anything we could catch up with or that was worth wasting a torpedo on. Then the JT Sonar … picked up screws at 60,000 yards. We came up to periscope depth and couldn’t see a thing. We came up to expose our radar and picked up the convoy of fourth ships and three escorts,” he said.

“I surfaced and it was very, very foggy — you could hardly see the bow. So we started making our approach on this small convoy that was coming across toward Japan from Korea,” Styles explained. “We got in close enough on the surface until I could just see a very small outline of a ship and we started firing. We fired at two of the ships, as I remember, and then at one of the escorts with our stern tubes and ran back out.

“We reloaded and came back in again. They were firing at random because they couldn’t see anything. We could see flashes. We fired our torpedoes again and ran back out and reloaded and came in the last time and fired another round. I think all total we fired about 20 torpedoes.

“By this time there was only one escort left. He took off as fast as he could go over the horizon,” he said.

“We circled back because we had instructions to pick up (Japanese) survivors. We were zooming along through the fog and all of a sudden right in front of me was a raft with 30 or 40 people on it. I hit the raft and it scattered people all over the water.

“The first lieutenant and some of the other people came topside so we could pick up some of the survivors to take back, but none of them wanted to come aboard,” Styles said. “The water temperature was about 40 degrees. They wouldn’t last long.

“It was toward the end of our patrol as we were coming out of the Yellow Sea back into the Pacific about 8 or 9 o’clock one night. The Officer of the Deck, Vern Crosby, the gung-ho college boy said, ‘Captain, I saw something up here.’ I rushed to the bridge and he said, ‘I saw some sort of a flash or flare or something.’

“We circled back around and got the search lights up. There were two men in individual rubber boats tied together. They were Marine aviators who had been in the water 36 hours and they were very much dehydrated.

“We pulled them in and they said there were two more aviators out there. They were off the carrier USS Essex. They told us they had been tracking a battleship the Japanese had taken out of Yokosuka … and had run out of gas and had ditched ….” 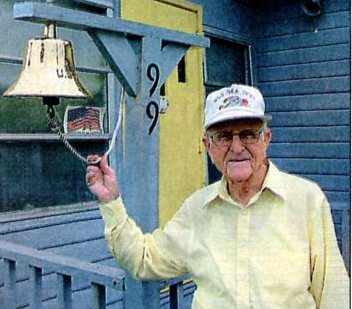 The 94-year-old mariner stands beside the ship’s bell in the front yard of his 100-year-old Siesta Key home. Sun photo by Don Moore

One of the aviators they picked up heard the sub’s engines and fired his pistol with tracer bullets in it. That attracted the attention of the Officer of the Deck who called the captain.

They continued to scout the area in the Sea Devil. About an hour later they spotted a third Marine asleep in his one-man life raft and brought him aboard. They spent all the next day searching for the four aviator but never located him. So that second night they headed back to Saipan.

On their way home the Sea Devil received this message: “Commander Submarine Pacific Fleet following message from Commander Task Force 58: ‘Maybe it is routine for you fellows, but your rescue of our Marines is considered quite extraordinary in this Force. Many thanks.’

“We also got, for Sea Devil, one ‘Well Done from Commander Submarine Pacific Fleet to Styles and his eagle-eyed crew for rescuing the three Marine pilots during the night. ‘Rampaging Sea Devil gets Commander in Chief Pacific Fleet and Commander Submarine Force’s heartiest congratulations on hitting the Nipponese Jackpot and scattering Maru’s (ships) all over the bottom. You lead the hit parade this month, Styles.'”

Much of this story was taken from Capt. Ralph Emerson Styles’ comments in: “Submarine Operations in WW II and the early Cold War” published by the Naval Historical Foundation Oral History Program.

THE SECRETARY OF THE NAVY WASHINGTON

for service as set forth in the following

“For exceptionally meritorious conduct in the performance of outstanding services to the Government of the United States as Commanding Officer of the U.S.S. SEA DEVIL, during the First War Patrol of that vessel in enemy Japanese-controlled waters of the Pacific, from Sept. 3 to Oct. 25, 1944. Skillfully maneuvering his ship into a favorable position to strike enemy shipping, Commander Styles launched a well-planned and brilliantly executed torpedo attack to sink a 1,900 ton hostile submarine. Although subsequent aggressive attacks were hampered by intense anti-submarine measures and extremely adverse weather conditions, he courageously and expertly directed this vessel in returning safe to port without damage. Commander Styles’ inspiring leadership and superb ship-handling throughout this hazardous patrol reflect the highest credit upon himself and the United States Naval Service.”

1943: Became captain of USS Sea Devil and made three war patrols on her

1955-58: Assistant Director of Naval Intelligence during Soviet submarine build-up and U-2 flights

1960-62: On staff, Joint Chief of Staff, Planning for the establishment of Defense, Military Intelligence and first preemptive attack on USSR.

This story first appeared in the Charlotte Sun newspaper, Port Charlotte, Fla. on Friday, May 21, 2004 and is republished with permission.

He was born in Asheville, N.C. Feb. 27, 1910. He was the son of J. Scroop and Eloise Frisbee Styles. After graduating from the Asheville High School he attended Weaver College for one year and then the University of Tennessee for a year before entering the U.S Naval Academy in 1929, where he graduated in the upper half of the class of 1933 thereby receiving a commission as Ensign. After 2 years as a ship’s officer on the U.S.S. Lexington, he was assigned to the staff of Commander Air Craft Battle Force. At that time there were only three aircraft carriers in the Navy. In l937, he shifted to submarines attending Submarine School in 1937.

Captain Styles was Chief Engineer of the U.S.S. Narwhal, which was in port in Pearl Harbor when the Japanese attacked on Dec. 7, 1941. After two war patrols and the Battle of Midway he was given command of U.S.S. S-20 in New London, Conn. for a year. He was then ordered to command U.S.S. Sea Devil being built in Portsmouth, N.H. It was commissioned in May 1944 and proceeded to the Pacific for three patrols in which the Sea Devil accounted for 11 ships and earned Styles the Legion of Merit, two Navy Crosses and eight Naval Unit Citations for the ship.

After tours ashore in Newport, R.I. and Puerto Rico he took command of Subdivision 72 in the Pacific during the Korean War, a year in Command of the U.S.S. Nereus submarine tender in San Diego, then attended the Naval War College and was given Submarine Squadron 10 in New London, Conn. to which the first nuclear submarine, the U.S.S. Nautilus was attached. He went to Washington, D.C. for shore duty as assistant director of Naval Intelligence.

His last sea duty was command of the Submarine Flotilla in San Diego and Comsubpac representative on the West Coast for all submarine activity.

Captain Styles last naval tour was back in Washington on the Joint Staff, first as assistant director of Intelligence, then head of targeting branch, and lastly planning the Defense Intelligence Agency.

He retired Dec. 3, 1962 and moved to Sarasota, where he was the first director of planning for New College, which had just hired I.M. Pei, the architect, to build a complete college on the old Charles Ringling Estate. In 1970, he opened Ralph Styles Real Estate Office, which he ran until 1990.

He was preceded in death by his beloved wife Elizabeth and his two brothers, James S. Styles, Sr., and Judge William M. Styles.

In lieu of flowers, contributions can be made to Swannanoa Valley Museum, P.O. Box 306, Black Mountain, NC 28711.