This badly damaged picture of Pfc. Bill Waits of Nocatee, Fla. is his only service picture. He served in the Army’s 26th Division with Gen. George Patton’s 3rd Army in France and spent seven months in a German POW camp before he was liberated along with another 110,000 other Allied prisoners. Photo.provided

The steel-plated gold cover on the outside of Bill Waits’ “Heart Shield Bible” he carried in his breast pocket while a rifleman in the 26th Infantry Division during the Allied invasion of France in the closing months of World War II was inscribed in flowing script: “May this keep you from harm.”

Tens of thousands of these pocket-sized Bibles were handed out to soldiers headed into battle beginning in 1943.

“My mother gave me the Bible. She told me, ‘If you keep this Bible with you it will keep you safe.’ It was supposed to be able to stop a bullet.”

“The Good Book” kept him from being wounded, but it didn’t keep him from being captured. He spent seven months in Stalag-7A until shortly before V E-Day, May 8, 1945, when the Nazis surrendered to the Allies.

From Day-1, as a guest of The Fuehrer, Waits used the margins of his Bible as a diary and penciled in comments about his daily routine in the the camp. 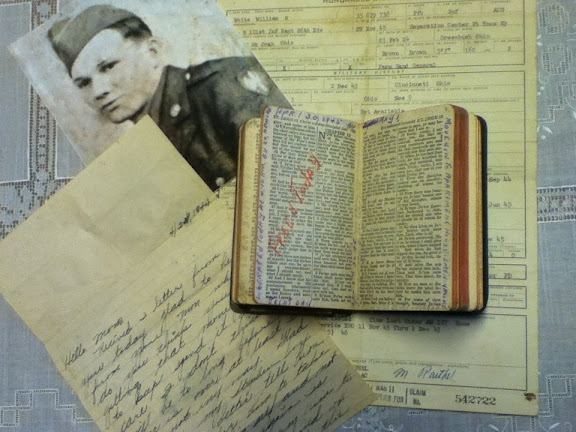 This collage of Pfc Waits WWII memorabilia includes a picture of himself, a letter he wrote home to his mother while in a POW camp, the Bible with its daily notations in it and his Honorable Discharge. Sun photo by Mary Auenson

The 88-year-old Nocatee resident grew up in Mt. Orab, Ohio. Shortly after graduating from high school during the middle of the Second World War Waits was drafted into the Army. He ended up in the 26th Infantry Division, a National Guard outfit.

After finishing basic training at Fort Jackson, S.C. he was shipped to Camp Kilmer, N.J. were we boarded a liberated Italian ocean liner and sailed with a convoy to France. They landed at “Yellow Beach” along the coast of Normandy.

“It was the fall of 1944 when the 26th Division became part of Gen. George Patton’s 3rd Army,” he explained. “Shortly before we went into battle the general came to visit us at a little French town I can no longer remember the name of.

“He told us while standing on the hood of his Jeep wearing his ivory-handled six-guns, jodhpurs and shiny-brown leather riding boots, ‘The 3rd Army never digs in so you can throw away your intrenching tool.’

“Right after his speech our company was assigned to capture a town held by the Germans. We screwed up and didn’t take it. In fact we lost quite a few of our men.

“I remember a German tank with an .88 mm gun fired at some of our troops. The enemy shell hit a tree nearby where our men were and exploded. It rained shrapnel down on them killing many.

“Three of us continued advancing through the town when we got captured by the Germans. The next thing we knew we were surrounded by the enemy with rifles.

“We were green troops. The Germans were much better soldiers than we were because they were seasoned. That’s probably the reason we didn’t capture the town from them.

“‘Throw down your weapons,’ they told us. We did and they took us to a house in the village they were using as a command post where we were interrogated. A German captain, who spoke English as good as we did, questioned us.

“Then we were put in an old school house along with 50 or 60 other American POWs. We spent the night there and ate lousy German brown bread. The next morning we were marched to the local railroad station, packed into cattle cars for the ride to Stalag 7-A that was two days away near Moosburg, Germany,” Waits recalled 65 years later.

The POW camp near Moosburg had 110,000 or more prisoners located a few miles outside Munich. There were thousands of Americans, English, French and Russian POWs in the camp divided into sub-camps by nationality. He spent the next seven months in Stalag 7-A trying to survive and writing his daily notes in the margin of his Bible.

On April 29, 1945 the 47th Tank Battalion was just outside the gates of Stalag 7-A about to force its way into the camp. The unit went head-to-head with a German SS unit that got the short end of the stick from the American armored unit. Most of the elite Nazi soldiers were found dead in surrounding fields after the shootout with the tankers. 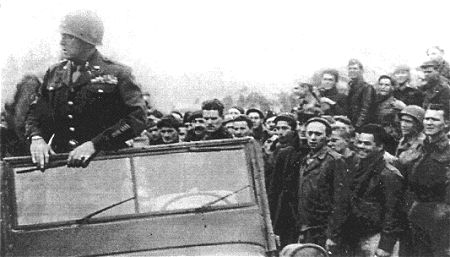 Gen. George Patton arrives in his Jeep during the liberation of Stalag 7-A near Munich, Germany during the closing days of World War II. By this time Waits had been transferred by boxcar to Munich by the Germans and was still a POW. Photo provided

It wasn’t long afterward that Gen. Patton, with his ivory-handled revolvers, arrived with the rest of the 3rd Army in tow. But Waits missed the surrender and the turnover of the facility to American forces.

“Just before this happened the Germans took some of us out of the camp and moved us by boxcar to a railroad siding on the south side of Munich,” he said. “They left us locked in the boxcars and our boys bombed Munich that night. Bombs were falling all around us. We were lucky we didn’t get blown up.

“The next day an American armored division, I can’t remember who, liberated us. We were taken out of the boxcars and allowed to move into a nearby apartment building that hadn’t been leveled by Allied bombers,” Waits recalled.

“An American captain serving with the armored division ran the German civilians out of the apartments and we moved in. We wrecked the place in no time.

“We started getting American chow about then. When I first went into the Army I weighed 185 pounds. By time time I got out of the POW camp I weighed 125 pounds,” he said.

A couple of weeks later the American survivors of Stalag 7-A were flown by C-47 transport plane from Munich to “Camp Lucky Strike” at Le Havre, France, a debarkation port for tens of thousands of American soldiers headed home.

“We got aboard a liberty ship and sailed across the Atlantic to New Jersey. When we arrived back at Camp Kilmer, just after V E-Day (Victory in Europe), they opened the kitchens for us 24-7. We could eat anything we wanted at any time,” Waits remembered.

After a 30-day leave to go home he was sent to a military police unit in Emporia, Kan. Eventually Waits was transferred to Kansas City, Kan. where he served the remaining few months of the war guarding the train station there. Like millions of other servicemen he returned home. He went to work for a big shop in Cincinnati, Ohio that made machine tools where he remained for the next 20 years. 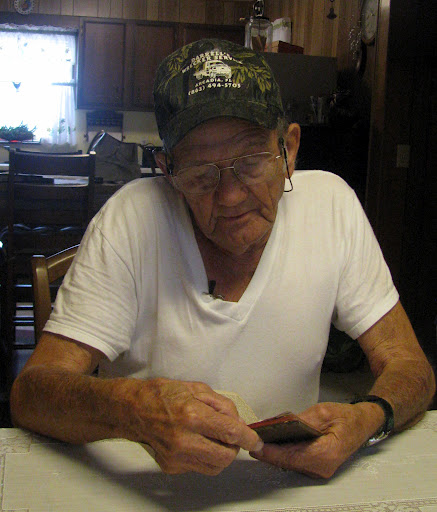 Waits holds the “Heart Shield Bible” his mother gave him that he carried in his breast pocket while serving on the front lines in France. He used the margins of “The Good Book” to record his daily thoughts during the months he was held prisoner in Stalag 7-A in Germany. Sun photo by Mary Auenson

In the early 70s he and his wife, Helen, and two daughters moved to Arcadia. Waits went to work for for Chris’ Building Supply where he worked until they closed after Hurricane Charley devastated the town in 2004.

The couple’s two children: Karen and Billie-Jo, grew up in Arcadia and live locally with their families.

This story was first published in the Charlotte Sun newspaper, Port Charlotte, Fla. on Monday, May 21, 2010 and is republished with permission.

Bill was a veteran of World War II, serving honorably with the U.S. Army. He was awarded the Good Conduct Medal, WWII Victory Medal, American Theater Ribbon, and European-African-Middle Eastern Theater Ribbon with three bronze Service Stars. Bill was a POW for eight months during WWII.

He loved to travel, pitch horseshoes, fish, play baseball, and watch baseball and nature shows. Bill worked as a millwright for Cincinnati Milling for 20 years, and for Christ Building Co. here in Arcadia, Fla., for 20 years.

A Celebration of Life for Bill will be conducted from 2 p.m. until 4 p.m. Saturday, Sept. 27, 2014, at the Chapel of Ponger-Kays-Grady Funeral Home, 50 N. Hillsborough Ave., Arcadia. Private military honors will be rendered by the U.S. Army Honor Guard at Sarasota National Cemetery in Sarasota, Fla. Online condolences may be made at http://www.pongerkaysgrady.com.

Arrangements are by Ponger-Kays-Grady Funeral Home and Cremation Services, Arcadia.