The “Suella J” was 1st Lt. Smith’s B-29 “Super Fortress” he flew over the Soviet Union while spying on the Russians shortly after World War II. Photo provided

“Ferrets flights” are what they were called. They were aptly named because the super-secret missions in modified B-29 bombers immediately after World War II were made to ferret out information about the Soviet Union’s most sensitive military sites.

First Lt. Roger Smith of Punta Gorda, Fla. was the pilot of “Suella J,” one of the modified B-29s assigned to the 316th Bomber Wing flying out of Yokota Air Base, Japan, in November 1946. He and his crew were in the forefront of what would become known for the next four decades as the Cold War.

Officially these flights never happened. Having U.S. bombers fly over Soviet air space was a violation of international law.

“When I arrived at MacArthur’s headquarters in Tokyo I was briefed by a colonel on the general’s staff,” Smith recalled. “He told me, ‘Under no conditions will you ever fly over Russia.’ He repeated this two or three times.”

Roger Smith in his leather flight jacket that was sheep skin lined.

The staff officer then laid out a series of installations the Army Air Corps wanted photographed deep inside the Soviet Union.

“Here’s the target shoot when you get up there,” the staff officer told Smith. “Keep in mind, if you agree to take this mission and you get shot down, we will deny we had anything to do with the mission, because you’ve been told not to go there.”

Smith and his crew agreed to fly the risky missions. For the next three months they would fly a series of highly classified, dangerous photo reconnaissance missions over 40 Soviet sites. These were locations the U.S. government wanted to know more about if World War III was to start. 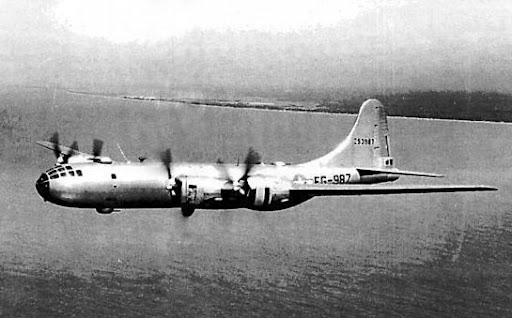 Smith is at the controls of this B-29. He was on his way from the Bahamas to the U.S. during a flight from England after World War II. Photo provided

“The necessity for getting these pictures right now was that Russia didn’t have radar to detect us. But they were going to have it very shortly,” Smith said. “We made our first mission on Nov. 22, 1946.

“Our B-29 had a separate wing underneath with a radar unit that had tremendous range and capability. I could easily see a person walking across a runway 100 to 150 miles away.”

The images they were seeing on radar while flying over the Soviet Union were captured on negative film for future examination and evaluation. The special radar units made for these aircraft covered a swath of ground 15 degrees either side of a center line of the B-29.

“We flew a minimum of 16-hour flights each time we flew over Russia,” he said. “I had to stay in the soup. If I broke out of the clouds they could see me from the ground. I liked to fly at 25,000 feet because that gave me a better chance of staying in the clouds.”

The problem was that the Army Air Corps had no sophisticated weather forecasting capabilities. All Smith could do was fly out of Yokota and head north toward the Soviet Union, hoping the weather was miserable when he got there. His radar equipment was capable of taking detailed photographs no matter what the weather conditions.

During their missions behind the “Iron Curtain” photographing secret military installations, Smith and his crew were lucky. They had no encounters with Russian fighters and were never discovered flying over enemy territory.

Their problems developed on two occasions while returning to Japan during these secret flights.

“It was the night before Thanksgiving and we were coming back into Yokota from Russia. The weather was absolutely miserable,” Smith said. “The wind was blowing upward of 50 mph, the rain was horizontal and visibility was about 300 feet.”

He only had one runway to land on. Because of the crosswind and the rain, landing was hazardous. The horizontal rain was defusing the runway lights and making it impossible for him to see where to land.

His B-29 would up off the runway stuck in the mud at Yokota Air Base in Japan while landing in bad weather at night. Neither the crew nor the plane were damaged. Photo provided

Halfway down the runway, he ran the big four-engine plane off the concrete strip and into deep mud. The B-29 wasn’t damaged and no one aboard the bomber was injured. They were just stuck in the mud.

On Thanksgiving day, the crew borrowed a couple of bulldozers and used them to pull “Suella J” out of the mud. After a good wash job, the B-29 was ready to fly again.

Potentially far more hazardous was an encounter Smith and his crew had with an American P-51 fighter on a return trip from the Soviet Union during a later secret mission.

Once Smith was out of Russia, he didn’t care if he was picked up by radar in Japan. He had a special code word he used when confronted by U.S. interceptors that caused them to break away and fly off.

“I was intercepted by one of our P-51 fighters on my way back to Yokota. When I first saw him, he was sitting off my right wing,” Smith said. “I got on the radio and repeated my code word, but it didn’t mean anything to the fighter pilot.

“I told him I was headed for Yokota. He said I would have to accompany him back to his base. I explained I couldn’t do that because the runway at his base wasn’t long enough for a B-29 to land on.

“‘My instructions are very plain,’ he said. ‘If I find an aircraft that can’t properly identify itself, I’m to shoot it down.’

“At that point, I instructed that all of my gun turrets be turned on him. Then I got back on the radio with the fighter pilot and said, ‘If you’ll notice, all of my guns are aimed at you. If you drop your wing one inch, I’ll shoot you down.'”

The P-51 pilot contacted his base and got permission to follow Smith’s B-29 into Yokota for a briefing. Once he received the official word, that was that. He flew off in his fighter satisfied.

It wasn’t too long after Smith’s post-war adventures in Japan that the now 85-year-old Punta Gorda retiree decided to make the Air Force an career. He ended up working for the Strategic Air Command.

The local aviator is pictured in his U.S. Air Force uniform about the time he retired after 28 years in the service. Photo provided

By the late ’40s, he was stationed at MacDill Air Force Base in St. Petersburg, Fla.. His job: teaching SAC pilots and crews how to fly the B-29. Five or six years later, Smith became a member of SAC’s targeting staff. He was one of the people who determined what targets would be selected for bombing.

“It was in this position I was again working with the same negatives I took right after the war while flying over Russia,” Smith said. “These negatives were put in the nose of nuclear bombs.

“Once a nuclear bomb is released from a bomber, it becomes a missile that can fly on its own for up to 800 miles. When the negative in the nose of the bomb matches the terrain it’s flying over, it explodes,” Smith explained.

He had come a long way since he soloed in a J-2 Piper Club in the 1930s. He retired on Sept. 30, 1969, as a lieutenant colonel with more than 6,000 flying hours logged over 40 years. By then, Smith, had flown almost every heavy bomber in America’s arsenal since qualifying to fly a B-17 “Flying Fortress” during World War II more than a half century earlier.

This story first appeared in the Charlotte Sun newspaper Saturday, Oct. 5, 2002 and is republished with permission.

He started flying at Purdue Airport and later purchased his own airplane which he flew until 1941 when he enlisted in the Army Air Corps. At this time he was working in Indianapolis, Ind., and took a leave from the U.S. Dept. of Agriculture, and was hired to design the water system at Camp Atterbury, Ind. This he almost completed before the Army called him to active duty.

Roger was commissioned in April 1942 to be an instructor pilot since he had a commercial license and over 500 hrs. upon entering the service. He instructed in single engine basic and advance and twin engine advance, then 4 engine B-17 teaching co-pilots and gunners.

With the B-29 program he trained with a combat crew and was sent to Okinawa as the war ended. He landed the first B-29 at Yakota, Japan after a runway was built to permit the landing of a B-29 in Japan.

He was given the job of photographing all the targets in Russia that the U.S. would want, should we have problems with Russia. This took six months, and was never caught by the Russians. In 1947, he was assigned to SAC and flew the B-47 and B-52. He spent one year in Korea as Base Supply Officer for the 67 Tac. Recon.Wing.

Roger married his wife Phyllis in 1970 by Judge Harold Smith, Roger’s father, in Redkey, Ind.. They lived in Alexandria, Va. for nine years and he worked for the Fairfax School system eight years before moving to Punta Gorda, Fla. in 1979.

He was a member of the Burnt Store Presbyterian Church.

A Masonic Service will commence at 3:30 pm at the funeral home. The Memorial Service will be held at 11:00 am, Thursday, October 14, 2010 at the Burnt Store Presbyterian Church, 11330 Burnt Store Road, Punta Gorda, FL 33955 with the Rev Tim Stewart officiating.

Inurnment with full military honors will be held in the spring at Arlington National Cemetery, Arlington, VA. The family requests donations in lieu of flowers in memory of Roger be made to the Araba Shriners Childrens Hospital at shrinershq.org or to the Burnt Store Presbyterian Church.