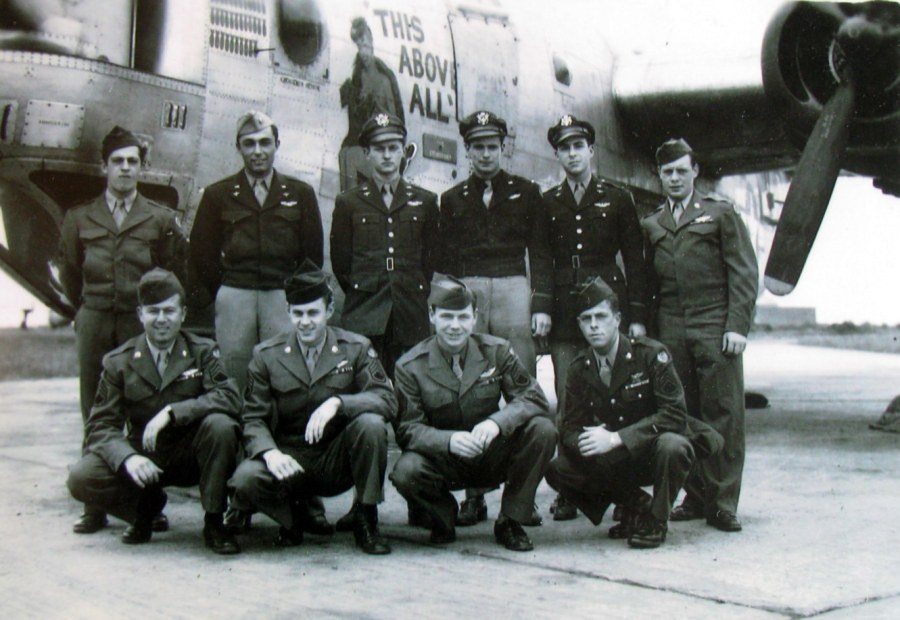 This is the crew of "This Above All", a B-24 "Liberator" bomber Dave McKalip of Port Charlotte, Fla. flew on in World War II as part of the 8th Air Force in England. He went on 30 combat missions. McKalip is standing in the back row at far right. Photo provided 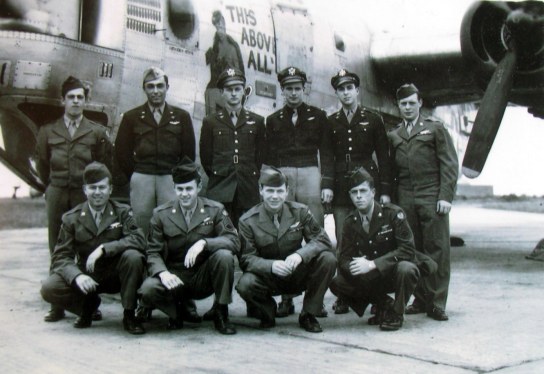 This is the crew of “This Above All”; a B-24 “Liberator” bomber Dave McKalip of Port Charlotte, Fla. flew on in World War II as part of the 8th Air Force in England. He made 30 combat missions. McKalip is standing in the back row at far right. Photo provided

David McKalip flew 30 combat missions as a radio operator on a B-24 “Liberator” bomber during World War II. The mission that made the biggest impression on him 65 years later was the flight that leveled Dresden, Germany.

McKalip, a Port Charlotte, Fla. resident, was a member of the 466th Bomb Group, 8th Air Force, which flew out of Attlebridge, England. His four-engine heavy bomber was dubbed “This Above All.”

The Dresden mission devastated that city and was very controversial.

“Dresden was supposed to be an open city. We weren’t supposed to bomb it. The story I heard was that the Americans bombed Dresden because the Russians insisted on it,” the 86-year-old former sergeant explained.

Dresden was bombed by the American Air Force and the Royal Air Force on Feb. 13-15, 1945, fewer than three months before the end of the war in Europe. A total of 1,300 heavy bombers dropped 3,900 tons of high explosive and incendiary bombs on the capital of Saxony. The Allied saturation bombing destroyed 15 square miles of the city’s center, killing an estimated 25,000 to 40,000 residents.

“We weren’t harassed by enemy fighter planes, but the flak from German 88 antiaircraft guns was heavy,” McKalip recalled.

“I sat right behind the copilot on a little stool that swiveled out from the bomber’s frame. Often I’d stand up and look out the cockpit at the flak coming up at us. This particular day I could see American bombers for miles and miles, heading for the target. Way off on the side, B-17 ‘Fortresses’ were coming in and turning toward the same target,” he said.

A mission book on the 446th Bomb Group prepared by some of the group’s members after the war notes, “We got a shock at briefing. Plan A was to hit the big airfield at Leisa, south of Berlin. The secondary target was the marshaling yard at Dresden. All of this was quite a surprise because most of our missions had been just over the line into Germany to small towns.”

“As we approached our target, the flak started hitting our ship. It sounded like hail on a tin roof,” McKalip said. “The pilot told me to check the plane for damage. I reported back to him I could see air bubbles in the sight gauge on the reserve hydraulic fluid. When the copilot went to put the flaps down, they wouldn’t move.”

The crew of “This Above All” knew they were in trouble at that point. They had to find an emergency landing strip somewhere short of home base at Attlebridge.

“Just past the White Cliffs of Dover there was a concrete pad that must have been a mile square where we landed our B-24. It wasn’t an easy landing because one of our wheels wouldn’t drop down and lock, despite the best efforts of myself and the plane’s engineer,” McKalip recalled. “Initially, the pilot suggested we should all bail out before he tried to land. We all decided to stay aboard.

“The plane touched the concrete with one wheel up and one wheel down and ground-looped. After the props stopped turning when we landed, smoke billowed through the bomber,” he said. “Some of us escaped by jumping out of the waist gunner’s window where his .50-caliber machine gun is mounted. We all got out and away from the plane without injury.

“A short while later, a C-47 transport plane landed and took us back to our base. We were flying on another mission the next day.

“On another occasion, we were coming back from a bombing run over Germany when we lost our outside port engine. It got hit by flak and lost its hydraulics, so the pilot couldn’t feather the props. It was windmilling and causing the whole ship to vibrate seriously, forcing the pilot to land in a field outside Paris,” McKalip said. “It was right at the time the Army was fighting the Battle of the Bulge. Because the weather was so bad, nothing was flying so we were stuck there for a week or so waiting for the weather to improve.

“We partied in Paris. I remember a French family invited me to attend a movie with them. It was in French and I didn’t understand French, but I laughed when they laughed during the show,” he said. “Afterward, they invited me to their home and we had dinner. Then the weather improved and the crew was picked up by another C-47 and taken back to our base in England.”

By June 1945 he was back in the States, taking a 30-day leave before being reassigned to a B-29 “Super Fortress” crew headed for Japan and the war in the Pacific. McKalip was retraining to become a radar operator on the big new bomber. However, he got lucky, like millions of other servicemen. The Japanese threw in the towel on Aug. 14, 1945.

“It was one heck of a party. Thousands flooded the two main downtown streets. Where they converged, people were being tossed in the air halfway across the streets in the melee,” he said.

Like millions of his military buddies, he took advantage of the G.I. Bill, graduated from electronics school, and opened a TV repair shop in downtown Chicago that grew with the industry. He had 70 employees working in six store locations by the time he retired and moved to Florida with his wife Frances in 1992.

Former Sgt. David McKalip will be a guest April 24 on a local “Honor Flight” to the World War II Memorial in Washington, D.C. This is a privately funded effort to pay all expenses of any area WWII veteran to see the memorial on a single day’s outing to the capital.

“I want to thank the good people of Charlotte County for this honor. I would like to express my gratitude to every one of them,” the former airman said. 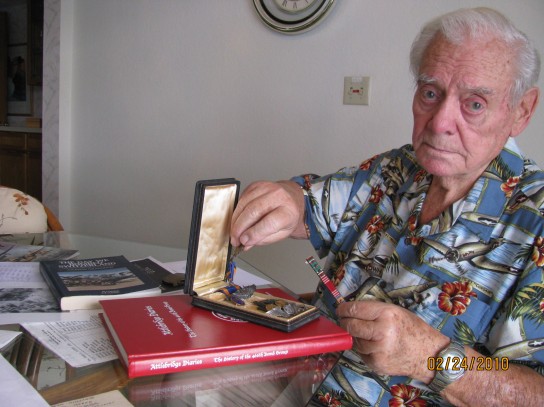 Dave McKalip of Port Charlotte looks through a box containing the commendations he received as a member of a B-24 bomber crew in World War II. Sun photo by Don Moore

This story was first published in the Charlotte Sun newspaper, Port Charlotte, Florida on Monday, March 8, 2010 and is republished with permission.