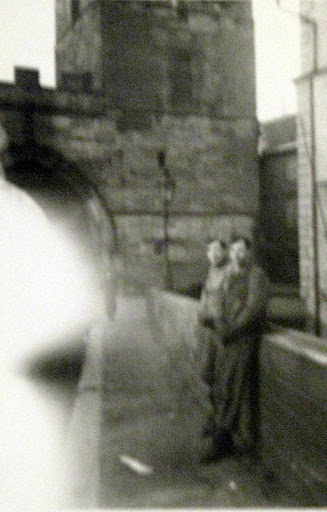 John Maloney (right) and Devereaux Parte, a counter intelligence agent, stand on the Charles River Bridge in Prague, Czechoslovakia in 1945 at the close of World War II. There was still a lot of spying going on among nations despite the fact the conflict was over. Photo provided

EDITOR’S NOTE: This is the first of two parts.

John Meloney was smart and had an ability with foreign languages, that’s why the Office of Strategic Services (O.S.S.), the precursor to the Central Intelligence Agency, selected him to be a World War II spy.

Early in the war he was a 22-year-old sophomore at Cornell University in Ithaca, N.Y. and about to be drafted, so he joined the Army. Meloney wanted to serve with the famed 10th Mountain Division and ski into battle, but he wound up a corporal in an artillery unit at Fort Sill, Okla.

“After a long time they shipped me from Sill to the University of Minnesota at Minneapolis where we lived in an abandoned grade school,” the 88-year-old Port Charlotte resident said. “It was tough because if you wanted to shave you had to do it on your knees because everything was low and made for kids.

“We took language courses five hours a day every day. Because I had a Swedish background I took Swedish. Before I completed the course I was sent to a Girl Scout summer camp outside Washington, D.C. with a bunch of other people from various branches of the service who spoke a foreign language,” Meloney said.

“From there I was put on a ship and we sailed to Europe. We arrived in Glasgow, Scotland and got on train headed for London,” he said. “From London we took Army trucks and ended up on an estate outside the city. It was at this point we learned a little about what we’d be doing.

“The public thought the estate was being used as a hospital for shell shocked soldiers because there were women in nurses uniforms walking around the grounds,” Meloney explained. “These middle-aged women weren’t nurses – they were code breakers working for the English Secret Service.

“Their job was to decode messages being sent by British spies working behind German lines. These spies were collecting all kinds of information about the area they were working in,” he said.

“At one point the women were 100 messages behind schedule and desperately needed help. I volunteered. I went to work as an code breaker with an English ‘nurse’ at my side working with me,” Meloney said. “I might decode a message requesting more ammunition. Or the sender might suggest a good time and place to air drop supplies to the underground.

“Some 50 people were working to decode these messages. At our dinner table on Christmas 13 languages were spoken by the people at my table. The only common language we had was German,” he said.

More than 65 years later two incidents are vivid in his memory of the period: “A British major came through inspecting our operation. The night before he had been riding in a subway in Paris wearing a Nazi uniform during the German occupation of the city. He was high up in British intelligence.

“I met a Norwegian dressed in an American uniform at a USO club. We struck up a conversation and learned we were both working in intelligence. He was suppose to have parachuted into Norway the night before, but because of poor weather conditions he didn’t make the jump.

“By this time I was getting bored with my decoding job and wanted something more exciting to do. I wrote a letter to my headquarters in London telling them I had a Scandinavian background and wanted to be sent to Norway or Sweden as a spy.

“I got a message to come for an interview to their headquarters. The war was still on and they decided to send me as a spy to Norway that was still occupied by the Germans,” Meloney said. “I was sent to Scotland to receive special training. It was there I learned to used the little suitcase radio transmitter and practiced sending coded messages on it from Scotland to London.

“Just before we left for Norway we found out our radio transmitter wasn’t working. The British had disabled it because they didn’t want us spying on them and sending messages back to our base in London.

“When the Allies invaded Europe the English were to take Norway away from the Germans and we were supposed to spy on them even though they were on our side.”

Before they left for Nazi-occupied Norway their radio transmitter was functioning.

“We took a small boat across the North Sea toward Norway. It was filled with Norwegian spies. After a week of dodging German submarines we were almost there when they received word the war was over.

“Everyone was delighted, but we continued our voyage to Stavanger, Norway. When we arrived the country was still occupied by German soldiers,” Meloney recalled. “I went on to Oslo and we set up our operation in the home of a Norwegian collaborator.

“My primary job was to spy on England. Even though she was an ally, America wanted to know what she was up to during her occupation of Norway.

“We could send messages back to our base in London every other hour. I would code the messages and give them to the radio operator who would transmit them by Morris Code to England. But the British were over on the other side of town with their spy operation and on the same radio frequency we were sending on. They would hold down the teletype key to disrupt our messages to London because they knew we were spying on them,” he explained.

“The following hour the British would send their messages back to their base in London. We’d do the same thing, hold down the key to screw them up,” Meloney said with a smile. “Then that night we’d all get together and have a big party. We were all big buddies.”

This story was first published in the Charlotte Sun newspaper, Port Charlotte, Florida on Monday, November 28, 2011 and is republished with permission.