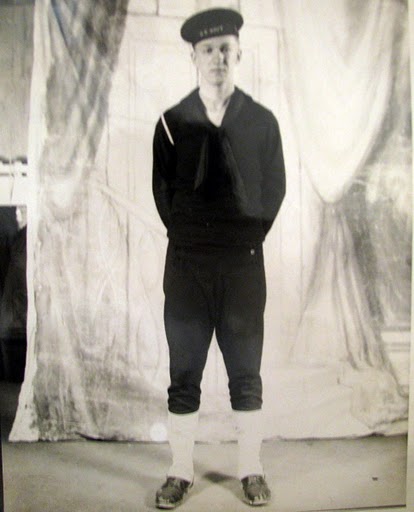 When Eugene “Fuzzy” Fazekas of Spanish Lakes mobile home park in Nokomis, Fla. sailed to war as a corpsman with Naval Advance Group 56 in 1944 he hadn’t been given any medical training.

“During boot camp at Great Lakes we were given aptitude tests. I had had a lot of chemistry in high school and worked in a drugstore after school. I guess they thought I knew enough about medical stuff I didn’t need any additional training,” the 85-year-old former Navy medic explained.

His group sailed for Scotland aboard the ocean liner RMS Aquitania in January 1944. It took them a week to reach Scotland and the European Theatre of War.

Naval Advance Group 56 set up shop in the Royal Victoria Hospital outside Southampton, England. It was a huge 1,000 bed facility built during the reign of Queen Victoria in the middle of the 19th Century. The hospital was an old, three story brick building that that was in poor condition and stretched for a quarter-mile in length.

“I worked in the sick officers quarters and gave my first shot shortly after we arrived. That night when I gave my first shot to an officer, mind you, my hands were shaking,” Fazekas said. “I guess it went okay because he didn’t say anything. I was raring to go after I gave that shot.”

During the seven months he and the 56 Group spent at the Royal Victorian they endured almost daily bombings by the Luftwaffe. Although bombs fell all around the 250 acre park-like area where the hospital was located none of the enemy’s bombs hit the hospital.

This was the Royal Victorian Hospital outside Southampton, England that Eugene Fazekas work at when he served as a Naval corpsman during World War II. Photo provided

“About the most exciting thing that happened to me while I was there, I ended up in the brig on bread and water for three days,” Fazekas said with a smile. “We were 18 years old, my buddy Harry Dunn and I, and we were suppose to be in our quarters by 9 p.m. But it was summer time in England and the sun didn’t set until almost midnight.

“The two of us had been playing baseball and were throwing the ball around in our quarters. The master of arms thought we were going to hit his violin that was hanging on the wall with our baseball so he put us on report,” he said. “We had to appear before the captain and he wanted to know what we were doing. I told him I wasn’t even there. His reply, ‘I don’t believe that.’

“Then he said, ‘We had two choices: ‘You can go on extra duty for the next three months. Or you can go in the brig for three days.’ I took three days in the brig.

“They were going to send me somewhere else after my three days in the brig, but the doctors wanted me back up in the sick officers quarters. So I went back to work up there,” he said.

After the D-Day Invasion, in June 1944, it was obvious there weren’t going to be nearly as many Navy wounded as expected during the invasion of Europe, so the Navy turned the Royal Victorian over to the Army entirely. Naval Advance Group 56 was no longer needed there, so the whole group was sent back to the States in September 1944.

“A bunch of us went to the West Coast aboard the attack transport USS Briscoe and headed for Pearl Harbor and the war in the Pacific. We were aboard the transport for temporary invasion duty at Iwo Jima and Okinawa,” Fazekas said.

“We were all ready to go to Iwo Jima. We were loaded with troops and equipment when the ship broke down. After we landed the troops aboard we were suppose to set up our APA for use as a hospital ship just off shore to handle the wounded.”

It never happened because of the engine problem.

It was at that point that Fazekas was transferred to Naval Hospital 128 at Pearl Harbor where he served out the rest of the war.

“I was on night duty on Aug. 14, 1945. We had the radio on at 2 a.m. and someone came running in the war and yelled, ‘THE WAR IS OVER!’ Somebody had picked up a Japanese broadcast that said they were going to surrender.”

That’s when the partying started.

“In 1950 when the Korean War started I decided to go back in the Navy and make it a career. I enlisted in September 1950, seven years to the day from when I was drafted in World War II,” he said. “I never left the country during the Korean War. I was stationed at the Naval Hospital in Philadelphia and another Naval hospital in Bainbridge, Md. where the Navy had a boot camp.”

Fazekas models a grass skirt he purchased in Pearl Harbor for a niece during World War II. It was used on the cover of his memoirs. Photo provided

By the time the Korean War was over, Fazekas had second thoughts about the Navy as a career and got out of the Navy and went to work for DuPont where he spent the next 20 years until his retirement.

Her husband had died and his wife was gone. They started seeing each other and the rest is history. They’re practically newlyweds, they’ve been married a dozen years.

Until that fateful encounter at the reunion Eugene and Millie hadn’t seen each other since World War II. They both worked in the officer’s sick bay at the Royal Victorian in Southampton, England in 1944. He was a Navy corpsman and she was a Navy nurse.

This story was first printed in the Charlotte Sun newspaper, Port Charlotte, Florida on Thursday, March 24, 2011 and  is republished with permission.

Click here to view Fazekas’Collection in the Library of Congress’ Veterans History Project.

Memorial service will be 2 p.m. Tuesday at Venice Church of the Nazarene. Inurnment will be at Sarasota National Cemetery at a later date. Farley Funeral Home is in charge of arrangements.

Eugene was a Technical Specialist for DuPont in Towanda, Pa. for 19 years, retiring in 1985. He was a veteran of the U.S. Navy, serving during WWII and Korea; member of SNAG 56 (Navy reunion organization), and past president of Towanda Rotary Club. His profession was photography. He had a studio and gift shop for many years in Towanda, Pa.
To send condolences visit http://www.farleyfuneralhome.com.