Lt. j.g. Millie Edsall works with a Navy doctor at the Royal Victoria Hospital in Southampton, England to save the life of a young sailor who was seriously injured when a German land mine he was handling exploded. Photo provided

Millie Edsall was a registered nurse working in a doctor’s office in Joliet, Ill. when the Second World War erupted. At 20, in 1938, she graduated from St. Joseph’s School of Nursing in Joliet.

“I walked in the house and turned on the radio that Sunday after church. There was the President announcing we were at war with the Japanese because of their attack on Pearl Harbor,” the 93-year-old retired R.N., who lives in Spanish Lakes mobile home park in Nokomis, Fla. recalled.

“My brother, Donald, was already in the service. When I started talking about going in too my mother didn’t want to see me leave. So I put it off,” Edsall said. “The next year, in 1942, I joined the Reserve Navy Nurses Corps. I was called to active duty in March 1943.

“I joined Special Naval Advance Group 56 and all of us rendezvoused in January 1944 at a debarkation station on Long Island, N.Y. for shipment to Europe. Some 8,000 Americans boarded the ocean liner HMS Aquitania one night.

“I was the first nurse to step aboard ship and when I did a Navy band, sitting in the corner out of the way, struck up ‘Lady Be Good.’ I almost jumped out of my skin,” she said with a smile.

Millie Edsall is pictured in her winter Navy uniform. She served as a Navy nurse in World War II. Photo provided

“The nurses were assigned state rooms. The cabins were made for one or two people. We had five nurses in our state room. After a week at sea we reached Scotland and the nurses took a 15 hour train ride to London.

“We had two weeks to kill while our Seabees got the hospital in shape for us. The English government wined and dined us while we waited in London. We went to lovely dances and parties. That was lots of fun.

“We were assigned to the Royal Victorian Hospital located in a 250 acre park-like setting just outside Southampton. It had been built around the time of our Civil War, in the mid-1850s, during the reign of Queen Victoria. It was in terrible shape,” Edsall said. “The building itself was built of brick, was a quarter-mile long and three stories tall. It contained 1,000 beds or more. I was a ward nurse and part of the time I worked in the officer’s ward. That’s where I met Gene, my second husband.

“When we arrived at the hospital in mid-February 1944 we immediately began preparing for the D-Day Invasion which we knew was going to take place sometime in 1944.

“The most spectacular thing that happened before the invasion was the accidental detonation of a land mine that involved five Navy men who were taking a little R and R in Southampton. These young sailors were walking along the beach and came across a German anti-personnel mine,” she said.

“One of the sailors said, ‘I can defuse that mine.’ With that he reached down to pick it up and it exploded. By that time two of the five had tried to run off and were 50 yards away, but still got shrapnel in their backs.

“The two sailors that were crowded around the sailor who thought he could disarm the mine were blown to bits. The sailor who created the problem was loaded with shrapnel in his face and body.

“He had extensive surgery and developed peritonitis. He had also lost part of his genitals and part of the inside of his legs. We applied bandages coated with Vaseline and sulfur to his wounds.

“I was one of the three nurses selected to take care of him 24-7 for six weeks. He was a cute 18-year-old kid who was ornery as the dickens,” Edsall noted. “One day he looked up and me and said, ‘Am I going to die?’ ‘No, you’re too mean,’ I replied. 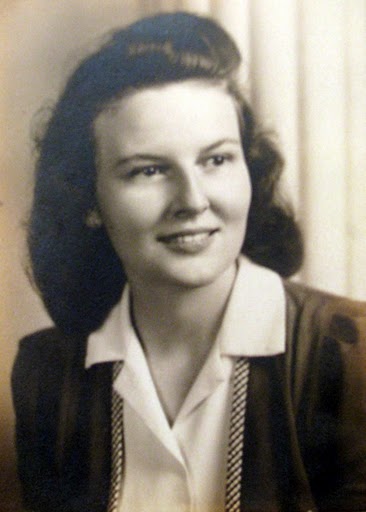 Mildred Edsall pictured in civilian dress in her 20s while serving as a Navy nurse during World War II. Photo provided

“We nursed him to the point of getting him up and in a wheelchair. He was transferred to another hospital in England. From there he was sent back to the States.

“It was very rewarding what we were doing for these kids,” she observed while continuing her story.

“Six weeks before D-Day they started bring all kinds of equipment into our area for shipment out of the port of Southampton. We knew the invasion was getting close because we could see all the equipment coming into town.

“The Port of Southampton was full of Navy ships. They put a moratorium on where we could go. We were confined to our area,” Edsall said.

“The morning of D-Day we knew it was happening because we could hear the drone of airplane engines that never stopped flying overhead. When we got up and opened the blackout curtains the next morning there wasn’t a ship in the harbor.

“We got our first casualties four days later. That first day a young officer with horrific chest wounds was brought in. He had been crawling on the ground on the battle field and crawled over a land mine that went off,” she said. “By the time we got him we were fighting desperately to save his life. But his life just ebbed away.

“That was my first military fatality. It was tough.

“A few days later I was making rounds with a doctor and he was changing dressings on injured sailors. This one young sailor had been hit in the face by shrapnel and his whole head was bandaged.

“When the doctor took off the dressing he had no eyes. He only had holes were his eyes should have been,” Edsall remembered with tears in her eyes. “He said to the doctor, ‘Hey doc, how long is it going to be before I can see?’

“I stood there with tears rolling down my face. The poor man didn’t know he had no eyes and he was never going to see again. Things like this were heart wrenching. War is terrible,” she observed.

After the D-Day Invasion the Navy determined its casualty rate was not as severe as once believed. As a consequence, it consolidated its hospital facilities and gave the Royal Victorian Hospital entirely to the Army.

Special Naval Advance Group 56 was sent back to the U.S. and the group was broken up and used in various locations around the country. Edsall was first dis patched to the Naval Hospital at Great Lakes Naval Receiving Center outside Chicago.

“I was there six weeks not liking it very well. Then I was sent to a Naval dispensary in Madison, Wis. which another nurse and I ran for a year. After that I moved on to the Naval Hospital at Oakland, Calif.,” she said. “It was great duty. We were taking care of casualties from the war in the Pacific. Again we saw some terrible injuries suffered by men who would never have a normal life.

“When a young man died in our care it was sad, but it was even sadder for those young men who had to live out their lives with these terrible injuries,” Edsall said after more than 40 years of nursing and a life of remembrances.

“When the war was over everybody had a high old time and celebrated,” she said.

Millie Edsall is shown in her summer uniform in front of her parents’ home during World War II. She was a Navy nurse. Photo provided

In 1946 Edsall married a pharmacist’s-mate, Erenesto Edsall, she had met in Madison during the war. They had two children: Larry, a journalist who covers auto racing and their younger son, Mark, works as a cost estimator for a construction company that builds highways.

In 1997 Erenesto died. He and Millie had been married for more than 50 years.

Just by chance, in 1998, she was reading an American Legion Magazine and came across an ad that said the British government was inviting all American medical personnel who served at the Royal Victorian Hospital during WW II to a reunion.

“I went back to England at 80 all by myself in the company of 10 other nurses who had been at the hospital during the war,” Edsall said. “We had a wonderful time, spent two weeks there and toured the country after the get-together.

The next year she went to another reunion. This time Special Advance Group 56, her old medical outfit, held the gathering. While there she ran into Eugene Fazekas, a corpsman she served with at the Royal Victorian all those years ago.

His wife had died and her husband had been gone for two years by then. They hit it off and decided to marry. That was 11 years ago.

“I have three grandchildren and nine great-grandchildren,” Edsall said with a faint sigh as she concluded her World War II tale. “It’s been a wonderful life.”

This story was first printed in the Charlotte Sun newspaper, Port Charlotte, Florida on Monday, March 28, 2011.  It is republished with permission.