Pilots and flight crews get ready to launch their collapsible-wing Corsair fighters bunched together at the end of the Salerno Bay’s flight deck. Photo provided

Bob Bolling missed World War II altogether. He signed up for the navy in 1946 right out of high school. After boot camp in Bainbridge, Md. he went aboard the escort carrier USS Salerno Bay, CVE-110, in Norfolk, Va.

When he went aboard ship during the fall of 1946 as a clean-shaven, 18-year-old, seaman III class the carrier was little more one year old. She had been commissioned at the Commercial Iron Works in Portland, Orig. on May 15, 1945, three months before the Japanese surrendered.

The Salerno Bay reached Okinawa and the war zone in late September, the month after the Japanese called it quits. She was anchored in Buckner Bay, off Okinawa, when a major typhoon struck the island.

The crew of the baby carrier, only 575 feet long and 75 feet wide, sailed for Saipan after the big blow. Then on she went to Guam and Pearl Harbor before arriving back in San Diego. The Salerno Bay joined the Atlantic Fleet in December 1945, arriving in Norfolk, her home port, two days before Christmas.

Bob Bolling of North Port, Fla. is pictured aboard the carrier USS Salerno Bay, CVE-110, at 19 in 1946 when she was sailing the Eastern Seaboard of the U.S. after World War II. Photo provided

Her primary duty when Bolling came aboard was to qualify carrier pilots. She operated off the east coast of the U.S. and in the Caribbean during the entire time the young sailor was aboard. He was on the Salerno Bay when she was decommissioned at the Boston Navy Yard in 1947.

“I was an ordinary seaman when I went on the Salerno Bay,” the 82-year-old former sailor said sitting in the living room of this North Port home recalling his days at sea a lifetime ago. “I was an artist on the Bull Horn, the ship’s newspaper, and I had some other duties aboard ship, too.

An anti-aircraft gun crew aboard the USS Salerno Bay prepare to fire their guns. Photo provided

“A lot of sailors were getting out of the service after World War II and kids like me were coming on board,” Bolling said. “I spent 18 months cruising the Atlantic up and down the Eastern Seaboard and into the Caribbean training carrier pilots.

“I wasn’t allowed on deck, but my job aboard ship was kinda a roaming job and often times I was able to get into a position where I could see the planes coming into land.

“It was really a thrill watching those planes land. I loved planes. They had to land just right and get those flaps down or they’d go right off the deck,” he said. “They flew F4U Corsairs and Grumman Avengers. The Avenger was a big plane for a little carrier. I can only think of one time when we lost one pilot.” 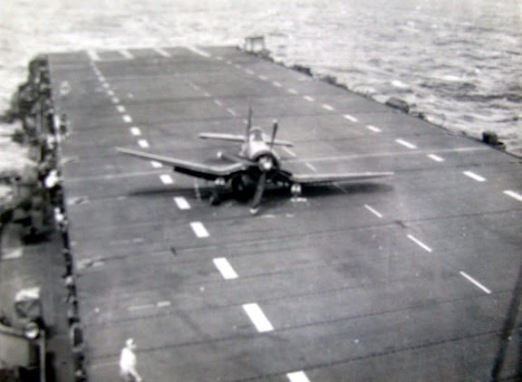 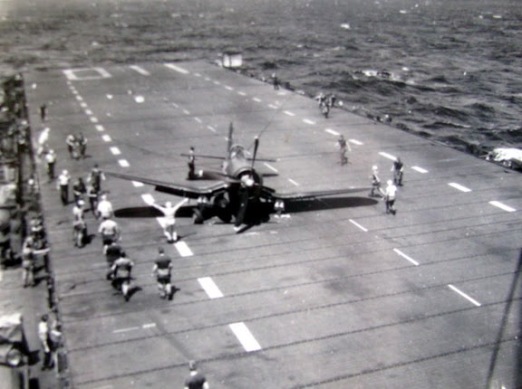 A F4U Corsair gull-winged fighter crashes on the deck of the Salerno Bay during a practice landing. Photos provided

The biggest crisis Bolling survived during his time at sea on the Salerno Bay was during an Atlantic hurricane shortly before he was discharged from the Navy in 1947.

“We had to tie ourselves in our bunks because of all the pounding the ship was taking at sea during the storm,” he said. “It was tough going through the chow line because guys were throwing up because of the rocking and rolling.”

Like millions of servicemen and women before him and after him, when Bolling was discharged from the navy he took the G.I. Bill. It paid for most of his three-year commercial art education at Vesper George Art School in Boston.

“After graduation I eventually got a job in a Hearst newspaper. The Boston Record American, was a popular tabloid in the city. I was a flunky in the the newspaper’s art department. I did everything everyone else didn’t want to do,” he recalled.

“I could see what everyone was doing and I learned from them. I got to do a little art work at the paper and then I found work with a cartoonist who needed an assistant. He was drawing a strip for the Post Syndicate in New York City. When the strip folded a friend helped me get another job with Archie Comic Book Co. in New York.

“It was very difficult for a beginner to get a job with a comic book firm like that. I was both writing and drawing the Archie strip. Getting the writing style was very, very difficult.”

That was more than 50 years ago and Bolling has drawn Archie ever since.

“They tell me what they want and I produce it. Otherwise they give me a script and I draw the characters to fit the script. It’s a two to eight page story, generally about six pages, that I draw for them,” he said. “I can do a page a day.

“I take the special drawing paper they send me and in my home studio I begin with soft pencils and sketch the scene. Then I use a harder pencil to complete it. I send my penciled drawings up to New York where they have people who ink it in. I use to do it all–draw it, letter it and ink the characters in in color,” Bolling explained.

Four years ago, he and his wife, Marianne, moved from Miami to North Port.

“I met my wife in New York City. She was a secretary and we met at a party. We were married in Los Angeles and just celebrated our 52nd anniversary. She’s from California,” he said.

Bolling is pictured at his drafting table in his home studio working on a page for the Archie Comic Book he has helped create for more than 50 years. Sun photo by Don Moore

“I always wanted to be an artist,” Bolling observed looking at decades of cartoon work on the walls of his home. “When I’m not drawing Archie I’m doing paintings in oil. Oil is very forgiving,” he said as he gazed out his living room window at the American flag snapping in the breeze from a flagpole in his front yard.

This story was first published in the Charlotte Sun newspaper, Port Charlotte, Florida on Monday, March 14, 2011and is republished with permission.