Escaping German soldiers plod along a road heading west in their escape from the advancing Russian army at the end of World War II. Photo provided

Pete Self of Englewood was a rifleman in H-Company, 143rd Regiment of the 36 Infantry Division when he first came ashore at Naples, Italy on Sept. 9, 1943 during World War II.

His Texas outfit reached the war zone shortly after the Salerno, Italy invasion, the first Allied thrust into Hitler’s “Fortress Europe,” by Gen. Mark Clark’s 5th U.S,. Army. Thirteen months later he charged ashore at Tropez, in Southern France, as part of Gen. Omar Bradley’s 7th Army. Self and the 36th Division wrapped up the war on May 8, 1945 in Kitzbuhl, Germany with Gen. George Patton’s 3rd Army tanks. 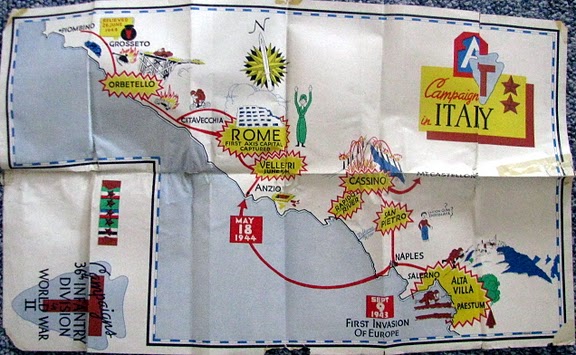 This map, produced after the war, shows the 36th Division’s route from Naples, Italy north to Rome, Florence, Monti Casino, and the Alps. Sun photo by Don Moore

By then the 20-year-old PFC had been seriously wounded by shrapnel shortly after the French invasion, received a Bronze Star Medal for fighting his way across Italy, France and Germany, was awarded four battle stars for taking part in four major campaigns and an arrowhead for the invasion of France. In addition, he wore the Combat Infantryman’s Badge for being under fire.

“We left Camp Wheeler, Ga. and sailed for North Africa in 1943 and from there we went to Naples, Italy and I became a member of H-Company, 143rd Regiment of the 36th Division in Gen. Mark Clark’s 5th Army,” the 85-year-old former soldier said. “Just before we arrived the 5th had fought its way onto the beach at Salerno, Italy. They were in the process of taking the Repito River, north of Naples, when I arrived in Company-H as a replacement soldier.

Some of Self’s buddies in the 36th Division cluster around “Anzio Annie,” the German’s big artillery piece mounted on a railroad flat car. It was used against Allied forces trapped on the beach at Anzio, Italy. Photo provided

“It was one continual fight with the Germans all the way from Naples to Rome. On the way there the Germans put up a terrible fight at Vellertai. Some of our men got into hand-to-hand combat with the enemy,” he said.

The 36 Division took part in the Anzio invasion, on the beach south of Rome. For four months they were trapped on the shore with their backs against the sea. The Germans held the high ground and Mark Clark and his army took a terrible beating before it fought its way off the beach.

What Self remembers most is “Anzio Annie,” the giant German artillery piece mounted on a flatbed rail car that Hitler’s troops used against the American, British and Canadian forces penned down along the sea.

After the Allied breakout out in June 1944, Rome was a piece of cake for the soldiers of the 36th Division.

“Rome was declared an open city when the 5th Army marched in. It was the first Axis capital that Allied forces captured that was controlled by the Germans,” he explained. “It was a beautiful place that had not been hit by either Allied or Axis bombers.

“Immediately after we marched out of Rome it was more of the same–more intense fighting. We pushed the Germans all the way back to Florence. Unlike Rome the German forces were going to have to be run out of the ancient art center in northern Italy.”

Self and the the 5th Army cracked the Axes hold on the north at Monte Casino. The German 10th Army holding the Gustav Line finally gave way and Gen. Mark Clark, who was the commander of all Allied forces in Italy by this time, was finally victorious.

“We were bombing the Germans in the Alps by then. There was no more fight left in them,” Self recalled 65 years later. “We left the Alps and went back to Naples for amphibious training.”

He didn’t know it at the time, but the young infantryman and the 36th Division were about to join Gen. Omar Bradley’s 7th Army and make the invasion of Southern France along the Rivera on Aug. 15, 1944.

“During the invasion I was made the radio operator for our mortar platoon. I carried a 40 pound radio on my back and was one of the first to hit the beach at St. Tropez, France,” he recalled. “The Germans put up a terrible fight during that landing. They fired machine-guns, mortars, rifles and artillery at us as we were coming ashore.

“That’s where I got wounded! I was hit in my left leg by shrapnel from German artillery and I also had a finger cut off,” Self said. “I was bandaged up at a first aid station and shipped off to the 300 General Hospital in Naples. I spent the next 45 days recovering from my wounds.

“I thought I was going to get a break and get sent back to the States. It didn’t work out that way. I was sent back to my unit that was still fighting its way through France,” Self said. “By this time we had the Germans on the run.”

Shortly before his unit crossed the Rhine River into Germany the 36th Division joined Gen. Patton’s 3rd Army. They made the historic river crossing at St. Marie Selestat, Germany.

“It was their last stand. Once we got across the River we pretty much had them whipped,” he said. “By then thousands of German soldiers were walking our way unarmed trying to escape the Russians who were moving against them from the East.”

Pfc. Pete Self is pictured in Kitzbuhl, Germany after World War II. The former 36th Infantry Division soldier was part of the occupation forces after the war. Photo provided

The 36th Division and Self’s mortar platoon ended the war in Kitzbuhl, Germany with some of Patton’s tanks. After the surrender on May 8, 1945 he spent the next six months in Kitzbuhl as part of the occupation force.

“I was a mail clerk for the occupation forces in Kitzbuhl. The town was still in decent shape and the German people were tickled to death the war was over,” Self recalled. “We mostly relaxed and ran around town with good looking German women.”

By early Feb. 1946 he had collected enough points to sail for home. Self left Germany on a troop ship and arrived in Norfolk, Va. nine days later.

“I was 20 when I got off the boat and headed for the bars in Norfolk. A few days later I was discharged and took a train for home. When I got off the train in Cincinnati, Ohio I was 18 miles from my house. My parents were delighted to see me when I walked in the door after hitch-hiking home.”

It wasn’t long before he got a job working for a company in Cincinnati that made paper boxes. For the next 12 years Self worked there until decided to switch careers and attend the police academy.

After graduation he joined the ranks of the Sharonville, Ohio Police Department. This was the town where he grown up. For the next 18 years he served on the force until he retired in 1979.

Self is pictured holding his Purple Heart and a small campaign ribbon with four bronze battle stars and a bronze arrowhead for the Invasion of Southern France. Sun photo by Don Moore

Self and his wife, Jane, moved to the home they built in Englewood that same year. She passed away in 2009 after 63 years of marriage.The couple had two grown daughters, Shirley Self, who was struck and killed by a car, and Vicki Hensley, their youngest daughter, who lives nearby.

This story was first printed in the Charlotte Sun newspaper, Port Charlotte, Florida on Thursday, March 10, 2011 and is republished with permission.