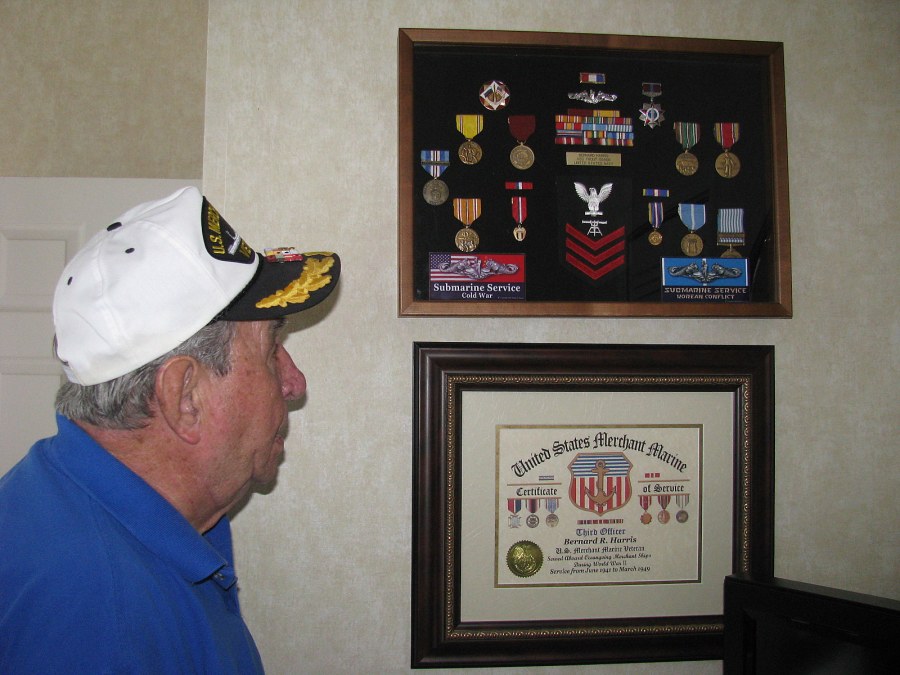 Bernie Harris of Loveland Courtyard condominium in Port Charlotte, Fla. looks at his commendations for serving in the U.S. Merchant Marines during World War II and four years as a submarine sailor, from 1949 to 1953, aboard the USS Trout. Sun photo by Don Moore

Bernie Harris of Loveland Courtyard condominium in Port Charlotte, Fla. made 40 trips across the Atlantic and Pacific during World War II sailing in Esso tankers bringing aviation gasoline and fuel oil to the troops. After the war he joined the Navy and served four years as a submariner aboard the USS Trout—SS-566.

“I graduated from a high school in Reedville, Va. with a class of 28 in June 1941. It was a little fishing village so I grew up around boats,” the 86-year-old said. “My father, who was in the Merchant Marines, took me down to Norfolk, Va. and signed me up, too. There I was a 17-year-old quartermaster steering this passenger ship that sailed between Norfolk and Washington, D.C. I was making $30 per month.

“When the war started I wanted to go into naval aviation and spent the next three months trying to qualify, but washed out on the eye exam. I went back to the Merchant Marines and went to work for Esso sailing aboard a brand new T-2 turbo tanker that could make 15 knots with a full load of 150,000 barrels of fuel oil or gasoline aboard,” he explained.

“On our first trip our tanker rendezvoused in Halifax, Nova Scotia with about 100 other ships that were going to cross the Atlantic in convoy. Because we were in a convoy of old ship we sailed and 6 or 7 knots. We were lucky because we were in a storm that almost blew us out of the water. We finally made our destination in Scotland,” Harris said.

“It was a terrible time for Merchant Mariners in 1942. When we came back from Scotland we made some trips along the Atlantic coast in an unarmed ship sailing just off shore,” he said. “German U-boat skippers called it ‘The Happy Time’ because of all the ships they sunk.

“We would run with no lights sailing past Atlantic City, N.J. that still had all its lights on. U-boat captains would be on our seaward side with the tanker in the middle and the beach community on the shore side. We were silhouetted against the night sky because the lights were still on in Atlantic City. German U-boats sank 246 ships in June along the East Coast of the U.S.,” Harris said.

“In 1943 I went aboard a tanker fuel oil built in 1901 that sailed to Oran, North Africa. Our top speed was 7 knots,” he said. “The Sunday after we arrived, without incident, the Germans attacked the harbor with planes and blew it up. An ammunition ship docked near us was hit and blew up and kept exploding for the next four hours until a French tugboat towed it out in the harbor and a destroyer sunk it.”

It was the last ship in the convoy that was most at risk of being sunk by German or Japanese submarines. “Coffin Corner” is what they called this ship.

“On one convoy I was on, the Germans torpedoed a tanker filled with 150,000 barrels of aviation gasoline. It blew up and 30 second later there was nothing left of the ship,” Harris recalled. “Attacks from U-boats in the Atlantic tapered off when the American navy sent out killer packs consisting of a baby aircraft carrier and couple of destroyers searching for German subs.

By then he was transferred to Esso tankers supplying fuel to troops in the Pacific Theater of Operations.

“I made every single invasion in 1943 and 1944 in the Pacific. We were carrying 150,000 barrels of aviation gasoline and six P-38 fighters planes stacked up in racks on the deck. We hit a storm in the Pacific while zigzagging to elude Japanese subs that were attacking us,” he said.

“I was on deck and told to secure one of the P-38s that was coming lose because of all the pounding the ship was taking from the sea. While turning a turn buckle to secure the plane I was hit by a wave and thrown 40 feet to the deck. When I hit I broke my right leg and sustained other injuries.

“There were no doctors aboard ship so three or four days later I was taken off the tanker at New Guinea and transferred to a jungle hospital where my leg was reset. I spent the next four months recovering from this injury at the front line hospital,” he said. “I sailed home to a San Francisco Hospital in a body cast were I spent additional months recovering. Eventually I got a ticket home to my mother’s house in Baltimore, Md. Shortly after that the war ended.

Looking back on it all some 65 years later the old salt observed, “They couldn’t have won the war without the Merchant Marines.”

Harris went back to the Merchant Marines after the war and spent the next four years delivering fuel oil to the desperate countries in Europe as part of the Marshall Plan that saved Western Europe from Communist domination. In 1949 he lost his job because ESSO put its tanker fleet in mothballs because of new international maritime restrictions.

Like millions of others Harris took the GI Bill, went to college and became a history and guidance councilor at New Britton High School in New Britton, Conn. for 30 years until he returned. He moved to Port Charlotte and bought his condominium in Loveland Courtyard 1996.

Bernie Harris is a member of the Robert J. MacAlvanah Chapter of the American Merchant Marine Association in Port Charlotte.

This story was first printed in the Charlotte Sun newspaper, Port Charlotte, Fla, Monday, Dec. 21, 2009. It is republished with permission.