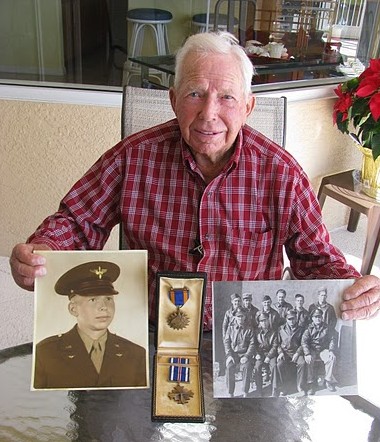 Leslie Nielsen holds two vintage pictures of himself and his B-17 bomber crew. The box in the center contains a Distinguished Flying Cross and an Air Medal he received during his 30 combat missions. Sun photo by Don Moore

It was June 20, 1944 and 1st Lt. Leslie Nielsen was on his 28th combat mission over Nazi occupied Europe during World War II with only two more missions to fly. Their target: an oil refinery in Hamburg, Germany.

One of the four engines on the B-17 bomber he was co-piloting had burst into flames during their approach to the target. They dropped their bombs, managed to extinguish the fire and keep the “Flying Fortress” aloft until they could crash land in the choppy waters of the English Channel.

Nielsen’s diary entries written immediately after every flight picks up his story from there:

Leslie Nielsen is wished good luck by his high school friend Robert Long of Bloomfield, Conn. as he climbs into his B-17 at Kimbolton, England on his way to bomb the Third Reich. Photo provided.

“Our squadron wasn’t suppose to fly this mission, but they needed one more squadron so we were assigned…. We didn’t like the idea because we knew it was going to be a rough mission,” he wrote more than 65 years ago.

“Everything went smoothly until we got on the bomb run and things began to happen fast. A half minute before ‘Bombs Away,’ the number one engine started throwing oil that caused a push rod to destroy the engine, so I feathered the prop. About the same time, number three engine was hit by flak and lost oil pressure. I tried to feather that engine, too, but was unsuccessful. That caused a lot of drag on the plane. Number two engine also was hit by flak and caught fire.

“Flak over the target was the most accurate and concentrated I have ever seen. Our target was a synthetic oil refinery. We got some very good hits on it. Flames and smoke could be seen 15,000 feet high. Reports indicate it was still burning two days later.

“We dropped our bombs and dropped back in the formation. We lost some altitude, but did get the fire put out. With number two and four engines pulling full power, and number three engine windmilling and creating drag, we managed to hold our altitude for nearly two hours.

“During this time we contacted the base and got a fix. We also told them we expected to ditch in the English Channel. Fifty miles from England at 15,000 feet, we lost our number two engine and knew we would have to ditch. We also contacted Air-Sea Rescue and told them our situation so they kept a constant fix on us all the way down.

“All but Jim (Wheat the pilot) and I went back to the radio room to clear out any loose equipment and take ditching stations. We made a good landing in the water only five miles from shore, but the sea was very rough and the ship broke up from the bomb bay back. Jim and I were the first ones out of the plane.

“Staff Sgt. Alvin Carter, the tail gunner, got the life rafts out. We let one get away from us which didn’t help any. Jim got hold of a one-man dingy and got in it. I was first into the big raft and helped (2nd Lt. George) Berner, the bombardier, into the raft because he seemed dizzy and quiet helpless.

During most of his 30 combat missions, Nielsen said he was accompanied to the target by 1,000 or more “Flying Fortresses” like the ones pictured in formation somewhere in Europe during World War II. Photo provided

“We got waist gunner (Staff Sgt. Robert) Mercado, (Tech-Sgt. George) Maisch, the radio operator, and Carter into the raft in that order. All the others stayed in the water hanging onto the raft as I started pumping more air into it and bailing water out.

“An hour after we ditched we sighted the rescue boat coming our way. The British were wonderful. They took us aboard undressed us, dried us off, rubbed us down and dressed us in warm woolen clothes. At the Naval base they gave us a complete G.I. issue of clothes, fed us and did everything to make us comfortable.” 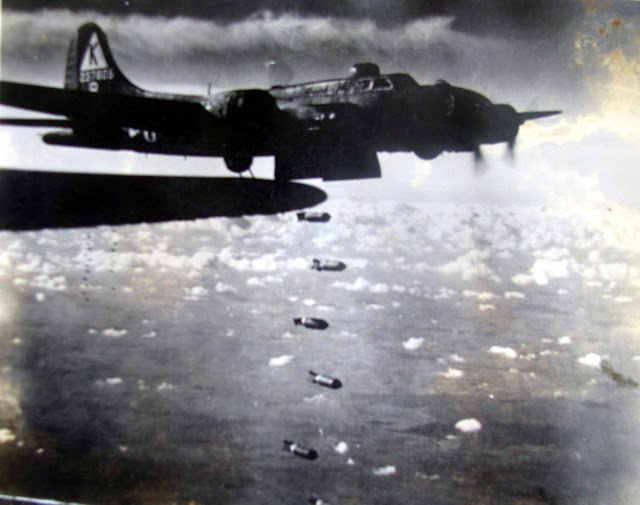 Remembering these experiences a lifetime ago while sitting around a table on the swimming pool patio of his son, David’s, South Gulf Cove home recently, the 94-year-old former B-17 co-pilot said he grew up on a family dairy farm outside Bloomfield, Conn.

“After I read in the paper about the five Sullivan brothers going down on a ship off Guadalcanal in 1942 I made up my mind to join the service even though I was a farmer and had a job deferment,” Nielsen said. “In November 1943 I graduated from flight school in Seymour, Ind. and received my wings. We went to Nebraska got a B-17 and flew from Maine to to Goose Bay, Labrador on to Ice Land and finally England.”

When they reached the UK they became part of the 527th Bomb Squadron, 379th Bomb Group of the 8th Air Force flying out of Kimbolton, England. On their first mission they flew to Brussels on April 10, 1944 on what was suppose to be a “milk run.”

“As we headed out on course the number one engine started to sling oil out the top of the cowling. It looked bad, but we decided to keep going as long as possible,” he wrote in his diary. “While on the bomb run we were dropping back steadily because the windmilling prop on the defective engine was causing a lot of drag. We got rid of our bombs, but we still were unable keep up with the formation. We were all alone flying home, but were fortunate not to have any enemy fighters around.”

Continuing that story a few days ago Nielsen said, “When we were landing the prop on the defective engine came off and went somewhere. I don’t know whatever became of it.”

On a return bomb run from Vienna, Austria during a later mission the squadron was trying to fly under a fog bank settling in along the Channel coast.

“All of a sudden it cleared up and we could see the White Cliffs of Dover. They were up in front of us. As we cleared the cliffs we were almost out of gas. We spotted a fighter base and set down on the air strip. It was really scary,” he said.

By the end of their 30 combat missions the 527th Squadron was flying out of a base near Toulouse, France. This allowed the squadron to reach further into Germany on their bombing runs.

It was at this point Nielsen and his crew flew home from the war in Europe in their unnamed B-17. He spent the remainder of the Second World War flying submarine patrol along the East Coast of the US out of Langley Field, Va.

When the war was over Nielsen returned to the farm. For almost 30 years he ran Chris Nielsen & Sons Dairy. The family had 120 head of Guernsey cattle that provided the milk.

This story was first published in the Charlotte Sun newspaper, Port Charlotte, Fla. on Monday, Jan. 17, 2011 and is republished with permission. 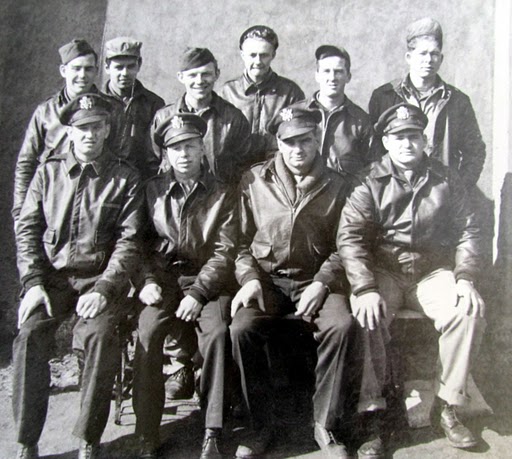 Letter from a former Kimbolton resident
From: Barrie Dunn
Date: Mon, Jan 17, 2011 at 9:20 PM
Subject: Your article about Lt Leslie Nielsen
To: donmoore39@gmail.com

It was a great article to read!
Quite a coincidence – I’m from Portsmouth in England and am here in Englewood on Manasota Key for 10 days vacation. Actually, I’m using these days after a business meeting in Miami, to write a couple of scientific papers. Its so nice an quiet here!

Back to the article!
Lt Nielsen writes that he was stationed at Kimbolton. Well I went to school there from 1954 to 1963, before going to university in London.
Kimbolton school is quite famous, it is housed in a real castle built in the year 1100 and later developed by the Duke of Manchester. It was the last home for Katherine of Aragon, wife of Henry VIII, before she was killed.

Last November 2010, I re-visited the school, Kimbolton airfield, where Lt Nielsen was stationed and took a few photo which are still on my camera today. 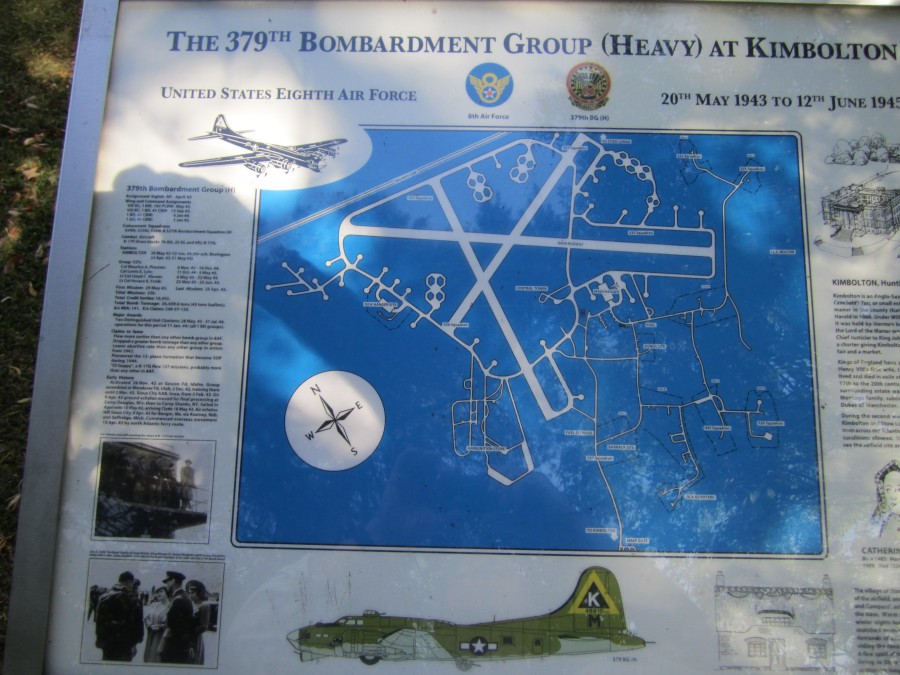 This plaque at Kimbolton School commemorates the fact that Nielsen’s Bomb Group flew their B 17s out of a local airport near the castle during World War II. Photo provided by Barrie Dunn