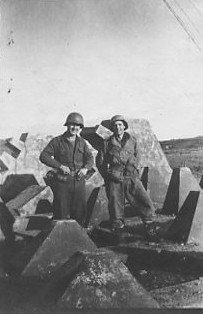 Sgt. Ralph Coffin (left) and a buddy stand at the Siegfried Line near Branshied, Germany during the 274th Field Artillery’s advance across Europe with the 3rd Army during World War II. Photo provided

Ralph Coffin fought all across Europe during World War II with the 274th Armored Artillery Battalion, part of Gen. George S. Patton’s 3rd Army. He landed in Normandy on Aug. 19, 1944 at St. Mere L’Eglise and fought from there to Avaranches and on to the Muese River by Sept. 1 and then to the famed fort at Verdun held by the Germans.

After his battalion help capture the historic French fort along the River Muese the 274th moved on toward Metz and another French stronghold the German’s controlled. “The Germans stopped us dead at Metz,” said the 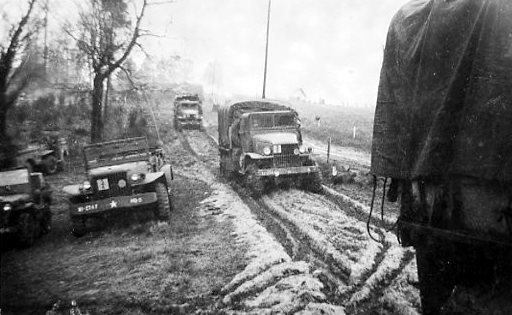 The weather was a big factor during the time the 274th Field Artillery fought the Germans across Europe during World War II. Here Coffin’s unit slogs its way through the mud with deuce-and-a-half trucks. Photo provided

85-year-old former artilleryman who now lives in Deep Creek. “It was at Metz our unit got on the wrong side of a hill and we were hit by German artillery. We lost one of our men there. It was at Metz, Patton ran out of fuel.

Eisenhower gave all the fuel and ammunition to Gen. Montgomery and the English 8th Army. Patton was mad as hell,” the old soldier recalled. Coffin’s battalion was comprised of 18 mechanized 105 millimeter guns mounted on M-7 tank-like vehicles. They fired 104,319 cannon rounds in their Howitzers during World War II, according to a battalion history.

He was a communication sergeant who helped provide the radio connection between the battalion commander, his guns and the unit they were attached to during a particular battle. Before the war was over the 274th fought in 19 major battles, including the Battle of the Bulge, breaking through the Siegfried Line that protected Germany from intruders and then from city-to-city throughout the “Fatherland.” On Sept. 16, 1944 his battalion finally crossed the Moselle River at Metz, France. Dead German soldiers littered the battlefield but their unit kept on moving forward. This was Gen. Patton’s strategy to keep the Germans off balance by continually attacking.

“It was cold as hell and it took the 274th 24 hours to reach the Ardennes Forest and the battle,” Coffin recalled. “We were bumper-to-bumper on a narrow, high crown dirt road covered with snow. It was treacherous, particularly at night, during 3rd Army’s return south to Belgium. “As we reached the forest near Bastogne where the American 101st Airborne was surrounded, German 88s (cannons) in some building on the road we were on fired on us. We had to take ‘em out with our 105s before we moved on,” he explained.

“When we first went into the Ardennes with our guns we got in trouble. The Germans were waiting for us. They slowed us down and eventually stopped us with their 88s that were zeroed in on us,” Coffin said. “We had to turn around and get out of there. We reached the edge of the forest where a little house stood. An 88 shell went right beside the half track I was in and struck the house disintegrating it.” 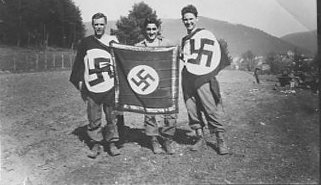 It wasn’t long before the 274th retraced its steps and this time went further into the Ardennes. It was a man made forest where trees were planted in even rows every few feet. In order to move forward their battalion had to clear a path through the woods.

Two days after Christmas the 4th Armored Division, with the support of our 274th Battalion, broke through to the 101st Airborne troops that had been trapped for some time,” Coffin said. The weather cleared right after Christmas and the Allied air force took to the sky again putting the Germans on the defensive. Coffin and the 274th moved forward in support of the 4th Armored Division. 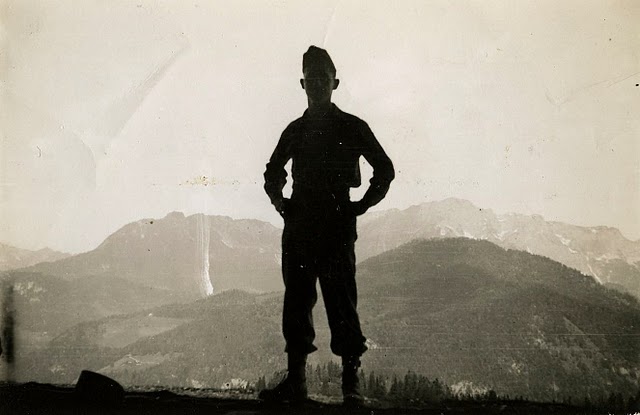 Ralph Coffin stands in silhouette where the picture window was at Hitler’s Eagle’s Nest retreat in the Bavarian Alps. Someone shot out the window before his unit arrived to check out the place. Photo provided

A short time later the 274th was attached to the 11th Armored Division and continued its fight with the Germans eastward. They reached Vissouc, Belgium where the Germans had first begun their breakout at the Bulge. The American forces continued on into Germany. The much touted Siegfried Line was reached by the 274th at Borg, Germany. Coffin said the enemy’s major defensive stronghold along the western boarder of German didn’t amount to much, except for the concrete pillboxes that were nearly impregnable.

“We were supporting the XX Corps. Shells from our 105 mm guns just bounced off the pillboxes,” he recalled. “We had to bring in other guns to take them out.”

They crossed the Rhine River near Nierstein, Germany and continued eastward. The American 3rd Army went through town after town in Germany as fast as possible with little resistance. By April 27 they reached the Danube River and crossed into Austria.

It was there on May 8, 1945 the soldiers of the 274th Armored Field Artillery Battalion got the word they had been waiting for. The Reich had “unconditionally surrendered” to the Allies. World War II in Europe was over.

The battalion’s soldiers celebrated by making a trip to Berchtesgarden and Hitler’s “Eagle’s Nest” retreat in the Bavarian Alps. 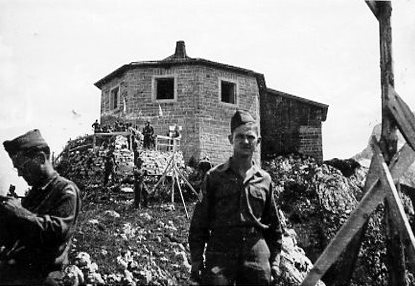 This octagonal stone look-out post was atop the mountain that included Hitler’s Eagle’s Nest in the Bavarian Alps. Photo provided.

“By the time we arrived the place was pretty well destroyed,” Coffin said. “I remember standing where the picture window at the end of Hitler’s living room had been looking out over the Alps. The plate glass window was gone, it had been shot out. At the other end of the living room was a fire place that was big enough to walk into.”

Like thousands of other servicemen before him and after him, Coffin and his unit went by train and truck to Le Havre, France and “Camp Lucky Strike” to begin preparing for the trip back to the USA.

They sailed aboard the troop ship Sea Tiger on July 30, 1945. Newport News, Va. came into sight for the 2,500 soldiers aboard ship on July 10. After a special dinner at Fort Patrick Henry, Va. the troops of the 274th were discharged. Their war was over.

Coffin went back to Indianapolis where he worked at several jobs. Eventually he went to work for Chrysler and 274th held a managerial position for decades until he and his wife, Brenda, retired to Punta Gorda in the mid-1980s.

Editor’s Note: Some of the details concerning the travels of Coffin’s unit through Europe during World War II were taken from Longneck, a history of the 274th Armored Field Artillery Battalion, written by men in his unit after the war.

This story was first printed in the Charlotte Sun newspaper, Port Charlotte, Florida on Monday, September 13, 2010 and is republished with permission.

92, of Lakeland, passed away on November 26, 2017. He was born in Indianapolis, Indiana to Charles and Katherine Coffin. Ralph served in the United States Army during WWII in Germany. He retired from Chrysler as a Staff Executive after 31 years. Ralph is preceded in death by his son: Ronald C Coffin, his ten siblings, and parents.

Ralph is survived by his loving wife of 49 years Brenda Brookshire Coffin, sons: Garry and Michael and their families, along with a host of other family and friends.

Published in the The Indianapolis Star on Dec. 3, 2017