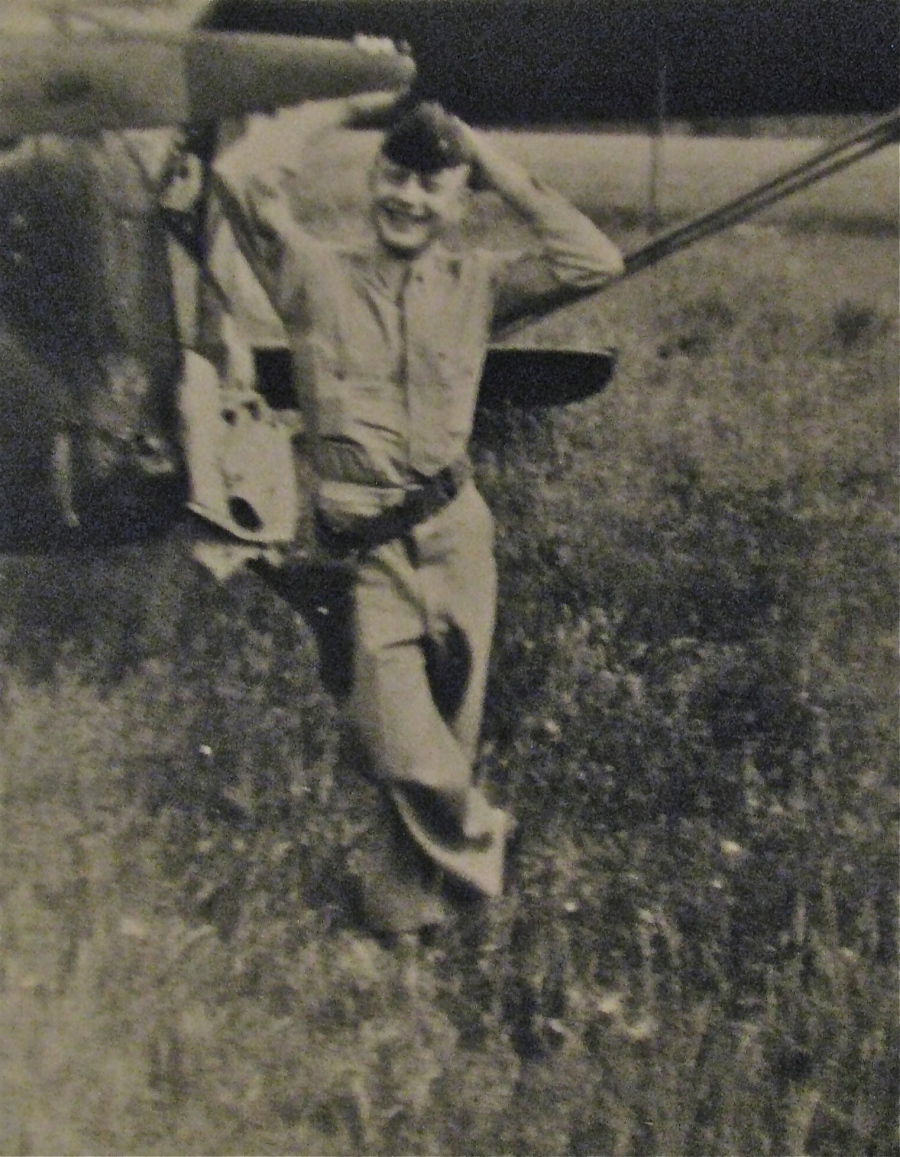 Second Lt. Dave Youngs hams it up for the camera while flying on a patrol with one of the spotter-plane pilots in Austria furing World War II. Photo provided

Second Lt. Dave Youngs hams it up for the camera while flying on a patrol with one of the spotter-plane pilots in Austria furing World War II. Photo provided

Dave Youngs turned mechanics into cooks when he wasn’t playing bridge, skiing and sightseeing around Europe on the weekends at the end of the Second World War.

The youthful 2nd lieutenant was a member of the occupation troops with the 24th Cavalry Squadron based in Bad Schallenbach, Austria, near the close of the war. He was a personnel officer because he learned to type in high school.

Youngs was drafted in May 1944, a week after he married his wife, Marijane. His folks owned a 400-acre farm near Kent, Ohio. It was about 60 miles from Columbus. The farm had been in the family for more than 100 years.

“After basic I was sent to Fort Riley, Kan., because I was a farm boy and they thought I knew a lot about horses. Fort Riley was the U.S. Cavalry’s headquarters,” said Youngs, now 79 and living in Port Charlotte, Fla. “I never saw a horse the whole time I was at Riley. I drove a Jeep. I went to clerk’s school there when they found out I could type.”

Officer and a gentleman

His new wife came with him to Kansas. She became the nanny for an Army captain who took a shine to Youngs. He got him signed up for Officers Candidate School at Fort Knox, Ky.

“Ninety days later I was a 2nd lieutenant in the personnel section. I was sent back to Fort Riley to run a separation center for officers who were getting out of the service at the end of the war. I had a bunch of secretaries working for me, and I wasn’t even 21.”

A while later, Youngs was shipped overseas. He wound up in Linz, Austria.

“I quickly realized I was working with soldiers over there who had been through combat. They were tough and not likely to take orders from a brand-new 2nd lieutenant,” he recalled with a smile. “I knew a lot of 2nd lieutenants didn’t survive because they were shot by their own men. I had to keep my nose clean.”

Youngs found out he could make points with his men if he let them write their own weekend passes. He provided them the blank passes and let them forge his name on them.

“I told them right off, ‘The first one of you who screws up, I’m gonna have you in jail,'” he said. “I never had a bit of trouble with any of them. I had an excellent relationship with my enlisted men.”

Youngs struck up a friendship with another 2nd lieutenant who happened to be a doctor. He was a photo nut who liked to travel. So Youngs and his pal, the doctor, would make the rounds of the Austrian ski resorts, skiing during the day and playing bridge at night. It was a tough life, he said with a grin.

On a more serious note, Youngs made regular flights in and out of Vienna, Austria, where the headquarters for their division was located. He would fly in with an attaché case chained to his wrist filled with secret documents.

“It was an hour flight aboard an L-5 single-engine plane from Linz to Vienna,” he said. “Austria was cut up like a pie. Each of the Allied powers had their slice of the country — Americans, British, French and Russian zones.”

“On one trip I noticed there was a Russian plane following us. I tapped the pilot on the shoulder and pointed to the Russian plane. He checked his map and discovered we had wandered out of the fly zone. We quickly got back into the right area,” Youngs said.

“The pilot told me later, if he had gotten shot down they would have never found us because we were flying over the Alps,” he said.

On another occasion they were flying in and out on a serpentine blacktop runway along the Danube River in Vienna.

“We had to land and take off on a curve when coming in and out of this runway. One day we were taking off and a crosswind caught us and blew us out over the Danube.

“Right in front of us was a huge bridge that spanned the river. We lacked the power to climb up over it because we were too close. So the pilot went under it. You couldn’t do that today without losing your license,” Youngs said.

It was the day before the Fourth of July 1946 when he got a call from the guy who flew him around the country in the L-5, Piper Cub-like single-engine, two-seater plane.

“‘Tomorrow’s the Fourth and we’re off. Would you like to go flying?’ he inquired. I told him, ‘Sure. Let’s go to Berchtesgarden (Hitler’s mountain retreat),’ Youngs said.

“We left early in the morning and flew to Salzburg, Austria. Then we turned left and headed for the mountain getaway,” he said. “Salzberg was 30 or 40 miles away and Berchtesgarden was another 30 or 40 miles. It took us an hour or so to get there in our L-5.

“Our maps weren’t too good. My pilot wasn’t exactly sure where we were going. When we got near, he told me, ‘I think this is the right valley.’ We flew into the valley and were about at the point we had to turn around when we spotted a grass strip below us and landed,” Youngs said. 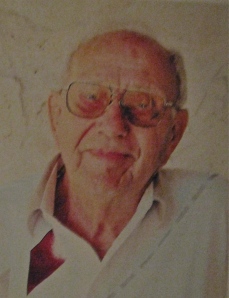 Youngs at the time of this interview, as he recalled his days as a typist during World War II. Sun photo by Don Moore

“We were met at the end of the strip by a (Women’s Army Corps) corporal in a Jeep,” he recalled. “At first they thought we were a couple of generals but they soon found out we were just a couple of 2nd lieutenants out for a good time on a Fourth of July weekend.”

It made no difference. Their WAC guide gave them the grand tour of Berchtesgarden and the Fuhrer’s mountain retreat. The U.S. Army had just taken over the place about a month earlier. The area still showed the ravages of war.

Youngs and his pilot were motored into Berchtesgarden by the WAC. It was a small Alpine town that was primarily a base for some of Hitler’s SS troops who guarded his “Eagle’s Nest” high above.

“Our guide took us to eat in Hitler’s personal dining room in a hotel at the entrance to his retreat,” he said. “We were served on gold dishes with gold silverware and gold glasses. There was even a gold chandelier and the walls were paneled in dark wood with massive wooden tables and comfortable wooden chairs,” Youngs said.

“It’s hard to describe 60 years later, but it was fabulous,” as far as the Ohio farm boy was concerned. After lunch their guide drove them up a winding road to Hitler’s mountain lodge.

“There was a big picture window in the living room of his home,” Youngs said. “You could see seven different countries from there.”

A steel door could be closed in front of the windows that turned the home, which was built into the mountain, into a bomb shelter.

“The place was pretty well bombed out. The glass window was broken and they hadn’t even cleaned up the glass on the floor yet. There was no furniture left in the room. It was like someone had thrown a hand grenade in there,” Youngs said.

After quickly looking around what was left of the Fuhrer’s place, they climbed back in their Jeep and headed up a blacktop road a short distance to the entrance of a tunnel.

“The tunnel was lined with light-colored tile and well lit,” he recalled. “It led back to an elevator 300 feet into the rock mountain at the end of the tunnel.

“The elevator was very plush, with a gold-finished interior and seats for 10 people. It took us up to the ‘Eagle’s Nest,’ Hitler’s viewing terrace 200 or 300 feet above the house at the top of the mountain.”

There was a flat stone wall terrace that the Fuhrer could use to survey his domain in all directions.

“We kinda had the whole Eagle’s Nest to ourselves. We got the red carpet treatment,” he said.

By that time it was getting to be afternoon, and Youngs and his pilot buddy needed to head back to Linz before dark. Their plane had no lights and despite the fact it was early July, there was still snow on the mountains.

As they got back into their two-seater plane and climbed off the valley’s grass runway, Youngs asked the pilot if he could take a spin over the top of the Eagle’s Nest so he could take a couple of pictures from the air. 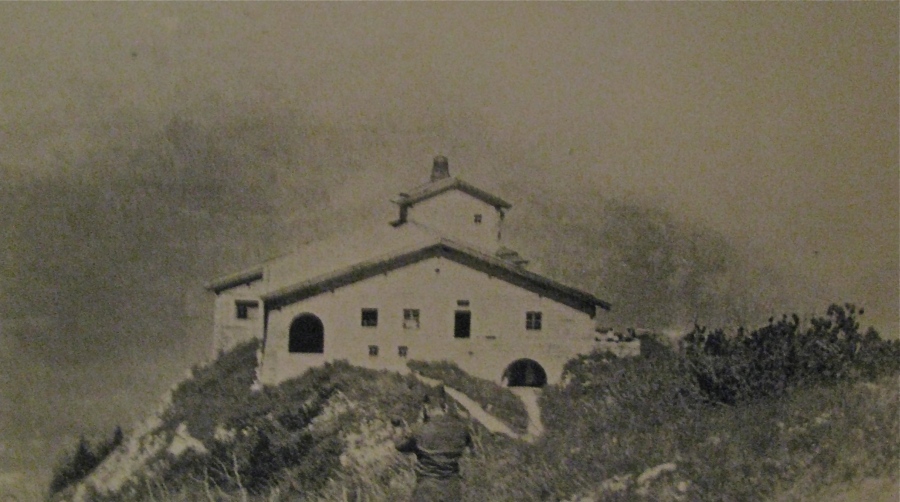 Youngs visited Hitler’s Alps getaway in Austria shortly after it was captured by American soldiers during the closing days of World War II. Photo provided

“The valley was probably 8,000 feet or more, and the L-5 only had a 10,000-foot ceiling. We circled and circled around in the valley and after a while the pilot said, ‘You’d better take your damn pictures because we can’t get any higher.'”

The Eagle’s Nest was still above them.

Later Youngs learned that the mountain was honeycombed with tunnels that had been filled with Hitler’s SS troops during the war. When the Allied forces attacked the area, they entombed the Nazi elite by closing the entranceways with rocks, sealing them inside.

It was shortly after he visited Hitler’s mountain getaway that Youngs learned his father was dying from cancer. He was released from the service and allowed to return to the States, where he took over the operation of the farm that has now been in the family for more than 150 years.

He still owns the farm, but most of his entire working career was spent as the owner of an Ohio-based heating and air-conditioning business. He and Marijane will be married 60 years next year.

This story was first published in the Charlotte Sun newspaper, Port Charlotte, Fla. on  Dec. 23, 2003 and is republished with permission.