Fred Butts, a Cape Cod industrialist who wintered in Boca Grande, Florida, was thought to be the first American soldier to loot Adolf Hitler’s Eagle’s Nest retreat high atop Kehlstein Mountain in the Bavarian Alps near Berchtesgaden at the close of World War II. Sixty years later, shortly before his death, he told his family the story which they captured on tape.

Here is his story in his own words.

“My name is Fred Butts. During World War II I was a platoon sergeant in Company B, 2nd Platoon, 290th Engineering Battalion. On May 17, 1945 I became the first GI to break into Hitler’s chalet they called The Eagle’s Nest.

“Our unit was attached to the French 2nd Armored Division and we were outside of Berchtesgaden on May 16, 1945. Because I could speak a little French my platoon was sent into the town with the armored division.

“World War II in Europe had ended a few days earlier. What was left of the German Army in Bavaria was retreating. Hundreds of German soldiers were walking aimlessly along the roads west away from the advancing Russian Army.

“We rolled into town in six by sixes (Army trucks) early in the morning. French soldiers were running around looting everything in sight and getting drunk. It was total confusion. No order no nothing.

“From Berchtesgaden I could see The Eagle’s Nest atop the 7,500-foot mountain that was covered with snow even in May The next day myself and a French soldier, I didn’t even know his name, decided to climb up to Hitler’s nest.

“After a couple of hours of climbing the mountain and going through several tunnels carved through the rock the French soldier and I could see The Eagle’s Nest a couple hundred feet above us There was no one else around, just us. 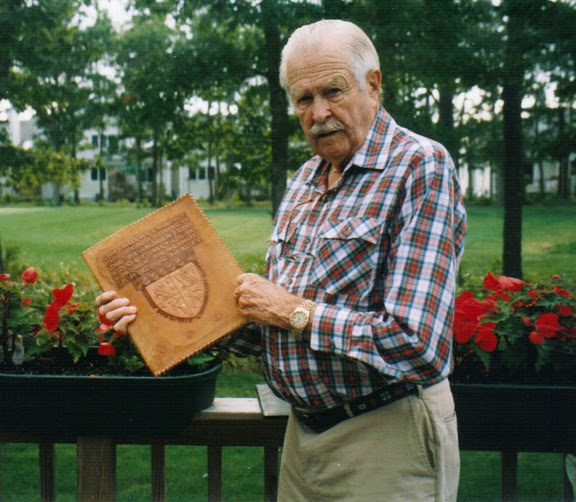 This special leather-bound phone book was Hitler’s. Fred Butts took it out of the Furhrer’s living room while serving in an American engineering battalion that looted his Eagle’s Nest retreat. Photo by Mark Futch

“We walked through knee-deep snow the last few hundred feet to Hitler’s house. We tried all the doors, but they were securely locked. I took out my .45 pistol and broke a rear window, reached inside and unlocked the door.

“The French soldier and I went inside. We found a house that had been put to bed for the winter. All the chairs and tables had covers on them. It was very evident no one had lived there since the proceeding fall.

“We went through The Eagle’s Nest looking for things to take, because by then we were pretty good looters.

“The main room was octagonal with six huge windows on all sides. The windows were 10 to 12-feet wide and 8 to 10 feet high. They were so well-constructed you could raise or lower the bottom half of each window with almost no effort.

The main room with all the windows must have been 50-feet in diameter. A few steps took you to an L-shaped room that had a huge fireplace at one end. The short end of the L contained a mahogany desk with a chair.

“A tapestry covered the desk. There was a phone book and telephone and nothing else on the desk. I took the tapestry and the embossed leather-covered phone book that was made especially for Hitler. I brought both of them back to the United States from the war. 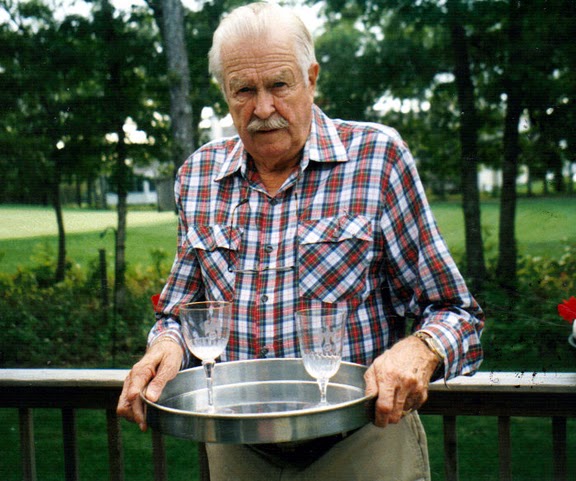 The two monogrammed wine glasses and the stainless steel tray Butts is holding once belonged to Adolf Hitler. He stole them from The Eagle’s Nest, Hitler’s Bavarian retreat at the end of World War II. Photo by Mark Futch

“The nearby bedroom was very sparse. It contained a single bed, a chair and a chest of drawers. The bed was covered with a camel’s hair blanket. I took the blanket and brought it home with me.

“The kitchen and storage room had all sorts of cooking utensils, china and serving dishes. There were very fine crystal glasses with the Nazi eagle on them and the letters A on one side of the glass and H on the other.

“I also found a large stainless steel serving tray, a key to the front door and a couple of awards presented to Hitler by the mayors of various German towns that I took. They were in specially designed folders making him an honorary citizen of the particular town.

“I pulled a sheet off Hitler’s bed, wrapped my loot in it, and threw it over my shoulder. As we started to head down the mountain a couple of newspaper reporters and several more American soldiers arrived at The Eagle’s Nest.

“Up on the mountain there were storage areas for The Eagle’s Nest. They contained some of the finest wines and liquors you ever heard of. There were also 20 or 30 cartons of Lucky Strike cigarettes in one storage room.

“By the time I got my loot down the mountain most of the wine glasses with Hitler’s initials on them were broken. People have asked how we got all the stuff home. Two of the lieutenants in our battalion were being reassigned directly to the war in the Pacific. We used their foot lockers to get the stolen stuff back to the USA.

“The town of Berchtesgaden wasn’t very large, but it contained some magnificent homes owned by the big wigs in the Nazi party. People like Goering and Joseph Goebbels, Hitler’s propaganda minister, both had homes there. Hitler also had a house, down the mountain in Berchtesgaden that had been badly damaged by bombs dropped by the British Royal Air Force. 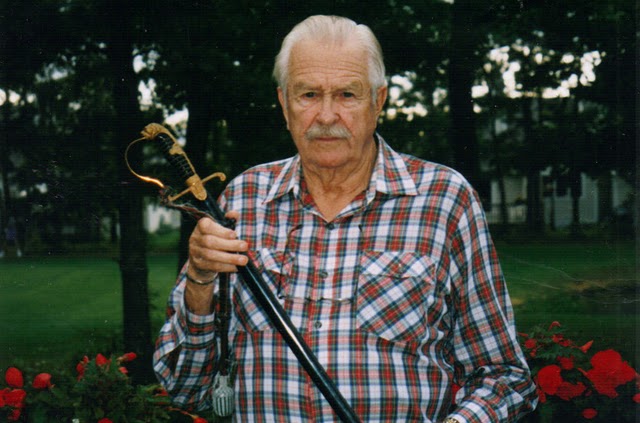 Butts holds a gold-hilted sword he took from Field Marshal Hermann Goering’s retreat in Berchtesgaden, Bavaria during the end of the Second World War. Photo by Mark Futch

“I also broke into Goering’s house and took a sword with a gold hilt. I suppose it belonged to the field marshal, but I couldn’t prove it.

“The 101st Airborne Division is credited with capturing Berchtesgaden. However, the French 2nd Armored Division we were with came into the town from the other end at the same time.

“I don’t know which division got there first. I do know the 101st took over the town and The Eagle’s Nest and managed both after the war as occupation troops.”

This story first appeared in print in the Charlotte Sun newspaper, Port Charlotte, Fla. on Monday, September 27, 2010 and is republished with permission.