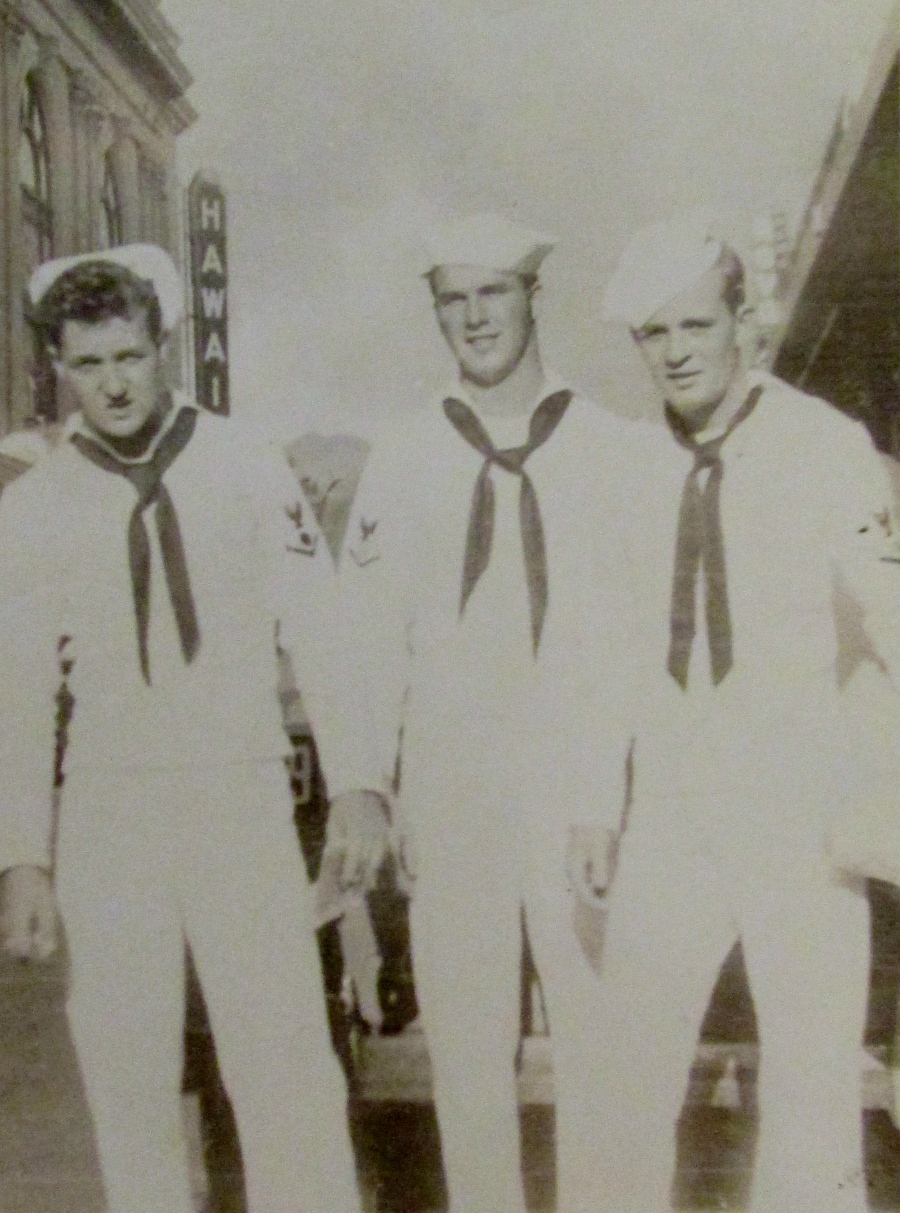 The war is over and RM-C/1 Sandy Dunn (right) is on liberty walking down the main drag in Honolulu with “Johnny” and “Wisp," two of his best buddies . They were returning home from Leyte in the Philippines at the end of World War II. Photo provided

A couple of days before Radioman 1/C Sandy Dunn of Chestnut Creek Subdivision in Venice, Fla. joined the crew of the USS Achilles (ARL-41 repair ship) during the Philippine Invasion on Nov. 12, 1944 while anchored in San Pedro Bay the fleet was attacked by Japanese kamikazes.

“Three Jap ‘Zakes’ surged out of the clouds into the open. The word to the forward guns to ‘commence firing’ was given at once. The first plane passed by, the second plane dove straight at the Achilles,” Dunn noted in his ‘Short History of USS Achilles.’

“The forward guns were firing as rapidly as possible and hits were visible, but still he kept on the dive. The men stayed at their guns and followed the plane down all the way. it was only a matter of seconds since the action began when the plane dived into the ship with terrific speed. The explosion was deafening and the burning orange-red flame seemed to sweep across the whole weather deck of the ship. The plane was blown to bits and bodies were thrown in every direction…. 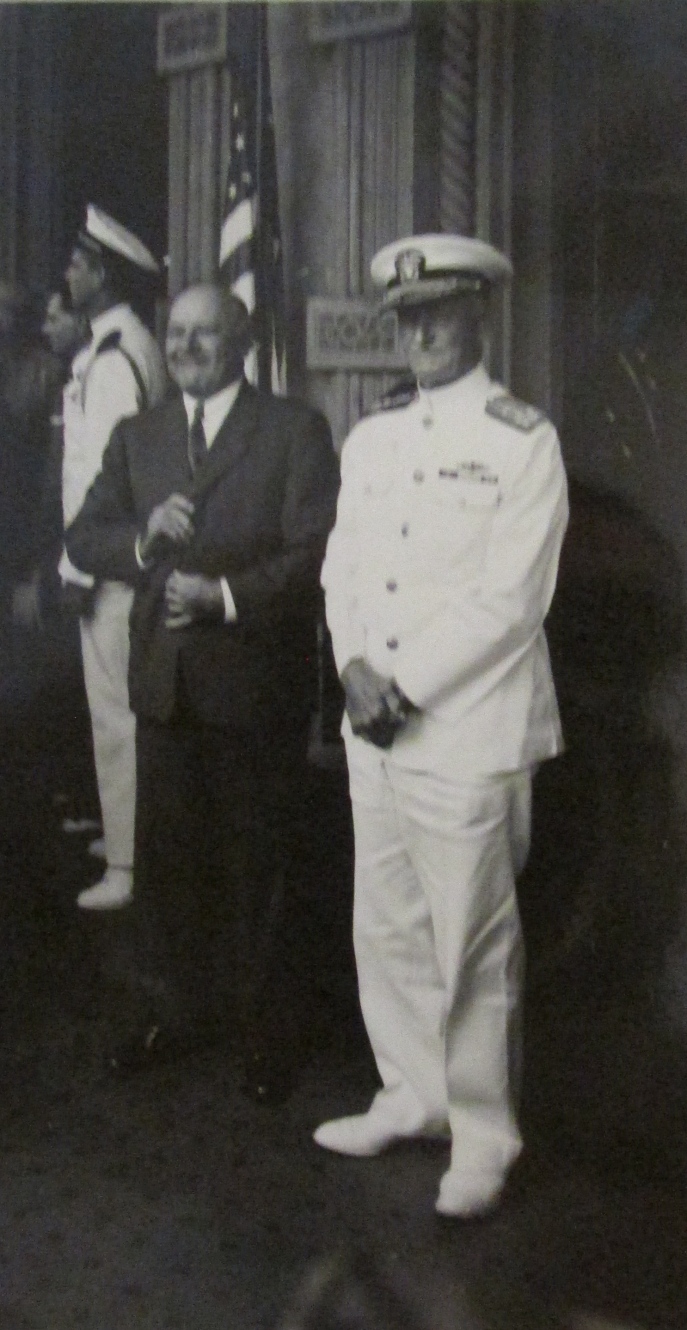 Fleet Commander Chester Nimitz is getting prepared to speak at an event in Pearl Harbor after the war that Sandy Dunn attended. Photo provided

“Nineteen men were killed an 14 were missing. An additional 28 were wounded in the attack. They were transferred to other ships for medical attention,” Dunn wrote in his report on the Achilles.

“Moments after the shock of the explosion was over the fire fighting parties went to work. The main deck at the point of the hit was torn open and what was left of the plane’s engine had penetrated below deck. There were fires in all the areas of the hit on the main deck and below deck. Several hours later the fires were under control. By sunset all fires had been put out.”

Two days later Dunn came aboard the badly-damaged Achilles repair ship still anchored off the beach near Samar in San Pedro Bay. After the final repairs on their damaged ship were completed at New Guinea, he and his shipmates were involved in one of the last invasions of the war when Australian troops came ashore on the island of Borneo with Gen. Douglas MacArthur in command.

It was the last major battle in the southwest Pacific. Maj. Gen. Leslie Moorhead invasion forces brought his Australian 1st Corps ashore on May 1, 1945 and attacked the Japanese troops holding the island. The last amphibious assault took place when the Australians came ashore at Balikpapan on July 1, 1945.

“We took the Australians onto the beach and they did the invasion,” Dunn recalled. “I was in the radio shack when a Japanese plane flew over and dropped two bombs that missed us by 60 feet. When they exploded you could feel our ship going up and down and smell the burned powder from the exploding bombs.

“We stayed down there off the coast of Borneo for a couple of months repairing landing craft. The war wasn’t quite over. Then we went back to Leyte in the Philippines to prepare for the invasion of the Japanese home islands. 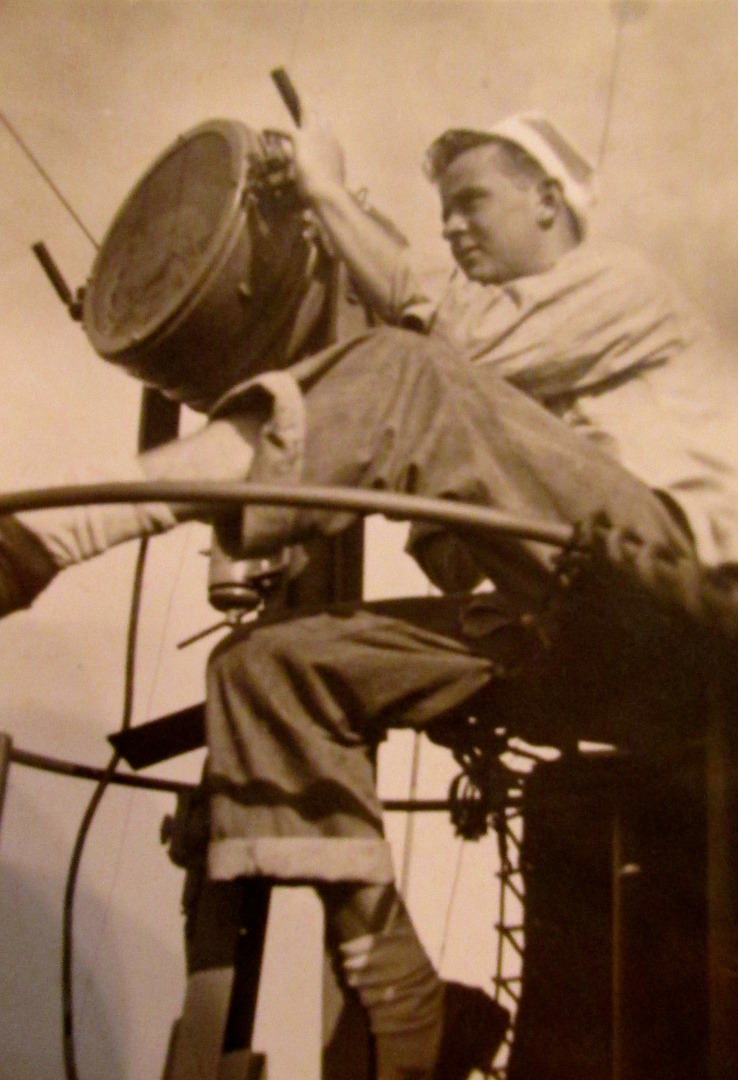 Dunn is pictured on a signal light aboard the USS Achilles (RML-41) during the Second World War. Photo provided

“Our fleet was comprised of hundreds of ships. The picture was very grim because we all knew the next stop was Japan,” he said. “Then we dropped a couple of atomic bombs and after that the Japanese said they were going to surrender. Our ships fired all the tracer bullets they had in the air that night celebrating the pending surrender. I heard rumors eight of our guys were killed aboard ship celebrating the surrender.”

After the official surrender aboard the Battleship Missouri on Sept. 2, 1945 in Tokyo Bay, Dunn and his crew sailed the Achilles back to the States and decommissioned her in New Orleans. It took a slow train three days to get him back home to Williamsburg, Pa.

“I got home Sunday night and Monday morning I went to Altoona, Pa. and put my application in for a job at Bell Telephone,” he said. “Twenty years later I retired from Bell as a project engineer.” After that he went back to work for seven more years as a private employee of the phone company.

Dunn has four children from a first marriage: Victoria, Jeffrey, Edward and Steve.

A few years ago Dunn married Peggy. For 20 years, after his retirement from Bell, he worked as a tour guide for Tracks RV Tours. By the time he reached 80 Dunn and Peggy had toured six of the seven contacts in RVs. The couple moved to Venice and retired in 1996.

“I think every day while I was in the service was a new adventure,” he said. “For an 18-year-old coming out a small town of 1,200 people, World War II was something else.”

This story was first published in the Charlotte Sun newspaper, Port Charlotte, Fla. on Monday, May 1, 2017 and is republished with permission.