Fred Rieger and his three older brothers all served in the Navy in World War II. Howard at the far left enlisted the day after Pearl Harbor was attacked. Walter served on a sub, Robert was on an LST and Fred, at the far right, spent the last few months of the war on a minesweeper. Photo provided

By the time Fred Rieger of Oyster Creek subdivision in Englewood, Fla.. joined the Navy on April 2, 1945 three of his older brothers were already sailors serving in World War II.

“Howard signed up the day after Pearl Harbor was bombed by the Japanese on Dec. 7, 1941,” the 89-year-old former Navy RADAR operator said. “He served aboard a destroyer escorting troop ships and supply ships across the Atlantic during the war.

“Walter was an officer aboard the sub USS Muskellunge (SS-262). Robert served as a lieutenant j.g. aboard and LST (Landing Ship Tank) transport in the Pacific during the war. “

Fred had to wait until he was 18 to sign up for the Navy. His mother refused to let him join when he was 17. She felt she had done her part for the war effort. Her three older sons were already in the Navy.

By the time Fred was 17 he had graduated from high school and during all of 1944 he attended Albion College, a small Methodist school. During the day he went to class and then he worked the night shift at a bomb assembly plant.

After boot camp at Great Lakes Receiving Center near Chicago, Rieger and a train full of 18-year-old sailors rode the rails all the way to San Diego. It was the trip of a lifetime for these young men.

“I remember ’Sentimental Journey’ was the most popular song of the day on that train ride,” he said. “We ended up in San Francisco and went aboard the Battleship Pennsylvania. She was in dry dock at Pearl when the Japanese attacked and did not sustain any serious damage in the initial battle of the war for the U.S. 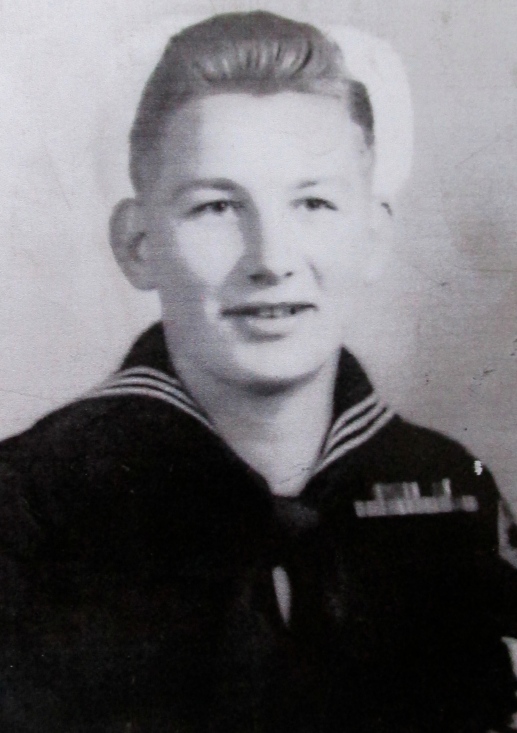 Fred at 18 when he graduated from boot camp at Great Lakes in 1945. Photo provided

“They didn’t have much room for us. There were already 1,500 sailors aboard ship when we showed up,” Rieger recalled. “We were passengers not crew so there were no bunks for us aboard the Pennsylvania. That first night I hung my hammock three decks down and fell out of it my first night at sea.

“The next night I took my blanket and slept under the gun mounts on deck. The next morning flying fish hit me and woke me up while I was sleeping on deck.

“When we reached Pearl Harbor I was sent to RADAR school. The school was located in a barrack in the hills above Pearl. For a month or six weeks we trained to be RADAR operators,” he said. “After that I was assigned to a minesweeper, a small wooden ship that was 136-feet long with a crew of 34.“ 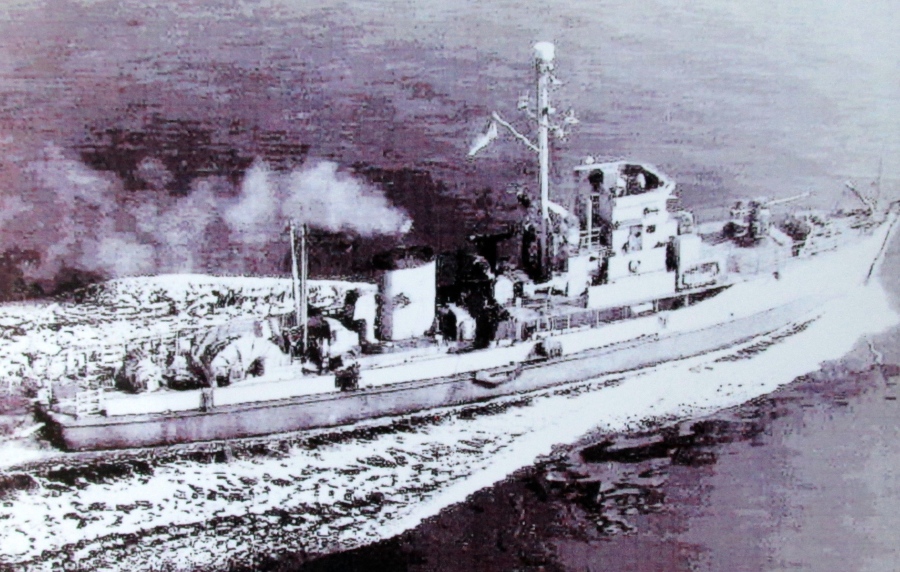 YMS-192 was the 136-foot, wooden minesweeper he served on during the end of the war in the Pacific. Photo provided

There were times during the final days of the war that Rieger believes he was lucky and escaped death just by the luck of the draw.

“We were still in Pearl Harbor preparing to become part of the invasion fleet when President Truman had two atomic bombs dropped on Hiroshima and Nagasaki. Several days later the Japanese surrendered,” he said. “If those bombs hadn’t been dropped we would have had to invade the Japanese home islands and I probably wouldn’t be here today.

“On the way to Japan a typhoon hit the coast on Oct. 30, 1946. It sunk seven minesweepers just like the one I was on. If we hadn’t stopped at Guam and stayed several days before sailing on to Japan we might have been in the middle of that storm and sunk like the other minesweepers.

“On our return trip back to Pearl Harbor our minesweeper escaped another disaster. She was struck by waves that were 25-feet high from an earth quake that caused a tsunami that struck the Hawaiian Islands. When the surge hit the islands the waves had grown to 50-feet. We just missed them.”

When he and the crew of the YMS-192 arrived in the harbor at Kobe, Japan the anchorage was a disaster. All of the ships in the harbor had been sunk by America’s air power and the surrounding town was flattened by the U.S. Air Corps.

“There were no piers left in the harbor. We had to come ashore in whale boats and beach them,” Rieger recalled. “There was a little boy about 10-years-old wandering around on the beach. We got to know him and he became our mascot.

“The little boy took us up into the hills around Kobe. In the hills we found a religious statue. The little boy spoke no English. We communicated with him using hand gestures.

“The whole time we were in Japan we lived aboard the minesweeper. You don’t live on a 136-foot boat like that, you just exist. Everything you do aboard ship you have to hang on to something.”

“We arrived back in the U.S. from Japan by way of Pearl Harbor. We got back in March 1946. The war had been over since August 1945,” Rieger said. “I missed all the celebrations held immediately after the end of the war.

“After reaching San Diego I took a train and went back to Great Lakes Reception Center to get discharged,” he said. “I joined the inactive Naval Reserve and five years later I was called back into the Navy as a RADAR operator aboard a destroyer during the Korean War. Our ship was part of a hunter-killer pack that was supposed to search and destroy enemy submarines.”

He spent 20 months aboard the ship beginning in 1951. They trained in both the Atlantic and Pacific, but were never sent to Korea during the war. The North Koreans had no submarines to destroy.

The war was over when this picture was taken. Note the campaign ribbon on his uniform. Photo provided

By the time Rieger was recruited for the Korean War he had graduated from Indiana University with a degree in civil engineering. He and his first wife were expecting their first child, a daughter , who was born while he was serving abroad the destroyer.

He and Irene, his wife, retired and moved to Englewood in 1995. They have three children: Steve, Julie and Dale. Their oldest daughter, Nancy, was a nurse who passed away at 44.

This story was first published in the Charlotte Sun newspaper, Port Charlotte, Fla. on Monday, Aug. 22, 2016 and is republished with permission.