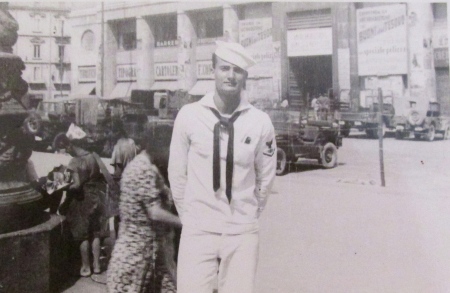 Radioman Lowell Biderman of Oyster Creek, Englewood served aboard the USS Pine Island at the end of WW II. Here he is standing in front of the Red Cross building in Naples, Italy during his voyage to show the flag around the world after the war. He was 19 when this picture was taken. Photo provided Lowell and his buddy S.B. “Barney” Barnes ride an elephant in Colombo, Sri Lanka while on a world tour aboard the USS Pine Island. Photo provided

By the time Radioman 3rd/C Lowell Biderman of Oyster Creek subdivision in Englewood left California headed for Japan World War II was over. The Nazis had surrendered in May 1945 and the Japanese in August of the same year after Atomic Bombs were dropped on Hiroshima and Nagasaki.

“We left the U.S. on Oct. 14, 1945 and arrived in Pearl Harbor on Oct. 28 aboard a troop transport, AP-137, USS Herald of the Morning. When we arrived in Pearl we were anchored where we couldn’t see any of the damage from the Japanese attack four years earlier,” The 89-year-old former sailor recalled more than 70 years later.

“From Pearl Harbor we took LST-938 and sailed for Sasebo, Japan. This is where we reached our ship— the USS Pine Island. She was a seaplane tender that had been converted to a meteorological station and she also had a huge radio transmitter aboard that was able to reach the U.S. from Japan or China,” Biderman said.

“While in Tokyo Bay we got leave to go ashore. What we saw that was rather frightening were the coastal fortifications the Japanese had built on shore to repel our invasion. There were lots of concrete tunnels and big guns.

“While walking through some of these tunnels we found Japanese swords, rifles and uniforms that had been discarded by the enemy. All of us picked up these things and took them home as souvenirs. I brought a Japanese sword, rifle and bayonet home with me. I lost them in a move after the war.”

“Tell me about the Japanese people. How were they when you went ashore?” he was asked.

“They were quiet and respectful,” Biderman said. “We had no problem with any of them.

“When we went into Yokohama we found it flattened by U.S. bombers. There was rubble as far as your eye could see,” he recalled. “Standing in the middle of all this rubble was a large metal safe that hadn’t burned and wasn’t wrecked. In addition, there were half a dozen concrete buildings that were still standing. We turned one of these buildings into a Red Cross headquarters.

“Whenever I hear people say we shouldn’t have dropped the Atomic Bombs on Japan, I think about how horrible that invasion would have been if we had been forced to invade the main Japanese islands,” he said. “The casualty rate on both sides would have been enormous. Because we were invading their homeland the Japanese would not have given up. As a consequence I have no qualms about the fact we dropped the bomb on them.”

Lt. Col. Paul Tibbets, who flew the “Enola Gay,” the B-29 that dropped the A-Bomb on Hiroshima, told this Sun reporter while visiting Punta Gorda some years ago: After they dropped the first bomb he visited Gen. Douglas Mac Arthur’s headquarters in the Pacific. While there he was told the general estimated one-million American servicemen would have been killed or wounded if we had been forced to invade Japan. And possibly as many as five million Japanese might have perished in that invasion.

Altogether in World War II, approximately 400,000 Americans were killed while serving their country in military uniform.

Tibbets told me, “I’ve been to Japan many times since I dropped the bomb. The question the Japanese ask me: ‘Why didn’t you drop the bomb earlier and end the war sooner?’”

After reaching Tokyo, Biderman and the USS Pine Island headed for Sasebo, Japan.

“Sasebo was located on the southernmost island of the three islands that comprise mainland Japan. It had the most beautiful natural harbor surrounded by mountains,” he explained. “All you could see strewn around the harbor were the masts and super-structures of all the ships sunk in the harbor by U.S. bombers. It was quite amazing.

“On Jan. 12, 1946 we headed for Shanghai, China. We were only there two days, but we got to go ashore. Inflation was wild. A pack of cigarettes would buy you anything. We left there on the Pine Island and reach Tsingtao on Feb. 21st.

“It was a tourist destination for the rich who lived in Shanghai,” he said. “We spent quite a while there showing the flag. Before we left we picked up a bunch of U.S. Navy personnel who were working on shore. We arrived in Hong Kong on May 6, 1946 and picked up more Navy people and headed for Singapore on May 13th. Two days later we sailed out of Singapore for Colombo, Sri Lanka, then it was on to Alexandria and Cairo, Egypt as we continued to show the flag.

“We arrived in Naples, Italy on June 10, 1946. Two days later we headed for Algiers on June 14. It was on to the Azores. We finally arrived back in Norfolk, headquarters of the U.S. Atlantic Fleet.

“When we got back to Norfolk I was put in charge of a group of sailors going back to San Diego by train,” Biderman said. “We got on a train pulled by a steam engine in our Navy whites. By the time we reached California a week later we were clad in Navy grays. The coal dust from the steam engine had turned our uniforms gray.”

He was discharged from the Navy in Jul46y 1946. He took the G.I. Bill and immediately enrolled at the University of Southern California graduating four years later with a B.S. in Business Administration.

Most of his civilian career he worked in the insurance field in the Toronto, Canada area. Biderman and his wife, Doreen, retired and moved to Englewood in 1995. He has two children, from a first marriage: Nancy and Mark, both live in the Toronto area.

This story was first published in the Charlotte Sun newspaper, Port Charlotte, Fla. on Monday, August 8, 2016 and is republished with permission.

Click here to view Biderman’s collection in the Library of Congress.