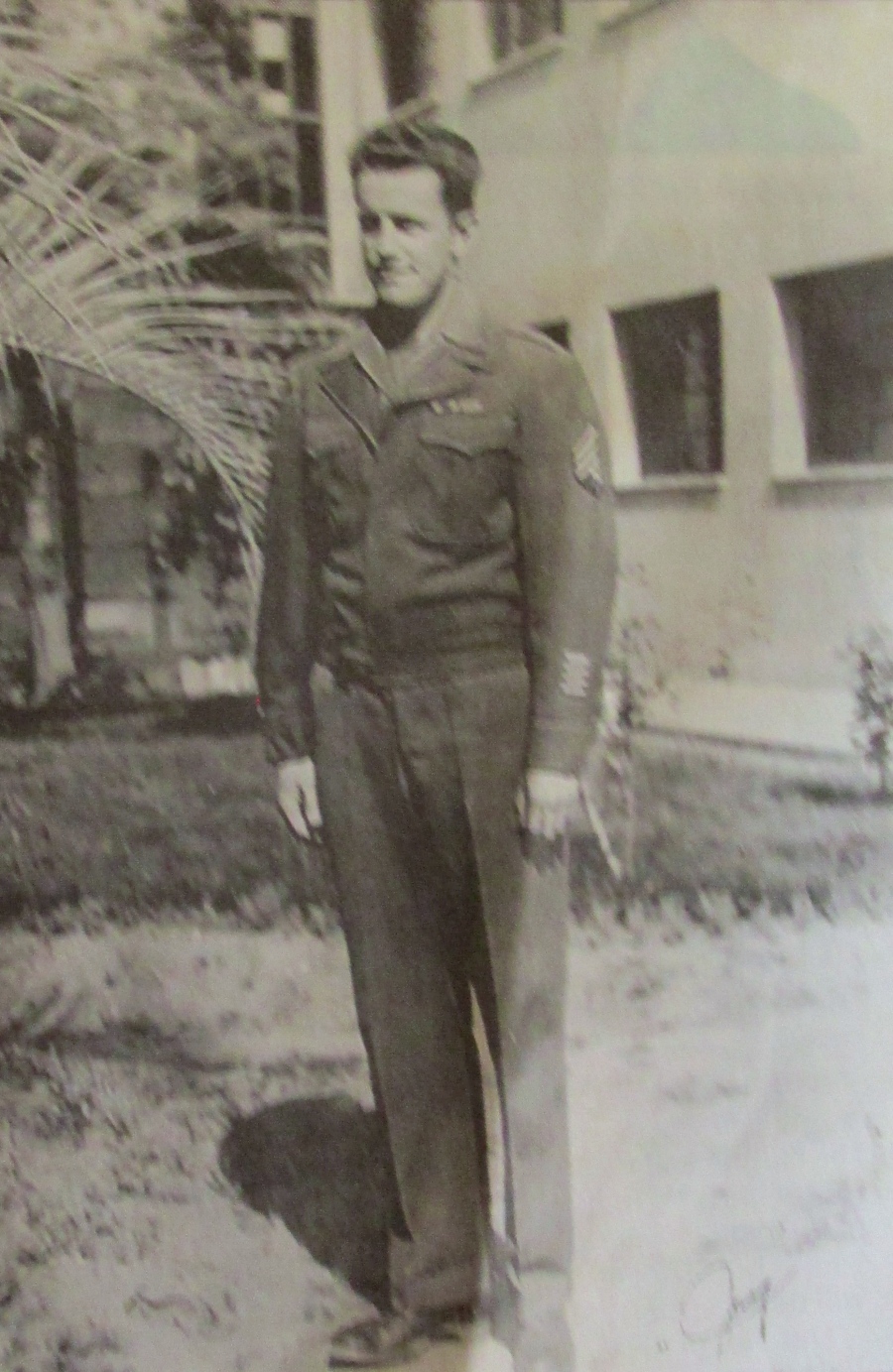 This was Jay Vredevoogd in 1944 when he was still serving with the 5th Army in Italy. Photo provided

It’s all a bit fuzzy now for 87-year-old Jay Vredevoogd of Port Charlotte, Fla. who served as an engineer in Gen. Mark Clark’s 5th Army in North Africa, Sicily and Italy in World War II. He was in many of the major battles during the Italian Campaign.

From the very beginning Sgt. Vredevoogd had luck on his side. Originally he was assigned to the 48th Combat Engineers. His former unit was wiped out on the beach at Anzio.

By the time he reached Oran, North Africa he was assigned to the 462nd Engineers attached to the 5th Army. Their job, to make sure the heavy earth-moving equipment—bulldozers and graders—were in place for use when needed.

Vredevoogd’s luck held from the first few weeks he and his new unit landed at Oran until he shipped out for the states from Northern Italy at war’s end. Every morning between 4 a.m and 6 a.m the Luftwaffe flew over and bombed Allied forces in North Africa.

“A few days after we landed a piece of shrapnel missed my head by inches. I dug it out of the sand behind me and kept it. The half-pound piece of iron from a German bomb was so sharp you could hardly hold it without getting cut. Eventually I gave it to my daughter,” he said.

The North African Campaign was mostly over by the time Vredevoogd and his engineering company arrived in February 1943. They were trucked to Algeria and then to Bizerte, Tunisia where they sailed for Sicily.

It was at Palermo, Sicily where Vredevoogd got his first taste of battle. He was assigned to take care of the equipment yard at Palermo when German bombers attacked.

“Soldiers from the 2nd Armored Division had just arrived a the Port of Palermo on a troop ship. Right beside the ship on the dock were stacks of 155-mm shells,” he recalled. “The German attack hit the ammunition blowing up the ship and the port area. It killed scores of soldiers. Seven boys were stationed on a gun mount in the bow of the ship when it blew up. They never found them.”

Vredevoog was in the thick of the carnage because he was in charge of the nearby equipment yard.

“There were arms and legs flying through the air. Some of those 155- mm shells blew six-foot holes in steel doors,” he said. “It was awful.”

Like thousands of other American soldiers who fought through Sicily, Vredevoogd went on to Italy. He can’t recall how he crossed the Strait of Messina to the Italian boot. About all he remembers is that it was at night.

Near Salerno is where he ended up shortly after most of the shooting was over in September 1943.

“Our men were massacred by the Germans because they knew we were coming,” he said. “Salerno was hell on earth. There was a line of ambulances a mile long of American soldiers killed on the beach at Salerno.”

Like any ground pounder who was there will tell you, Salerno was bad, but Anzio, in January 1944, was worse. The Americans were trapped on the beach by the German defenders for months and couldn’t break out.

“We were dug in like gophers. The Germans were shooting down on our men with 88s from the hills above. They could pick anyone off on the beach they wanted with their guns that were pointed down at us,” he said.

Vredevoogd’s prized possession from his war days is a Thursday, May 3, 1945 edition of “The Stars and Stripes.” It proclaims in 4-inch tall bold letters across the top half of the front page: “NAZI ARMIES IN ITALY SURRENDER.” The story that takes up the bottom half of the page written by Sgt. Howard Tubman and includes most of Page 2 begins: “The German armies in Italy and in part of Austria have surrendered—completely and unconditionally.

“This means that the bankruptcy of German aggressive policy and German arms has caused an old line Prussian military leader like Col. Gen. Heinrich von Vietinghoff and convinced a Nazi like SS Gen. Karl Wolff, the two commanders on the front who have surrender, to ignore Hitler’s and Himmler’s injunction—to fight to the end.”

By this time Vredevoogd had served three years and two months in the Army without a furlough. Based of his length of service and the major battles he had participated in his unit was one of the first to make it home after V-E Day (Victory in Europe).

But even going home was a challenge.

“Three days out of the port of New York, our troop ship went through a terrible storm in the North Atlantic. We were locked down in the hole,” he said. “At one point the whole ship was six-feet underwater. Sailors who were serving on the ship said we were lucky to have survived. 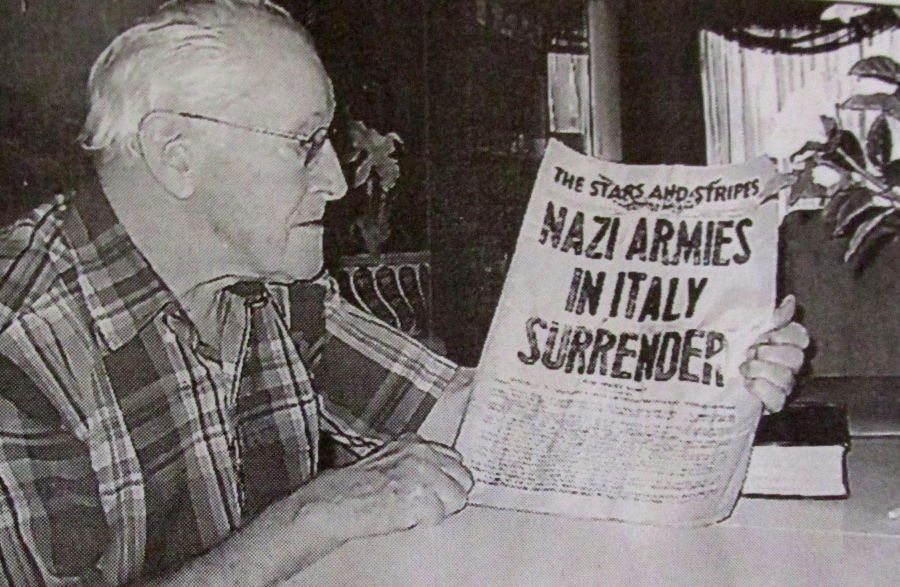 Former Sgt. Jay Vredevoogd of Port Charlotte, Fla. looks at the front page of ‘Stars and Strips’ for May 3, 1945 that proclaims: ‘Nazi Armies in Italy Surrender.’ He fought in Italy during the war. Sun photo by Don Moore

Like the rest of Vredevoogd’s military service, he lucked out once more.

“Lots of boats were there to meet us when we sailed into New York Harbor,” he remembered. There were also a bunch of German POWs bivouacked in a nearby park.

“They laughed at us. They told us, ‘We’ve been here all the while taking care of your girls’,” the old soldier said wistfully as he recalled the long-ago war he fought in as a young man.

This story was first published in the Charlotte Sun newspaper, Port Charlotte, Fla. on Monday, May 23, 2005 and is republished with permission.

Click here to view the collections in alphabetical order in the Library of Congress. This veteran’s story will not be posted on the site, as it was written long before Don started submitting his interviews to the Veterans History Project.

Jay E. Vredevoogd, 91, of Port Charlotte went to be with his Lord June 16, 2009. He was born October 8, 1917 in Grand Rapids, MI. Jay was part owner of the family furniture store in Grand Rapids until 1942; he joined the Army Corp of Engineers for 3 years serving in Africa, Sicily and Italy. After returning from World War II, he established his own furniture store for 10 years; for the next 27 years he was a Real Estate Broker. Jay became a permanent resident of Florida in 1985 and was a member of the First Presbyterian church of Port Charlotte.

A private funeral service will be held at a later date. Memorial donations may be made to TideWell Hospice of Arcadia, FL, 5955 Rand Blvd, Sarasota, FL 34238 or to the charity of ones choice. Please sign the online guest book. Arrangements are by Larry Taylor Funeral and Cremation Services.