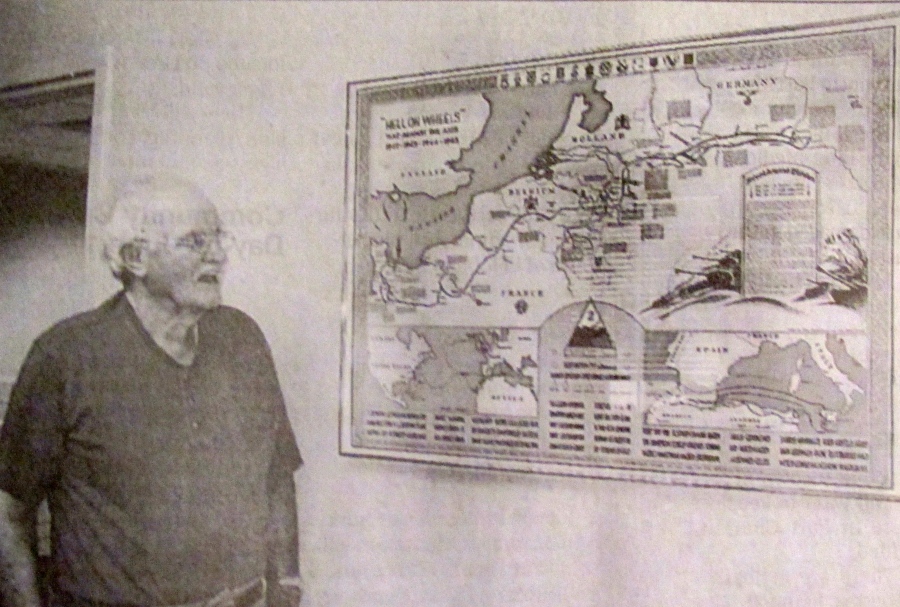 Bill Kilfeder takes a look at a map on the wall of his daughter's office at the Douglas T. Jacobson State Veterans Nursing Home in Port Charlotte, Fla. The map shows the route the 2nd Armored Division, his outfit, from the time it left the United States, Africa, fought in the Sicilian Campaign, made the Normandy Invasion and continued fighting through Europe. Sun photo by Don Moore

The 90-year-old vet was a member of the 2nd Armored Division — “Hell On Wheels” — during World War II. His unit was attached to Gen. George Patton’s 3rd Army in Europe.

Carentan was Pfc. Kilfeder’s high-water mark during World War II. This is where “Combat Command A,” of which his unit, the 66th Armored Regiment, I-Company, was a part of and went head-to-head with the 12th SS Panzer Division.

“Combat Command A” was sent to Carentan to support the lightly-armed 101st Airborne Division. The airborne troops would be run out of the town by the Germans when they counterattacked. The next day the 101st would hit the town with everything it had and take it back again from the enemy.

“The Germans didn’t expect us to arrive with tanks. We took Carentan and continued on past the town a half mile and dug in,” the old soldier said. “We had only been in Europe a week when we took the French town.”

The Germans threw everything they could at Kilfeder’s Sherman tank regiment during the sustained fight for that piece of real estate. By the time the shooting stopped, 100 percent of the Sherman tanks had been knocked out by enemy fire, 72 percent of the American officers and 43 percent of the enlisted men were killed or wounded in the battle.

Kilfeder was one of the lucky ones. The Sherman he was driving hadn’t received a direct hit from a German 88-mm gun at Carentan.

“I remember one of the places we stopped I picked up a dead German soldier’s wallet and found a four-leaf clover in it. The poor guy was done, so I figured I’d take it,” he said. “I kept it for awhile, but lost it somewhere along the way.”

Even so, Kilfeder survived the war.

In fact, he survived the North African campaign when he arrived at Oran, North Africa, in January 1943 a couple of months after the initial invasion. He started out in the artillery, but ended up at the “Repo Depo.” He was retooled into a gunner in a Sherman and sent to Sicily with Patton.

The only time he ever laid eyes on the fabled general was in the middle of the night when they were gassing up the Shermans. Patton pulled up in his staff car, rolled down the window and began talking to his troops.

“The guys were standing around his car saying, ‘Hi George, how’s everything?’ He didn’t care what they called him as long as his soldiers were in the action,” Kilfeder said. “They were kidding him and he was kidding them back. I was a new kid so I kept my mouth shut.”

After Sicily, the 2nd Armored headed for England and the pending Normandy invasion.

“On the way to England our ship went almost over to the U.S. We thought they were taking us back to the states,” he said. “We kept telling ourselves: ‘We’ve made two invasions and 80 percent of our people have malaria. We’re going home.’ It didn’t happen. We ended up in Liverpool, England.

“We hit the beach at Normandy with 42 tanks. We were all scared to death. The first day we got as far as the hills overlooking the invasion beach with our tanks,” he said. “I could look around from on top of the hills and at each intersection I could see a dead German laying over a light machine gun.”

The 2nd Armored and Patton’s 3rd Army raced across France after breaking through enemy lines along the coast. Shortly before the German counterattack at the “Battle of the Bulge” Kilfeder needed glasses.

“I went back for glasses. I guess I lucked out. When the doctors examined me they not only checked my eyes, but they put me in the hospital. Then they sent me back to England where I spent the next month in the hospital,” he said.

The part he didn’t mention was that before he could get his glasses, he was blown off his tank and had to return to England for some serious medical attention, according to Liz Barton, his daughter.

After his release from the hospital, he was reassigned to “light duty” at Supreme Allied Headquarters at Versailles, France, where Gen. Dwight Eisenhower reigned. Kilfeder’s time was consumed guarding German prisoners of war.

From there, he and Eisenhower relocated their headquarters to Frankfurt, Germany, where the two of them rode out the rest of the war. Because Kilfeder had taken part in three invasions and had been fighting Hitler’s soldiers since January 1943, he had enough points to make it back to the states and Brooklyn, where he grew up pretty quickly after the war.

He went to work for them in 1946. When he retired 20 years later, he was superintendent of a department with more than 20,000 employees. He was chauffeured around town in his own limo.

Not bad for a private first class who drove a Sherman tank for the 2nd Armored Division — “Hell on Wheels” — a long time ago.

This story was first published in the Charlotte Sun newspaper, Port Charlotte, Fla. on Thursday, May 26, 2005 and is republished with permission.