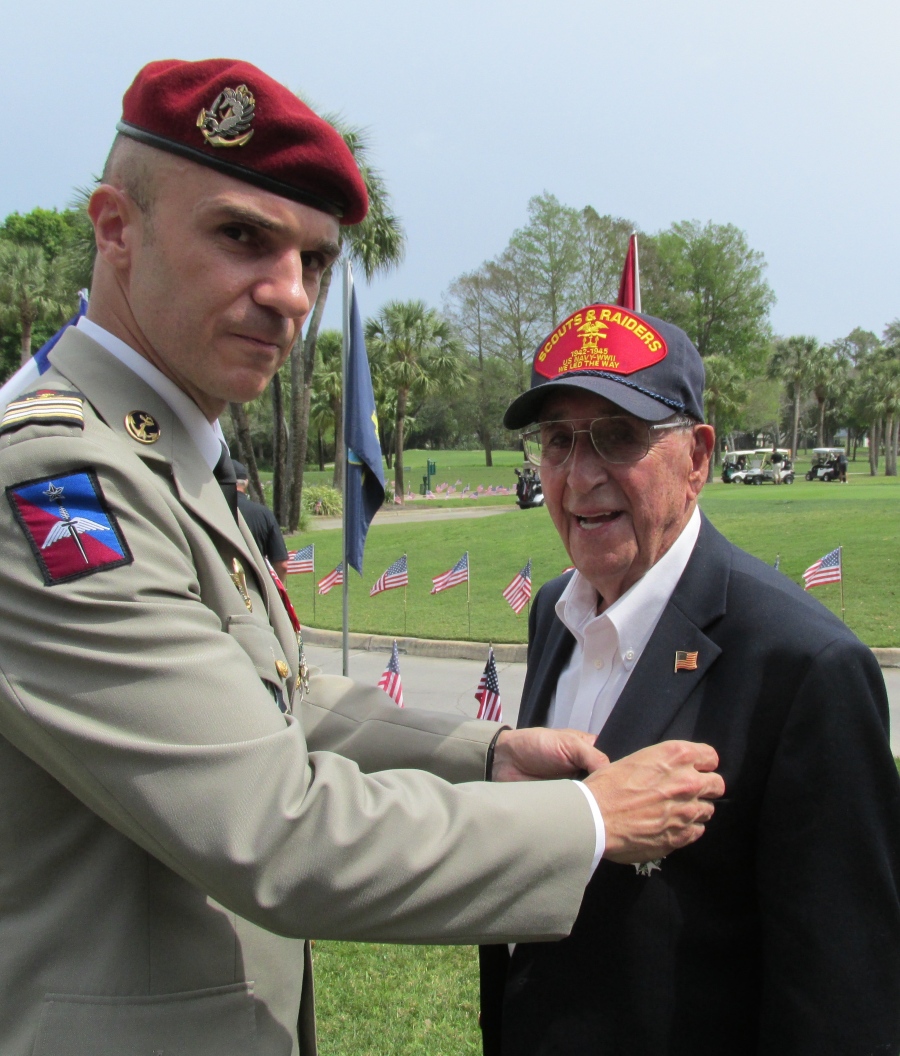 Lt. Col. Stephone Cutajar, French liaison at Mac Dill Air Force Base in Tampa pins French commendation on the breast pocket of Art Nicholas of Englewood during a ceremony at Boca Royale Golf & Country Club Saturday. The former sailor participated in the D-Day Invasion of Normandy, France on June 6, 1944. Photo by Don Moore

Art Nicholas of Englewood received France’s highest military decoration, “Knight of the Legion of Honor,” at a ceremony held Saturday at Boca Royale Golf & Country in Englewood, Fla. He was honored for his service to France and its people a lifetime ago during World War II.

The diminutive  93-year-old former sailor stood ramrod straight as Lt. Col. Stephane Cutajar pinned the elaborate five-pointed white and green enameled award suspended by a blood-red ribbon on the pocket of his blue blazer. The colonel is a liaison officer at Mac Dill Air Force Base in Tampa who represented the French government at the ceremony, 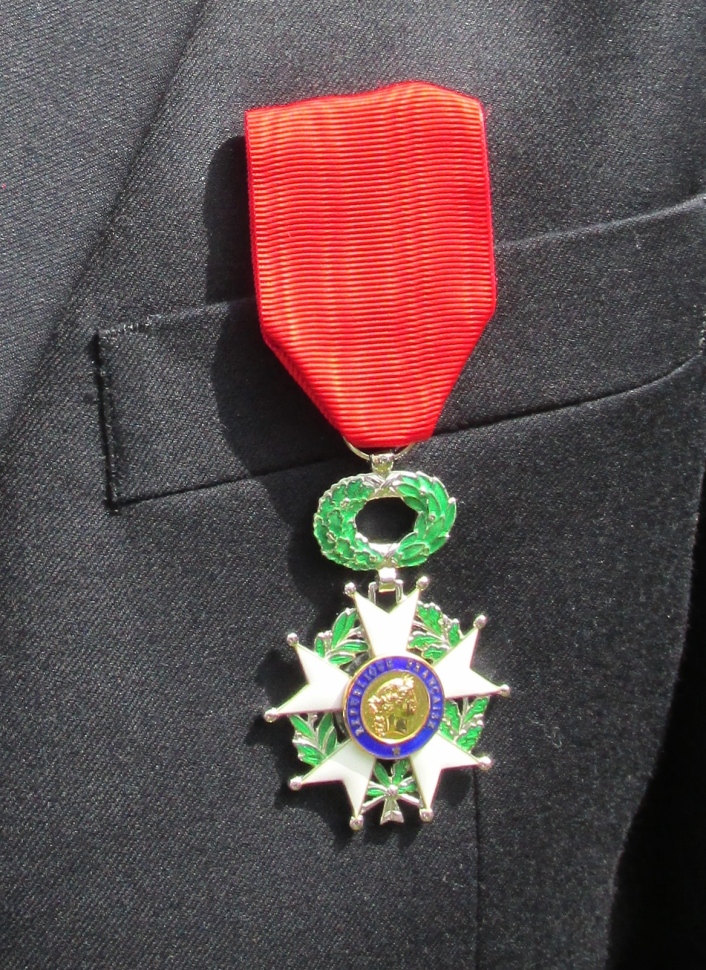 The “Knight of the Legion of Honor” is the highest military decoration awarded by the French government.” Photo by Don Moore

The award was established by Napoleon Bonaparte in 1802. It is the most import military decoration the French government awards. Since the Second World War approximately 93,000 of these medals have been presented to American servicemen who risked their lives fighting on French soil during war.

Nicholas was a boatswain’s mate who served aboard a landing craft (LCT-52) that made numerous trips to the beaches of Normandy, France on D-Day, June 6, 1944. For many days thereafter his ship brought equipment ashore to French solders on “Gold Beach” and American soldiers on “Omaha Beach” in Normandy as part of the Allied invasion of Europe ending Hitler’s grip on the continent more than 70 years ago.

He also took part in the Allied invasion of North Africa in November 1942. In addition, Nicholas helped build the Amphibious Warfare School in Fort Pierce as a member of the “Scouts & Raiders.” He trained members of the UDT (Underwater Demolition Team) in Fort Pierce, Fla. They were the forerunners of today’s Navy SEALS who conduct secret forays into enemy territory during conflicts the U.S. is involved in.

Commenting on his service to France, Lt. Col. Cutajar told the crowd attending the award ceremony, “America and France have been friends since the founding of this country. We fought side-by-side in World War I and World War II.”

The colonel explained, “The award Art Nicholas is receiving is the highest military commendation the French government gives an individual. The Knight’s Cross is given to men and women who fight to defend French soil.”

This was Art Nicholas in his 20s when he served aboard an LST-52 during World War II. Photo provided

As Nicholas walked to the podium to have the medal pinned on his jacket the audience stood and gave him a round of applause.

Attending the ceremony was his wife of almost 70 years, Hazel; daughter, Teri; granddaughters, Sami and Jen; and grandson, John.

At the conclusion of the 30-minute ceremony, Nicholas was asked how it felt to be part of a 200-year-old French military order? How was it being a “Knight of the Legion of Honor?”

“I’m not going to ask people to bow,” he said with a grin.

This story was first published in the Charlotte Sun newspaper, Port Charlotte, Fla. on Sunday, April 3, 2016 and is republished with permission.