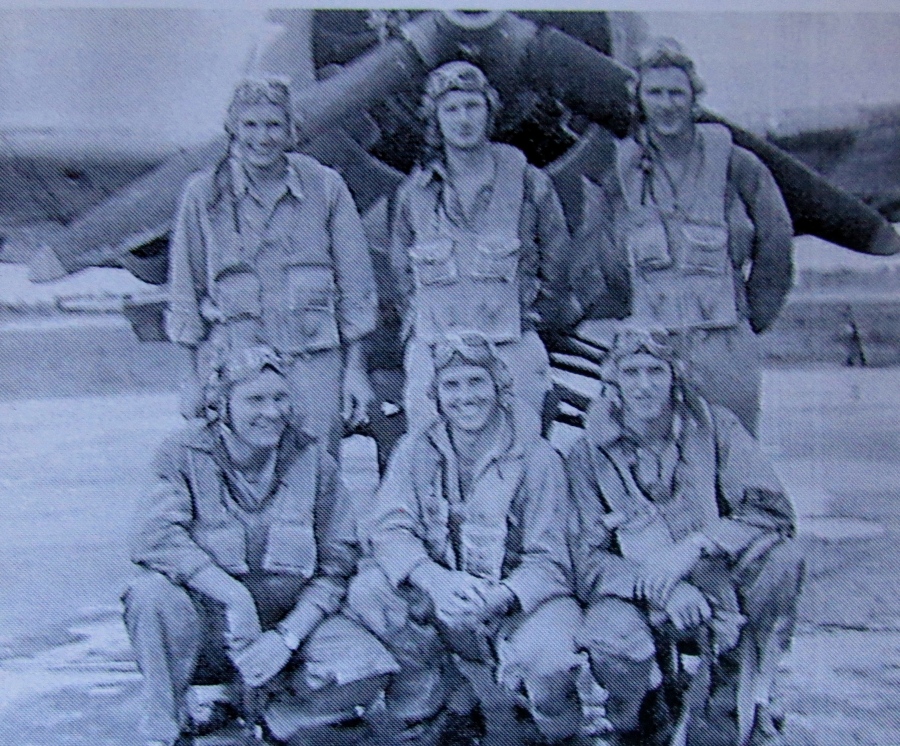 Lt. Schil, standing center, is pictured with his students at Sanford Naval Base after he returned from Guadalcanal. The fighter plane in the background is a Grumman F4F Wildcat. Photo provided

For Capt. Charles Schild (Ret.) of southwest Florida, World War II was divided into two parts — the uninteresting  part and the interesting part.

After graduating from Naval flight training at Pensacola Naval Air Station in January 1942, he arrived at Honolulu, Hawaii, in June of that year, shortly after the decisive American victory at Midway. The young ensign was busting to climb behind the controls of a fighter plane and fly into the wild blue yonder after the enemy.

It didn’t happen that way.

Before officially joining a Naval squadron as part of the Pacific Fleet, all Naval aviators had to qualify. They were required to take off and land on a carrier.

Ensign Schild’s qualification flight was a disaster. He and a buddy were flying in a Grumman Avenger TBF torpedo-bomber. Schild was in the back seat and his buddy was flying the plane on his first carrier qualification landing trying to gain acceptance into the fleet.

“When you’re flying onto the deck of a carrier there’s a terrific stack wash (caused by the exhaust from the ship’s smoke stacks). We were just about to hook the arresting wire when the stack wash blew us over the side and we went into the sea upside-down. We were picked up by a destroyer as we floated in our life jackets,” said Schild, now 85. “I didn’t get to qualify that day, that’s for sure.”

A Chance Vought F4U Corsair makes a smooth landing on the deck of a carrier with the help of a landing signal officer who guides the aircraft in. Photo provided

After Schild did qualify he was assigned to a TBF torpedo-bomber squadron aboard the aircraft carrier USS Enterprise headed for Guadalcanal. He wasn’t happy being a TBF pilot. He hated torpedo-bombers.

“It took us a month to sail from Hawaii to Guadalcanal in the Solomon Island chain,” Schild said. “When the big invasion day came on Aug. 7, 1942, the torpedo-bomber crews didn’t have anything to do. There were no Japanese ships at Guadalcanal so we had no targets. Our fighters and bombers had a great time strafing and bombing the two airfields on the island because they had no enemy opposition in the air.”

While waiting for a target of opportunity to arrive and winding his watch back on the Enterprise, things heated up for him and the rest of the crew. A Japanese bomber flying out of Rabaul, the main enemy base in the area, scored a hit on the carrier’s flight deck. The badly damaged Enterprise limped back to Pearl Harbor for major repairs.

All the while Schild was writing letters to his superiors and lobbying to get out of the Enterprise’s torpedo-bomber squadron and into a fighter squadron. His persistence paid off.

“I joined Lt. Butch O’Hare’s VF-3 fighter squadron. A short time later I was transferred to VF-11 aboard the Jeep carrier USS Chanango. Our unit was dropped off at Espiritue Santo in the New Hebrides Island chain. From there, we made a 650-mile flight to Guadalcanal, the absolute limit of our fighters’ range.

“We were located at Fighter Base No. 2 on Guadalcanal,” he recalled. “Now I was in a fighter squadron, and I was gonna have some fun.”

For the next three months the “Sundowners,” as the squadron was known, flew off the field on Guadalcanal. They covered the Solomon Islands flying fighter sweeps in their Grumman F4F Wildcats. The unit strafed and bombed enemy positions when they weren’t flying combat air patrols. It was what Schild had been trained to do, and he loved it.

In war diary he kept notes: “June 16, 1943: This was the big day. That’s when we learned enemy aircraft were headed our way. Frank Quady was the division leader and I was the section leader. We had four planes on patrol off Guadalcanal. Someone was always up just waiting for something to happen. We had the duty that day.”

“We were on patrol at 25,000 feet. We looked down and saw a whole flight of bogy dive bombers flying toward our shipping off Guadalcanal. They were after the supply ships and troop transports or anything else they could hit. I think there was 96 of them and four of us. So we said, ‘Tally-ho!’ and down we went after them.”

“I got broadside of one of the Japanese dive bombers. I opened up with my six machine guns too far away. I missed him,” Schild said. “I pulled up and looked around. Holy mackerel, the sky was full of (Japanese) Zeros. There were Zeros everywhere.

“I got a hold of one of them and bagged him. Then I got a second one. I was working on my third Zero, coming in on him at 2 o’clock. I was trying to get my gun site on him. But he was at 4 o’clock. He was gonna get me if I kept doing what I was doing.”

Wildcats were good, solid fighter planes, but they weren’t nearly as fast or maneuverable in most cases as the lightly armored Japanese Zeros.

“We had gotten some advance information that Zeros couldn’t stay with a Wildcat if it turned away from them and went into a steep dive,” he said. “I did just that and lost him on the way down. When I pulled out of my dive, he was gone. He couldn’t stay with me.

“I climbed back up and peeled off on another plane that went into a dive. Then I realized it was my wing man. He had a few words for me after I got on the ground,” Schild said with a grin.

“I think our squadron shot down 36 Japanese planes that day. The Navy, Marines and Air Force shot down all 96 enemy planes. None of them got through to the fleet,” he said.

An old, yellowed Associated Press newspaper article written by Clark Lee about the air battles in the Solomon Islands says it all. The headline reads: “96 Japanese planes bagged by Yanks in the Solomons in one day.”

The story reads: “AT SEA WITH THE U.S. FLEET OFF THE SOLOMON ISLANDS –Three more American Navy pilots fought their way into the winged circle of aces today when the United States won its biggest air victory of the war against Japan in which 96 enemy planes were shot down in a far-flung battle over Guadalcanal Islands and at sea by our task force.

“Forty-seven enemy planes were shot down by Navy and Army pilots and the remainder by aircraft fire. Our losses were eight pilots missing, three of whom were Marines.

“This is the greatest number of enemy planes shot down by our planes. The total bag was nearly as big as German losses in a single day in the Battle of Britain. The enemy has now lost more than 150 planes in the Battle of the Solomon Islands ….”

“We were told that our radar had picked up an incoming target. We were flying interception. I took the high road and my buddy took the low road around a bank of clouds,” he said. “I spotted a Mitsubishi-96, twin-engine bomber flying high and fast above me. I had a hard time catching up with him. He was flying at 12,000 to 15,000 feet.

“I finally got just a little bit above him and a little behind him. I made a run on him and opened up with my six .50-caliber machine-guns. I got him in the right engine, wing and fuel tank and he blew up,” he said. “All of a sudden, a parachute tumbled out of the debris and opened up.”

Schild said he was thinking, at the time, about the number of American fliers who had been killed in their parachutes while being strafed by enemy planes after their aircraft were shot down and they were descending in their parachutes. He decided to turn around and go back and check out the enemy aviator in the parachute.

“I wondered at the time, ‘What do I do about the enemy parachute?'” he said. “When I went back and looked, I discovered it wasn’t a person in the chute, it was a big box. I fired a few rounds from my guns and broke the box open. There was an aerial camera inside. The Japanese bomber had been on a photo mission to photograph our shipping in the harbor at Guadalcanal. My kill was confirmed by Allied coast watchers who saw the enemy bomber go down. That was an exciting day.”

After almost a dozen weeks of flying against the Japanese at Guadalcanal, Schild was rotated back to the States. He became an instructor at Sanford Naval Base, in Sanford, Fla. teaching already-trained pilots advanced tactics in F4F Grumman Wildcats.

By war’s end he had married his wife, Caroline, who was from Winter Haven, Fla. By then he was a lieutenant flying out of the Naval Air Station at Long Beach, Calif., and a member of Lt. Cmdr. Ronnie Hoyle’s squadron.

“Ronnie’s girlfriend was Ida Lupino, the movie star. She would drop him off at the base in her chauffer-driven car,” he said. “Ronnie was also a good friend of Errol Flynn.

“Our skipper got us invited to a party at Errol Flynn’s home up in the hills on Mulholland Drive in Los Angeles. It was quite a party. Flynn invited a bunch of starlets, too.”

Capt. Chalres Schild of Punta Gorda Isles holds a model of a World War II aircraft carrier as he explains how tricky it was for him and scores of other Naval aviators to landon their tiny decks six decades ago. Sun photo by Don Moore

At the end of the Second World War, Schild got out of the service, but he was recalled in 1948. He made it a 22-year-career when he rejoined the Navy, retiring as a captain in command of Air Transportation Squadron No. 1 at the Navy base in Patuxent River, Md.

Schild went to work for the Federal Aviation Administration for another 18 years after completing his service career. He become the principle pilot for Najeeb Halaby, director of the FAA, who later became the CEO of Pan American Airways and still later an advisor to the late King Hussein of Jordan. Halaby’s daughter married the king and was crowned Queen Noor of Jordan.

This story was first published in the Charlotte Sun newspaper, Port Charlotte, Fla. on Monday, Aug. 4, 2003 and is republished with permission. 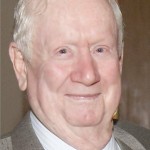 Charles was born March 27, 1918 in Monroeville, Ohio to the late Clarence C. and Clara (nee-Fish) Schild. Serving in World War II U.S. Navy, he enjoyed a successful career with the Navy and Naval Reserve and was awarded the Distinguished Flying Cross.

Retiring to Aurora, Colorado, he worked for the Federal Aviation Administration as an inspector before retiring once more and moving to Punta Gorda in 1977.

Charles was a member of Burnt Store Presbyterian Church, Punta Gorda, the Isles Yacht Club, and Elks Lodge 2606, both in Punta Gorda, and the Retired Officers Association. He is a former member of St. Andrews South Golf Club, Isles Civic Association, and the Quiet Birdmen.