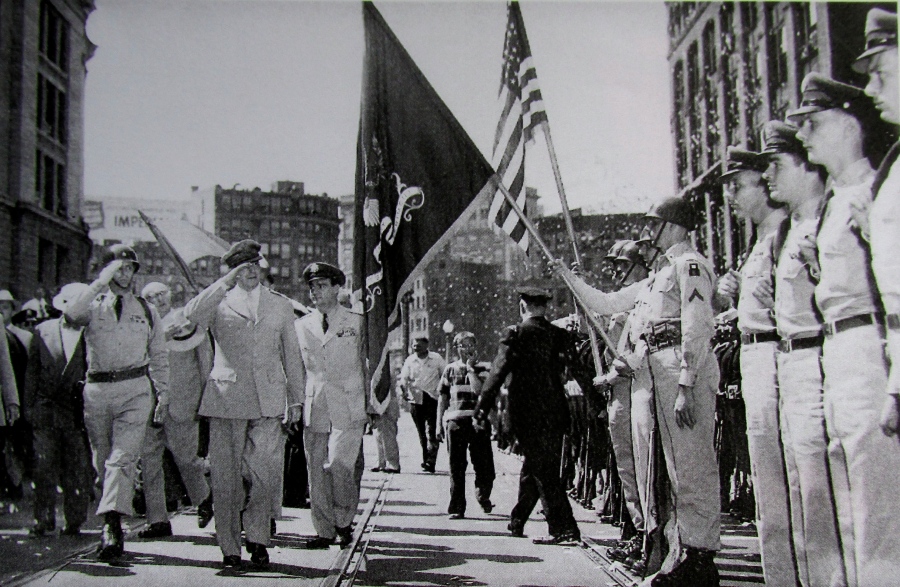 Gen. Douglas Mac Arthur (center left) salutes as he passes a color guard during a parade in his honor in Boston. The photo was taken shortly after he was fired by President Harry Truman as commander of forces in the Pacific during the Korean War era. Photo by Sgt. Patrick Farino

The pinnacle of Patrick Farino’s photographic career hangs on the wall in his home overlooking the Peace River in Punta Gorda, Fla. It’s a picture of Gen. Douglas MacArthur walking down a Boston street following a parade in his honor shortly after he was fired by President Harry Truman during the Korean War.

Farino was a staff photographer stationed at Army headquarters in Boston when the Army hero came to town. It was his assignment to take the general’s picture.

“MacArthur had just talked to a joint session of Congress when he came to Boston,” Farino recalled. His address to Congress was his ‘Old Soldiers Never Die’ speech while thinking about running for president.

“They had a big parade in Boston for the general. I was assigned to follow him around town and take his picture wherever he went,” he said. “His driver was a good friend of mine and he told me where to be and when. The picture was taken at the South Station Annex in Boston when MacArthur was leaving the parade and attending a soiree they were having for him.”

Farino’s military career began years earlier when he joined the Massachusetts National Guard in 1940 as a 17-year-old. In 1940 the guard was federalized for a year and sent on maneuvers to the Carolinas.

“We returned home on Dec. 1, 1941, less than a week before the Japanese bombed Pearl Harbor,” he said. “We were immediately sent to war for the duration.”

His guard unit became part of the Ameracal Division that fought in the South Pacific during World War II. Their first big battle was Guadalcanal in the Solomon Islands. 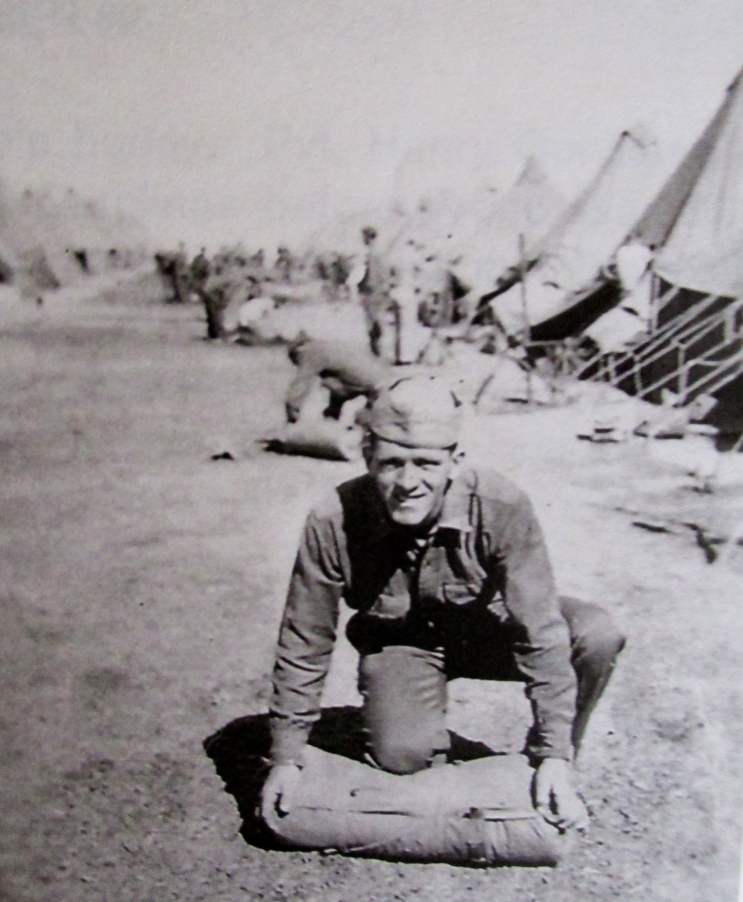 Farino’s buddy, Pvt. Henry Gonzalez of Boston, packs up while on maneuvers in the Carolinas before World War II. They were both in Company C, 182nd Infantry, Massachusetts National Guard. Even in those days Farino wanted to be a photographer. Photo by Sgt. Patrick Farino

“We hardly arrived on Guadalcanal and were dug in on the beach when they fought the Battle of Sabo Island. There were a lot of ships lost on both sides in that battle,” Farino said. “We watched artillery shells from enemy ships come over our heads like red freight cars. They were shelling Henderson Field which the Marines had just taken.”

War got more personal when they headed inland. Besides the enemy, American servicemen had to cope with diseases of all kinds. Malaria was a big problem for Farino and a lot of his buddies.

Month after month the Battle for Guadalcanal raged on. At one point the Japanese tried to reinvade the island by sending more reinforcements to their troops who were hanging on by their fingertips.

“Our intelligence cracked the Japanese code and knew they were coming with their invasion force,” he said. “They caught them on the beach and a fierce battle ensued.

“When we first went into Guadalcanal we were set up on a ridge in the jungle. Before we got settled, a Marine came walking toward us from the enemy side,” he said. “We asked him what he was doing and he said filling his canteen from a stream farther down the hill.

“We gathered up all our canteens and 20 or so of us went down the hill to fill them up when we got cut off from our unit by the Japanese. There was nothing we could do but try and fight our way back to our lines. I grabbed a BAR (Browning Automatic Rifle) and killed three of them,” he said.

The 20 soldiers who had gone down to the hill to fill their canteens with water made it back to friendly territory, but not before they lost three men, including their platoon leader, a young lieutenant.

After some six months of fighting the Ameracal Division, with help from the U.S. Marine Corps, cleared Guadalcanal of Japanese. After that they took some time off on Fiji and then went on to the Battle on Bougainville.

“On March 10, 1944, the Japanese attacked us on Hill 260. It was a jungle outpost with a 100-foot tall observation tower atop a banyan tree,” Farino said. “The Japanese hit the 2nd Platoon and knocked us off the line.

“For the next 18 days we fought them to recapture the hill. By the time we took it again they had dug tunnels all under the hill,” he said. “We killed most of them with flame throwers, but we took a few prisoners.”

After Bougainville, Farino had amassed enough points to come home. After a 90-day leave he decided to stay in the service and went on to Army photographic school at Fort Monmouth, N.J. After graduation he was stationed at Army headquarters in downtown Boston for the next 17 years of his military service.

“If I hadn’t done that they would have shipped me out after three years,” he said half a lifetime later. “Over the years I shot pictures of more generals, more politicians and more movie stars than just about anybody.”

In January 1973, 1st Sgt. Patrick Farino retired from the United States Army after 26 years of service. A few years later, in 1980, he moved to Punta Gorda and built a round, two-story house that can be seen from A. W. Gilchrist Bridge off to the east in the distance along the river’s south shore.

Farino looks at some of the thousands of pictures and negatives he took while he served as an Army photographer. He had some 50,000 personal photos beginning shortly after World War II and running until the middle of the 1970s. Sun photo by Don Moore

“Over the years my camera got me into many places,” the old soldier said with a smile. 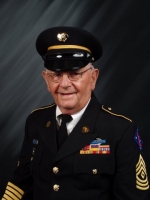 He was born July 20, 1921 in Tewksbury, MA, one of fourteen children of Gabriel and Marsina (nee Lutrario) Farino and moved to this area in 1980 from Woburn, MA.

He retired from the Army after 26 years of service as a First Sergeant, starting his service with action in New Caladonia, Guadalcanal, Fiji Island and Bougainville, finishing his service in Woburn, MA where he was a photographer and recruiter.

He opened a photography/jewelry business and accumulated a collection of over 45,000 negatives which he donated to the Woburn Public Library where they present the “Farino Collection” every three months to view various photographs of activities in Woburn.

Patrick was well known for his “round house on the river” open house poker games, love of dancing, playing bocce, and bowling.

He was a past president of the Punta Gorda Lions Club, a former President of the Italian American Club of Punta Gorda; a past director of the Sons of Italy of Port Charlotte, a member of the Military Order of Purple Heart, Punta Gorda Elks, Retired Enlisted Association, American Legion, Disabled American Veterans, Veterans of Foreign War, and the National Rifle Association.